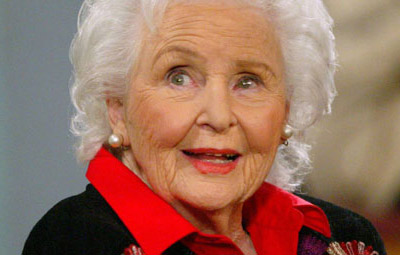 Alice Horton (née Grayson) is a on the "", played by . She is an original cast member, having appeared on the Days since the very first episode on , . In , Ms. Reid was dismissed from Days of our Lives in the Salem stalker storyline, however due to fan outrage, she and many other veterans returned a few months later. She took a lengthy absence from the show when she last appeared on , after many months some people assumed that Ms. Reid had left the show, however she returned on for the Brady barbecue. Frances Reid since her return appears only sporadically due to her age and her fragile state after a minor stroke, Alice Horton now appears at around two episodes a year, producers also wanted Frances Reid to appear in the episode, however Ms. Reid did not come to tape the episode. Producers are hoping that Frances Reid will appear in the annual Christmas episode.

Alice is the Horton family matriarch. She was born and bred in Salem to a blue-collar family, her father, Sid Grayson was a failed carpenter. Alice then met at high school, they were childhood sweethearts and married in a small civil wedding at Salem city hall in 1930.

Alice and Tom had five children: Tommy, Addie (deceased), Mickey, Bill and Marie. Alice and Tom raised their granddaughter Jennifer after her mother, Laura, was institutionalized.

Alice Horton first appeared on the very first episode of "Days of our Lives", on , . Alice was the traditional and lovable housewife, all of her children had grown up and had their own complicated lives and was always there for help. On the first episode, Alice was busy discussing the wedding plans of her daughter, to her fiance Tony. What Alice didn't know was that her granddaughter, had been arrested for stealing some fur from a department store. Tom thought it best not to worry Alice. Alice was forced to accept that her children had grown up and watched their struggle over the years, trying to lead a good life.

Things became odd when the disfigured Dr. Mark Brooks (who had lost his memories) came to Salem in , he practices at Salem university hospital and fell in love with Alice's daughter Marie Horton, however Alice was always fascinated with Mark because he had similar eyes to her son Tommy who was presumed dead. Tom and Mickey did some digging and found proof that Mark Brooks was Tommy Horton, then he had re-constructive surgery on his face. Tommy broke of his relationship with Marie and rebuilt his relashionship with the Hortons. Alice and Tom had to share the grief of their eldest daughter's diagnosis of and in , things got worse when Addie was hit by a truck as she pushed the buggy carrying her daughter Hope out of the way. In , Alice was shattered when she discovered that she had cancer from Dr. Walter Griffin. Alice's faith in God was tested greatly, everyone was shocked as Alice was a good and honest woman and it was surprising that this could ever happen to her as a good Christian woman. However, Alice's son Bill (who was a doctor) discovered that it was mis-diagnosis, as Dr. Griffin had been too hasty as his wife died from cancer. Later in the year, Tom had a heart attack and Alice's daughter Marie who was now a Catholic nun, returned home to care for Tom, this left Alice jealous, but Alice managed to overcome the envy.

In 1983, Alice was almost killed by a robot at Salem hospital which was being used to dispense medication, it turned out the robot had been tampered with by Alex Marshall, who was working for . The same year, Roman Brady was accused of the Salem Slasher murders, Alice knew him to be innocent so drugged doughnuts she brought him, she later blocked the road along with so Roman could escape while being rushed to the hospital. reluctantly had to arrest Alice however Alice was later released. In , Alice was unhappy that her granddaughter Hope was choosing to marry Larry Welch due to her Father Doug and sister Julie's approval, Alice knew Hope's heart lay with Bo but Alice's words of advise did not swing Hope's mind so Alice and Bo kidnapped Hope and Bo reveled his feelings. Alice and Tom also tried to foil Larry and his boss's plans when they discovered they were involved with a criminal organization.

In , Tom and Alice had their granddaughter, Jennifer stay over but trouble hit Salem when Alice's former partner, Dr. Simon Hopkins came in . Simon tried to rekindle his romance with Alice but Simon was also working at Salem university hospital to get an important disc for Victor Kirikais, when this was discovered as well as his part in the attempted killing of Harper Deveraux, he was soon wanted for by the police, he tried to take Alice hostage however he was shot and Alice was saved. In Alice suspected Tom of having an affair as he was always late and lied about where he had been, however Alice discovered that Tom was good intentioned, he was really writing a love poem, Alice and Tom made up with Alice being touched by Tom's words.

In , Alice discovered that she and Tom weren't legally married due to he judge who has married them was not sworn in and Tom had known all along - their marriage was null and void. Tom proposed to Alice and they soon married again in glory.

Alice and Tom had been together more than 60 years when he died in 1994. She continues to lend a kind ear, loving heart, and sage advice to the family and friends who surrounded her.

Alice is the quintessential mother, whose trademark is unconditional love and loyalty. After her children and grandchildren left the house, she became the Director of Volunteers at University Hospital. When the Community Center burned down, she convinced Tom to open up their home as the new community center. Alice is also well-known for her baking prowess, and her homemade doughnuts are legendary in Salem. Alice also started the tradition of reading to the children stuck in the hospital for Christmas.

Tragedy struck for Salem in 2003 when it beloved citizens were being killed one by one, and Alice's beloved daughter-in-law, was killed in her own home along with Mickey being injured. Celeste had a premonition which she discovered that another Horton was to die. Alice tried to get Celeste to contact the killer but they were interrupted by an upset Marlena who had been grieving for Doug. Alice visited Tom's grave one day in 2004 and discovered a note that Doug had left by Tom's grave with Marlena's name written in blood. Marlena was just late in getting the note and hacked into the security system were she saw Alice had found the note. Marlena, the Salem stalker went to the Horton house and confronted Alice with a dagger but Marlena was chased out by Tom's ghost. Marlena later broke into the house, she was reluctant about killing Alice because they had been close friends for many years Alice saw Marlena as part of the family. Marlena choked Alice on her famous doughnuts but Alice had phoned John and told him everything, Marlena later died in an escape attempt. Marlena awoke in a place very similar to Salem and saw Alice, Alice explained that they weren't really dead and all the Salem stalker victims were being kept by an unknown assailant, which turned out to be , posing as Tony, they all escaped and returned safe and sound to Salem.