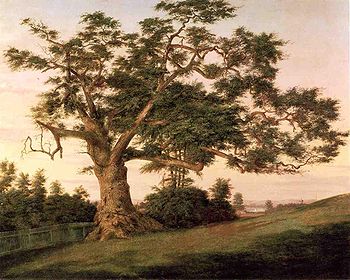 The Charter Oak was an unusually large white oak tree growing, from around the 12th or 13th century until 1856, on what the English colonists named Wyllys Hyll, in Hartford, Connecticut, USA. Its name derives from its importance as a legendary symbol of American independence (specifically, autonomy from England) from the story of how Connecticut's constitutional charter had been hidden within the hollow of the tree to thwart royal-ordered confiscation by English authority. This document is what earned Connecticut its nickname as the Constitution State, and the Charter Oak is commemorated on the Connecticut State Quarter.

The Dutch explorer Adrian Block described, in his log in 1614, a tree, at the future site of Hartford, understood to be this one. In the 1630s, a delegation of local Indians is said to have approached Samuel Wyllys, the early settler who owned and cleared much of the land around it, encouraging its preservation and describing it as planted ceremonially, for the sake of peace, when their tribe first settled in the area. Scions of the tree still grow in Hartford. 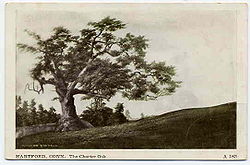 1906 postcard based on the painting

The name "Charter Oak" stems from the local legend in which a cavity within the tree was used in late 1687 as a hiding place for the Constitution charter. The oak was then blown down in a violent storm about 150 years later and made into a chair that is now displayed in the Hartford Capitol Building.

This much regarding the charter is history:

According to the dominant tradition, Andros demanded the document and it was produced, but during ensuing discussion, the lights were doused, concealing the spiriting of the parchment out a window and thence to the Oak by Captain Joseph Wadsworth, ancestor of Elijah Wadsworth.

Two seldom cited documents, one contemporaneous and one from early in the next century, raise less dramatic possibilities, by suggesting that a parchment copy had been made of the true charter as early as June, in anticipation of Andros's arrival:

Andros was overthrown in Boston two years later, in the 1689 Boston revolt. The Dominion of New England was then dissolved.

Depictions of the tree 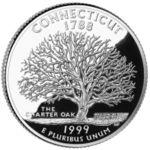 The Charter Oak on the Connecticut quarter.

The desk of the Governor of Connecticut, as well as the chairs for the Speaker of the House of Representatives and President of the Senate in the state capitol were made from wood salvaged from the Charter Oak.