Superman For All Seasons

Superman For All Seasons

Supercbbox| title = Superman For All Seasons 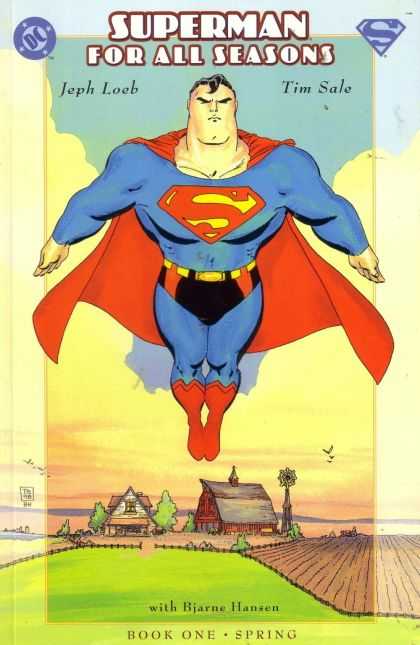 "Superman For All Seasons" was a 4-issue written by with art by Tim Sale, and was originally published by in 1998. This was made hot off the heels from their previous success, "", and as that -story dealt with holidays as the theme, this story's theme dealt with seasons. The artwork contains many influences from that of . The story also parallels the events from Superman's then-origin story 's "The Man of Steel".

Narrated by , he makes a point that before he was "" or "the Man of Steel", among others, was a farmer's son. After dinner, asks Clark what seems to be wrong, he replies it is nothing. Afterwards, the Kents discuss their son, with Pa Kent revealing he is afraid over what Clark could become because of his growing powers. They don't think Clark could hear them, but in his room, Clark hears every word. After school, Lana, Clark, and go to a store until Clark remembers his haircut appointment. When he is there, he realizes he can see through the wall, and his hair makes a barber's scissors break apart. A tornado strikes Smallville, and Clark helps out by saving a man before the gas station he is in explodes. Afterwards, Clark wonders if he could have done more. Talking to a pastor, the one question he asks him is if one man could do more. After graduation, Clark finally reveals to Lana that he can fly. In talking that he wants to help people with these powers, Lana tells him that he must leave Smallville, and then they kiss. Dressed up, Clark says goodbye to his parents before leaving to go to . Getting a job with the , having a crush with reporter , and wearing the costume his mother made, Clark makes headlines as Superman. In his building, knows it is going to be a "long, hot summer".

Narrated by , she makes a point that the rules that made her a newspaperwoman went out the window the day Superman appeared. Superman stops a nuclear missile from hitting the city, then single-handedly delivers the submarine which fired it to the armed forces. He threatened the man whose company manufactured the two: Lex Luthor. Then, Lois is threatened at gunpoint by one of the terrorists of the submarine. Superman quickly ends the situation, and takes Lois back to the Planet. In his apartment, Clark begins to feel lonely, so he goes back to Smallville to have dinner with his parents. Meeting with Pete again, and being thanked by friends who becoming what he became in Metropolis, he is disappointed that Lana had left some time before. He feels out of place, and sad that Smallville is different, but Ma Kent points out that it is all part of growing up. Back in Metropolis, a factory explodes and Luthor's "Guardians of the Sky" men in s arrive to stop it. Superman arrives, and notices that the exosuits forgot about a woman trapped inside. He saves the woman and puts out the fire single-handedly. Later, Luthor meets the woman whom Superman saved, Miss Vaughn, who is obsessed with Superman, for his own plans.

Narrated by , he considers his story to be a love story, between a man and his city. After a night in jail, that was when his revenge against Superman started. Miss Vaughn is part of his plan; drugging her to she can see nonstop images of Superman. Lois checks around Clark's desk and finds his notes with "L.L." on them. She wonders if they mean "Lois Lane", but Clark comes up behind her and reveals "Lana Lang". The Daily Planet is so gassed, with Lois and many others experiencing rapid pulse and high fever. Changing into Superman, he finds a train about to have an accident until he stops it, before talking to Prof. Crosby that the only person who could help is Luthor. Confronting him, he asks Luthor for help, when he reveals his "hope" in the form of Toxin; Miss Vaughn. With no choice, he helps Toxin with the antidote by spreading it into the clouds so it can pass on through the rain; everyone is cured. But, Toxin dies unexpectedly when they return to . Through his words, Luthor makes Superman believe that it is him that caused Toxin's death and more if he continues on, and tells him to go back to where he came from. Back in Smallville, Clark returns home.

Narrated by , she reveals she wanted to marry the boy next door, and become Mrs. Lana Lang Kent. But it was when she found out what he could do, that it felt like her dreams crashed down. In Metropolis, Lex feels that Superman being gone is exactly "what it should be", while Lois starts to think of something that becomes dismisses because it is stupid: Clark IS Superman. Clark and Lana have a good time together and meeting back with Pete, who mentions to Clark and Lana how wrong they are not moving on. The Kents and Lana have dinner when news comes in of a flood. When Lana mentions how they still have a man who can "change the course of mighty rivers", Ma and Pa Kent are shocked to learn that she "knows". Over a father-son talk, Clark mentions that he thought he could but that he can't do anything, but Pa Kent has him learn that he has limits and that he has to work with them. The next day, Pa and Clark Kent (wearing his Superman costume) go out to help the town against the flood. Before leaving, Lana makes it clear that even though her dreams were "yanked away", the boy she knew is still under Superman's costume. As townspeople watch, Superman saves the day for all places of Smallville such as fixing a damaged dam with just trees and boulders. Lana and the Kents get themselves into an accident, and almost drown, until Superman arrives. He goes out again to save his father, and once more to save their family dog. The night later, the words of Smallville's pastor, that the seasons may be grim but helps us with the future, makes the townspeople happy, including Clark. Back in Metropolis with his article on the front page, Superman wants one of Luthor's exosuits to send Luthor a message: he's back. He saves a kid he had saved before, and introduces himself as Trevor, though people call him "Trev". Superman replies that "folks call me Superman".

"Superman For All Seasons" was conceived, like all of the / books from and rival , as a stand alone, self-contained story that gave a sense of the character of and his supporting cast. Not an origin, but picking up on who the character is and how he came to be. The important part of the project, like many others, was to show the hero in a light so that the reader cared about him. [http://westfieldcomics.com/wow/order_main.html]

As explained by Loeb, one of the things that he wanted to capture was the grandeur that is Superman, and that was to have double-page spreads with big sky shots. With Sale and on the art and colors, everyone was speechless once Loeb saw the pages, and those same pages came in the office of DC. One of the biggest examples was the end to the first issue, with and looking out at a sunset from their farm. The shot was two pages long.

Perhaps the most important, and the key, to the series was the narration. Originally, Loeb never intended to have a narrator, but he knew he didn't want Superman to narrate from his point of view. As he explained; "I didn't feel comfortable being inside the head of an icon." So it was decided to have others narrate and give their point of view on Superman, rather than Superman on himself. Pa Kent gave his life as a father to a super-powered son, while not knowing what lied ahead of Clark, had confidence that his son would be alright. This in turn, came from Loeb himself as the father to his son, . was the impact of Superman's presence and on the idea of Superman in general, was about how his rivalry with Superman was like a love story between him and , and finally gave and explained the heroism of both Clark and Superman. [http://superman.nu/superman-comics/about/seasons/]

"Superman For All Seasons" was highly praised by fans and critics. Readers found that it was the themes and messages from the writing and art that really hit it home. One of its examples was its great metaphor for the coming-of-age, the end of childhood and the acceptance of your place in the world. [ [http://www.comicsbulletin.com/reviews/109540940459424.htm Superman For All Seasons Review - Line of Fire Reviews - Comics Bulletin ] ] People also found how took the best elements from 's onto the modern Superman mythos (this was before DC's Superman stories that would contain all the elements from the Richard Donner/ Superman films such as and ) was done in a very good way. [ [http://www.pulpsecret.com/post/7692/review-a-day-9-superman-for-all-seasons Review-a-Day #9: Superman For All Seasons | Pulp Secret - Comics News and Reviews ] ] "Comic Geek Speak", a comic book and any fan-related fan site, had "Superman For All Seasons" as one of their Book of the Month episodes.

The / from "For All Seasons" has reappeared twice after the series ended. The first time was in a Tim Sale-focused issue of the short-lived Solo series. The story titled "Prom Night", which returned Sale with writer , focused on Clark picking up as his prom date. The second time, also with Loeb & Sale, was in a short story found in the twenty-sixth issue of titled "Sam's Story", where Superman recounts his friend from high school who died of cancer when he was very young. The "Sam" character is based on Jeph Loeb's son, also named Sam, who died from the same illness.