The municipalities of Cully, Epesses, Grandvaux, Riex and Villette (Lavaux) merged on 1 July 2011 into the new municipality of Bourg-en-Lavaux.[1]

The earliest traces of human activity in Cully comes from the Neolithic, when Lake Geneva was near the modern port of Moratel. During the Roman Empire, the route from Lausanne to Great Saint Bernard ran through the area. From this time, some walls and coins have been found preserved.

The first written mention of the place took place in 967 under the name Cusliacum.[2] Later appeared the names Cusliaco (12th century),Custiacum (1154),Cullie (1226),Cully (1275)and Culyer (1383 ). The origin of the name is not clearly understood. It is possibly derived from the Roman family name Coclius.

The first document involving Cully, saw it given to the King of Besançon. However, because Cully at the same time was under Villett parishe, which belonged to the bishop of Lausanne, there were constant disputes which led in 1246 to it being given back to the bishop of Lausanne. In the 14th Century the inhabitants the acquired the right to hold a weekly market and fortify the village.

With the conquest of Vaud by Bern in 1536, Cully came under the administration of the Bailiwick of Lausanne. After the collapse of the Ancien régime, the village belonged from 1798 to 1803 during the Helvetic Republic to the Canton of Léman. In 1798 Cully Lavaux became the capital of the district, as it was in the central part of the district. It was not until 1824, that Cully attained the status of an independent political community. A project to merge the independent municipalities Cully, Epesses, Riex, Grandvaux, and Villette (Lavaux) failed in a vote on 27 February 2005 do to the resistance of the population of Grandvaux. The project is therefore not being pursued.

Cully lies at an average altitude of 387 m (1,270 ft), 8 km (5 mi) east-southeast of the canton capital Lausanne as the crow flies. The village is located in the Lavaux, on a slightly projecting outcrop into the Lake Geneva headland, at the foot of the vineyards of Mont de Gourze.

Of the built up area, housing and buildings made up 13.9% and transportation infrastructure made up 10.5%. while parks, green belts and sports fields made up 2.1%. Out of the forested land, 7.1% of the total land area is heavily forested and 2.1% is covered with orchards or small clusters of trees. Of the agricultural land, 11.8% is used for growing crops and 16.4% is pastures, while 35.7% is used for orchards or vine crops. All the water in the municipality is flowing water.[3]

The municipality was part of the Lavaux District until it was dissolved on 31 August 2006, and Cully became part of the new district of Lavaux-Oron.[4]

The municipal area covers a section of the Lavaux at the northeastern shore of Lake Geneva. The land extends northward from the shore across the narrow riparian buffer strips and the slopes of the Lavaux, with the eastern boundary runs along the creek "Champaflon" then to the southeast to the Jorat plateau. In the northeast, the area extends to theMont de Gourze, which at 925 m (3,035 ft) is the highest point of Cully. In the area of Cully is the watershed between the catchments of the Rhine and Rhône only just 2 miles (3.2 km) north of the shore of Lake Geneva. The extreme north of the municipality is the Broye River leading to the Rhine.

Cully includes the hamlet Chenaux at an altitude of 530 m (1,740 ft) on a ridge in the vineyards above the village and a number of individual farms on the plateau. Surrounded by Cully are Grandvaux, Forel, Riex and Epesses.

The blazon of the municipal coat of arms is Per fess Argent and Gules, a Grape Bunch counterchanged.[5] 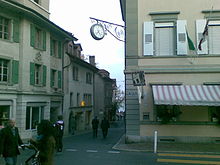 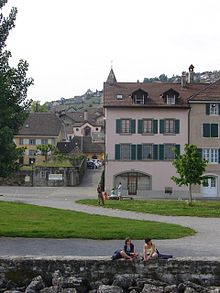 As of 2000[update], there were 672 people who were single and never married in the municipality. There were 888 married individuals, 122 widows or widowers and 116 individuals who are divorced.[8]

As of 2000[update] the average number of residents per living room was 0.57 which is about equal to the cantonal average of 0.61 per room.[6] In this case, a room is defined as space of a housing unit of at least 4 m2 (40 sq ft) as normal bedrooms, dining rooms, living rooms, kitchens and habitable cellars and attics.[10] About 35.2% of the total households were owner occupied, or in other words did not pay rent (though they may have a mortgage or a rent-to-own agreement).[11] 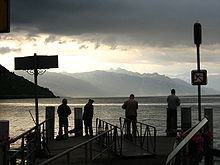 Cully was until the beginning of the 20th Century, a predominantly agricultural village. Even today, the vineyards on the slopes of the Lavaux account for some 90 hectares and agriculture and livestock on the plateaus is an important factor in the employment structure of the population. 22% of the workforce are currently employed in agriculture, 6% in secondary industry, and the service sector accounts for 72%. 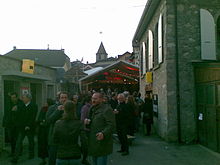 The area west of the village has evolved in recent decades, a small commercial and industrial area in which businesses in the construction industry and information technology have grown up. The trade of Cully geared towards convenience goods and tourism and there are many wine shops. East of the village there is a small leisure port and a campground. Every year, the Cully Jazz Festival is held.[15] Thanks to good transport links and an attractive location, the village has in recent decades developed into a residential community. Many workers though are commuters who work mainly in Lausanne and in the Vevey-Montreux region.

The community is well developed. It lies on the main road to Lausanne along Lake Geneva to Vevey (with a local bypass). The nearest motorway connections, buily in 1974 is the A9 (Lausanne-Sion), which crosses Belmont (west) and Chexbres (east), each about 6 km (4 mi) from Cully.

On 2 April 1861 a railway station was built in Cully on the Lausanne-Villeneuve section of the railway line from Lausanne to Valais. This station is now part of the Léman RER commuter train network. Cully also provides a bus service which serves the route from Cully via Chexbres to the station Puidoux-Chexbres. Furthermore, Cully is also connected by boating on Lake Geneva.

Cully has a historic center with narrow streets and picturesque winegrowers' houses dating from the 16th to 19th century. Of the former ramparts little more remains to be seen, the three former city gates were demolished.

The Gothic church of Saint-Étienne was built in 1865-66 on the site of a medieval church. The Maison Jaune, built in 1641 is the Town Hall, and the Bâtiment de Villette (dating back to the 16th century) are listed buildings. Other important buildings are the Bâtiment Vallon (1673) and the Hôtel du Raisin, which was built in 1574 and remodeled in 1630 and formerly served as city hall. There is also a fountain and statue. The lakeside promenade and the port facilities are popular recreational and pedestrian zones. A scenic panorama of the Lake Geneva area, the Alps and the Jura is offered from the lookout tower on the Tour de Gourze from 925 m high on Mont de Gourze.

As of 2000[update], there were 139 students in Cully who came from another municipality, while 136 residents attended schools outside the municipality.[17]