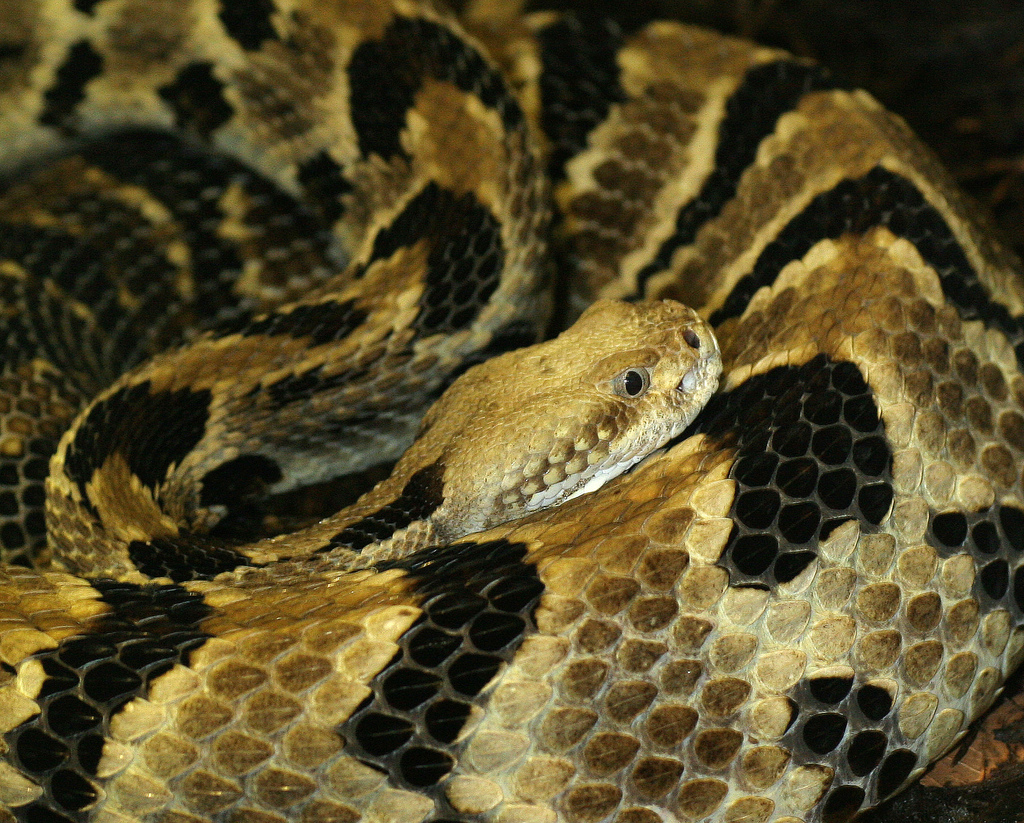 These snakes range in size from the diminutive hump-nosed viper, "", that grows to an average only 30-45 cm, to the bushmaster, ""; a species that is known to reach a maximum of 3.65 m in length -- the longest viperid in the world.

What makes this group unique is that they all share a common characteristic: a deep pit, or fossa, in the loreal area between the eye and the nostril on either side of the head. These s are the external openings to a pair of extremely sensitive infrared detecting organs, which in effect give the snakes a sixth sense that helps them to find and perhaps even judge the size of the small warm-blooded prey on which they feed.

The pit organ is complex in structure and is similar to, but much more highly evolved than the thermoreceptive labial pits found in boas and pythons. It is deep and located in a maxillary cavity. The membrane is like an eardrum that divides the pit into two sections of unequal size, with the larger of the two facing forwards and exposed to the environment. The two sections are connected via a narrow tube, or duct, that can be opened or closed by a group of surrounding muscles. By controlling this tube the snake can balance the air pressure on either side of the membrane. The membrane has many nerve endings packed with . Succinic dehydrogenase, lactic dehydrogenase, , , generalized s and have also been found in it. When prey comes into range, infrared radiation falling onto the membrane allows the snake to determine its direction. Having one of these organs on either side of the head produces a stereo effect that indicates distance as well as direction. Experiments have shown that, when deprived of their senses of sight and smell, these snakes can strike accurately at moving objects that are less than 0.2°C warmer than the background.

Among vipers, these snakes are also unique in that they have a specialized muscle, called the "muscularis pterigoidius glandulae", between the venom gland the head of the ectopterygoid. Contraction of this muscle, together with that of the "m. compressor glandulae", forces venom out of the gland.

This family of snakes is found in the from eastern eastward through to , , , peninsular and . In the , they range from southern southward through and to southern .

This is a versatile group, with members found in habitats ranging from parched (e.g., the sidewinder, "") to s (e.g., the bushmaster, ""). They may be either or terrestrial, and one species is even semi-aquatic: the cottonmouth, "". The altitude record is held jointly by "" in and "" in , both of which have been found above the treeline at over 4,000 m elevation.

Although a few species are highly active by day, such as "", a bright green pit viper endemic to , most are nocturnal, preferring to avoid scorching daytime temperatures and to hunt when their favored prey are also active. The snakes' heat-sensitive pits are also thought to aid in locating cooler areas in which to rest.

As ambush predators, crotalines will typically wait patiently somewhere for unsuspecting prey to wander by. At least one species, the arboreal "" of , is known to select a specific ambush site and return to it every year in time for the spring migration of birds. Studies have indicated that these snakes learn to improve their strike accuracy over time.

Many temperate species (e.g. most rattlesnakes) will congregate in sheltered areas or "dens" to overwinter (see ""), the snakes benefitting from the combined heat. In cool temperatures and while pregnant vipers also bask on sunny ledges. Some species do not mass together in this way, for example the copperhead, "", or the Mojave rattlesnake, "".

Like most snakes, crotalines keep to themselves and will strike only if cornered or threatened. Smaller snakes are less likely to stand their ground than are larger specimens. Pollution and the destruction of rainforests has caused many viper populations to decline. Humans also threaten vipers, as many vipers are hunted for their skins or killed by cars when they wander onto roads.

With few exceptions, crotalines are ovoviviparous; that is, females give birth to live young. Among the (egg-laying) pit vipers are "Lachesis", "", and some "" species. It is believed that all egg-laying crotalines guard their eggs.

Brood sizes range from two for very small species, to as many as 86 for the fer-de-lance, "": a species among the most prolific of all live-bearing snakes. Many young crotalines have brightly coloured tails that contrast dramatically with the rest of their bodies. Used in a behavior known as caudal luring, the young snakes make worm-like movements with their tails to lure unsuspecting prey within striking distance.

"*) Not including the nominate subspecies."
T) .

In the past, the pit vipers were usually classed as a separate family: the "Crotalidae". Today, however, the of the viperines and the crotalines as a whole is undisputed, which is why they are treated here as a subfamily of the "".