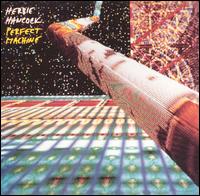 
"Perfect Machine" is the thirty-seventh by , and the last with the Rockit Band.

The last of the three Rockit band albums, "Perfect Machine" was also the last album at for .

Winning his second award for Best R&B Performance for the album "Sound-System", then winning his in 1986 for his original score to the starred movie Round Midnight (in which he also acted in), "Perfect Machine" was the least popular of the three Rockit band albums.

The title track for instance, was Hancock going into a world electronic for the first time, even using the (which he also used on "Future Shock"). Plus, trying to recapture the magic from his 1965 hit "Maiden Voyage", he turned the song electric for the first time on a record.

All songs by Hancock/Laswell/Collins/Bonner, except where noted.

*Tracks marked with an asterisk(*) available only on the CD re-issue.