Amblyopia, also known as lazy eye,[1] is a disorder of the visual system that is characterized by a vision deficiency in an eye that is otherwise physically normal, or out of proportion to associated structural abnormalities of the eye. It has been estimated to affect 1–5% of the population.[2]

Amblyopia means that visual stimulation either fails to transmit or is poorly transmitted through the optic nerve to the brain for a continuous period of time. It can also occur when the brain "turns off" the visual processing of one eye, to prevent double-vision, for example in strabismus (crossed-eyes). It often occurs during early childhood, resulting in poor or blurry vision. Amblyopia normally affects only one eye in most patients. However, it is possible, though rare, to be amblyopic in both eyes, if both fail to receive clear visual images. Detecting the condition in early childhood increases the chance of successful treatment, especially if detected before the age of five. The earlier it is detected, and the underlying cause corrected with spectacles and/or surgery, the more successful the treatment in equalizing vision between the two eyes.

The colloquialism "lazy eye" is frequently used to refer to amblyopia. The term "lazy eye" is imprecise because it is a layman's term for strabismus, particularly exotropia.[3]

Amblyopia is a developmental problem in the brain, not any intrinsic, organic neurological problem in the eyeball (although organic problems can lead to amblyopia which can continue to exist after the organic problem has resolved by medical intervention).[4] The part of the brain receiving images from the affected eye is not stimulated properly and does not develop to its full visual potential. This has been confirmed by direct brain examination. David H. Hubel and Torsten Wiesel won the Nobel Prize in Physiology or Medicine in 1981 for their work in showing the irreversible damage to ocular dominance columns produced in kittens by sufficient visual deprivation during the so-called "critical period." The maximum "critical period" in humans is from birth to two years old.[5]

Many people with amblyopia, especially those who only have a mild form, are not even aware they have the condition until tested at older ages, since the vision in their stronger eye is normal. However, people who have severe amblyopia may experience related visual disorders, most notably poor depth perception. Amblyopes may suffer from poor spatial acuity, low sensitivity to contrast and some "higher-level" deficits to vision such as reduced sensitivity to motion.[6] These deficits are usually specific to the amblyopic eye. Amblyopes also suffer from problems of binocular vision such as limited stereoscopic depth perception and usually have difficulty seeing the three-dimensional images in hidden stereoscopic displays such as autostereograms.[7] However, perception of depth from monocular cues such as size, perspective, and motion parallax remains normal.

Amblyopia can be caused by deprivation of vision early in life by vision-obstructing disorders such as congenital cataracts, by strabismus (misaligned eyes), anisometropia (different degrees of myopia or hypermetropia in each eye), or by a significant amount of astigmatism in one or both eyes. 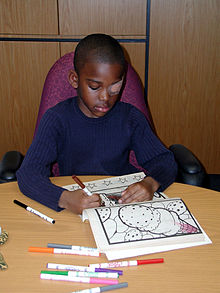 A child wearing an adhesive eyepatch to correct amblyopia

Strabismus, sometimes incorrectly also called lazy eye, is a condition in which the eyes are misaligned.[8] Strabismus usually results in normal vision in the preferred sighting (or "fellow") eye (the eye that the person prefers to use), but may cause abnormal vision in the deviating or strabismic eye due to the difference between the images projecting to the brain from the two eyes.[9] Adult-onset strabismus usually causes double vision (diplopia), since the two eyes are not fixed on the same object. Children's brains, however, are more neuroplastic, and therefore can more easily adapt by suppressing images from one of the eyes, eliminating the double vision. This plastic response of the brain, however, interrupts the brain's normal development, resulting in the amblyopia. Strabismic amblyopia is treated by clarifying the visual image with glasses, and/or encouraging use of the amblyopic eye with an eyepatch over the dominant eye or pharmacologic penalization of the better eye. Penalization usually consists of applying atropine drops to temporarily dilate the pupil, which leads to blurring of vision in the good eye. This helps to prevent the bullying and teasing associated with wearing a patch, although application of the eyedrops is more challenging. The ocular alignment itself may be treated with surgical or non-surgical methods, depending on the type and severity of the strabismus.[10]

Refractive amblyopia may result from anisometropia (unequal refractive error between the two eyes). Anisometropia exists when there is a difference in the refraction between the two eyes. The eye which provides the brain with a clearer image typically becomes the dominant eye. The image in the other eye is blurred, which results in abnormal development of one half of the visual system. Refractive amblyopia is usually less severe than strabismic amblyopia and is commonly missed by primary care physicians because of its less dramatic appearance and lack of obvious physical manifestation, such as with strabismus.[11] Frequently, amblyopia is associated with a combination of anisometropia and strabismus.

Form-deprivation amblyopia (Amblyopia ex anopsia) results when the ocular media become opaque, such as is the case with cataracts or corneal scarring from forceps injuries during birth.[12] These opacities prevent adequate visual input from reaching the eye, and therefore disrupt development. If not treated in a timely fashion, amblyopia may persist even after the cause of the opacity is removed. Sometimes, drooping of the eyelid (ptosis) or some other problem causes the upper eyelid to physically occlude a child's vision, which may cause amblyopia quickly. Occlusion amblyopia may be a complication of a hemangioma that blocks some or all of the eye.

Treatment of strabismic or anisometropic amblyopia consists of correcting the optical deficit (wearing the necessary spectacle prescription) and often forcing use of the amblyopic eye, either by patching the good eye, or by instilling topical atropine in the eye with better vision.[13] Yet, there is a drawback as the drops can have a side-effect of creating nodules in the eye which a correctional ointment can counteract. One should also be wary of over-patching or over-penalizing the good eye when treating for amblyopia, as this can create so-called "reverse amblyopia" in the other eye.[10][14]

Treatment of individuals age 9 through adult is possible through applied perceptual learning.[15][16]

Form deprivation amblyopia is treated by removing the opacity as soon as possible followed by patching or penalizing the good eye to encourage use of the amblyopic eye.[10] The earlier treatment is initiated, the easier and faster the treatment is and the less psychologically damaging.[citation needed] There is also a greater chance of achieving 20/20 vision if treatment is initiated as early as possible.[17]

Although the best outcome is achieved if treatment is started before age 8, research has shown that children older than age 12 and some adults can show improvement in the affected eye. Children from 9 to 11 who wore an eye patch and performed near point activities (vision therapy) were four times as likely to show a two line improvement on a standard 11 line eye chart than amblyopic children who did not receive treatment. Adolescents aged 13 to 17 showed improvement as well, albeit in smaller amounts than younger children. It is uncertain whether such improvements are only temporary, however, particularly if treatment is discontinued.[10][18]

For adults, a 2004 study published in PNAS demonstrated that perceptual learning can be used to improve the vision of amblyopic adults.[19]

Virtual reality computer games where each eye receives different signals of the virtual world that the player's brain must combine in order to successfully play the game have shown some promise in improving both monocularity in the affected eye as well as binocularity.[20][21]

A recent study,[22] widely reported in the popular press,[23] has suggested that repetitive transcranial magnetic stimulation may temporarily improve contrast sensitivity and spatial resolution in the affected eye of amblyopic adults. These results await verification by other researchers.