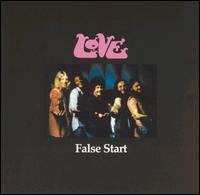 "False Start" is the sixth album by the American rock band Love, released in December 1970.

The second and final Love album for saw bandleader Arthur Lee heavily influenced by his friend, , even going so far as to coax Hendrix into appearing on the opening track of the album, "The Everlasting First", supposedly one of several tracks that Hendrix recorded with Love. No further tracks have surfaced, however, possibly due to copyright restrictions or because the tapes have been lost.

Replacing with and adding second rhythm guitarist after the session with Hendrix brought no great change to the sound of the group. There are shades of blues, funk, country and soul all based in rock and roll.

Success would continue to elude the group who disbanded shortly thereafter. Arthur Lee would issue his debut album, "Vindicator", for in 1972.