Gustav I of Sweden

Gustav I of Sweden 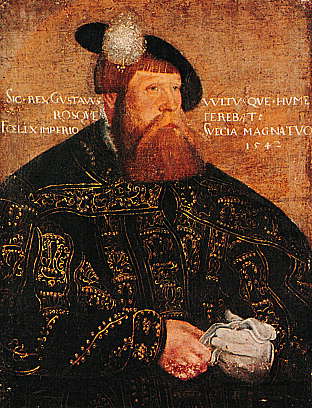 Gustav I, born Gustav Eriksson (Colloquial 15th century ic, "Gösta Jerksson") and later known as Gustav Vasa (12 May 1496 – 29 September 1560), was King of Sweden from 1523 until his death. He was the first monarch of the , an influential noble family which came to be the of Sweden for much of the 16th and 17th centuries. Gustav I was elected in 1521 after leading a rebellion against , the leader of the who controlled most of Sweden at the time.

Gustav was an enigmatic person who has been referred to as both a liberator of the country and as a tyrannical ruler, which has made him the subject of many books. When he came to power in 1523, he was largely unknown, and he became the ruler of a still divided country without a central government. Though not as famous as most of his continental contemporaries, he became the first truly native Swedish sovereign and was a skilled and who laid the foundations for a more efficient centralized government. During his reign was introduced in the country.

In traditional Swedish history he has been labelled the founder of modern Sweden, and the "father of the nation". Gustav liked to compare himself to , whom he believed to have also liberated his people and established a state. As a person, Gustav was known for ruthless methods and a bad temperament, but he also loved music, and had a certain sly wit.Fact|date=February 2008

Gustav Eriksson's (Vasa) mother was and father was (Vasa) who descended from Birgitta Gustafsdotter (Sture), the sister of childless Regent who had died in 1503 when Gustav was a child. According to genealogical research, Birgitta and Sten Sture (and consequently also Gustav Vasa) descended from King , through King Sverker's granddaughter Benedikte Sunesdotter (who was married to Svantepolk Knutsson, son of Duke of Reval). Gustav was born in . The Vasa family belonged to the highest level of hereditary Swedish nobility ("högfrälse") and they possessed some wealth: several manors etc. Like most Swedes at the time, he used no family name and was originally known by his given name and , but the name of the dynasty, derived from the main heraldic charge of the family, has often been given to him by later authors.

Gustav Vasa's father, (Vasa), was involved in the party of fighting against the Danes in the early 16th century. When the Danes, under Christian II, conquered Sweden and took the capital Stockholm in 1520 several members of the Sture party were executed in the in October that year, among whom was Erik Johansson. The young Gustav survived by hiding.

He got involved in some of the revolts against the Danish king. At the battle of on 2 October 1518, he was among those captured and taken prisoner. He was held in but managed to escape, returning by ship to on the southeastern side of Sweden on 31 May 1520. From there, he travelled all the way up to the province of , in what was then northwestern Sweden. He tried to gather troops to take down the Danish government, but had little success initially.

According to popular history, as depicted in 19th century Swedish schoolbooks, Gustav encountered many adventures while he was fleeing around Dalarna. Their historical validity is questioned, however.In 1521 he had managed to gather a small army in Dalarna and become its leader. He also received help by troops from , Germany. By August 1521, the men of Dalarna had elected him regent of Sweden, where after two years of war followed, whereby the Danish troops were gradually defeated.

Gustav was elected king on 6 June 1523, at the in . This date has later been celebrated as the Swedish national holiday. (Gustav was later crowned in on 21 January 1528.) His troops had besieged the capital, and on 24 June, they finally could march into Stockholm. The country was however in no way united in support of the king at that time.

After Gustav seized power, the previous Archbishop, , who at the time held the post of a sort of chancellor, was exiled from the country. Gustav sent a message to the Pope requesting the acceptance of a new archbishop selected by Gustav himself: .

The Pope sent back his decision demanding that unlawful expulsion of Archbishop Gustav Trolle be rescinded, and that the archbishop be reinstated. Here Sweden's remote geographical location proved to have a marked impact — for the former Archbishop had been allied with the Danish king, or at least was considered to have been so allied in contemporary Stockholm, and to reinstate him would be close to impossible for Gustav.

The king let the Pope know the impossibility of the request, and the possible results if the Pope persisted, but — for better or worse — the Pope did persist, and refused to accept the king's suggestions of archbishops. At the time, incidentally and for different reasons, there were also four other unoccupied bishop's seats, where the king made suggestions to the Pope about candidates, but the Pope only accepted one of the candidates. Because the Pope refused to budge on the issue of Gustav Trolle, the king, influenced by Lutheran scholar , in 1531 took it upon himself to appoint yet another archbishop, namely the brother of Olaus, . With this royal act, the Pope lost any influence over the Swedish Church.

In the 1520s, the Petri brothers led a campaign for the introduction of . The decade saw many events which can be seen as gradual introductions of , for instance the marriage of Olaus Petri — a consecrated priest — and several texts published by him, advocating Lutheran dogmas. A translation of the had also been published in 1526. After the reformation, a full translation was published in 1540-41, called the . However, knowledge of Greek and Hebrew among Swedish clergymen was not sufficient for a translation from the original sources; instead the work followed the German translation by in 1534.

Gustav encountered resistance from some areas of the country. People from rebelled three times in the first ten years of Gustav's reign, as they considered the king to have been too harsh on everyone he perceived as a supporter of the Danish, and as they resented his introduction of Protestantism. Many of those who had helped Gustav in his war against the Danes became involved in these rebellions and paid for this, several of them with their lives.

People in rebelled in 1542, and initially gave Gustav severe difficulties in the dense forests. The king sent a letter to the people of Dalarna, requesting that they should send out letters to every Swedish province, stating that Dalarna would support the king with troops, and urging every other province to do the same. Gustav got his troops, with whose help he managed to defeat the rebels next spring.

The leader of the rebels, , has traditionally been seen as a to Sweden. Historical records state that Nils was seriously wounded during a battle, taking bullet wounds to both legs; if this is true, his survival may have been surprising in view of contemporary medical techniques. Nils was executed by quartering; [Dackeland/Gustav Vasa - Landsfader eller tyrann? by Lars-Olof Larsson] it is said that his body parts were displayed throughout Sweden as a warning to other would-be rebels. Modern Swedish scholarship has toned down criticism of Nils Dacke, sometimes making him into a hero in the vein of , particularly in Småland.

Difficulties with the continuation of the Church also troubled Gustav Vasa. The 1540s saw him imposing death sentences upon both the Petri brothers, as well as his former chancellor . All of them were however granted amnesty, after spending several months in jail. In 1554–1557, he waged an inconclusive war against of .

End of his reign

In the late 1550s, Gustav's health declined. When his grave was opened in 1945, an examination of his corpse revealed that he had suffered chronic infections of a leg and in his jaw.

He gave a so-called "last speech" in 1560 to the chancellors, his children and other noblemen, whereby he encouraged them to remain united. On 29 September 1560, Gustav died and was buried (together with two of his wives) in the Cathedral of Uppsala.

Gustav's heritage has been disputed. In 19th century Swedish history a folklore developed wherein Gustav was supposed to have had all kinds of adventures when he liberated Sweden from the Danes. The memory of Gustav has been honored greatly, resulting in embroidered history books, s, and the annual ski event (the largest ski event in the world with 15,000 participants). The city of in was named after the royal house of Vasa in 1606. Gustav is currently portrayed on the 1000 kronor note.Today most of these stories are considered to have no other foundation than legend and skilful propaganda by Gustav himself during his time.

An example of one of his better known adventures among the Swedish people. While Gustav was in exile from the Danish, he was staying over at a farm owned by a close friend for a day's rest. As he was warming himself in the common room, the Danish soldiers got a tip from one of the farm hands that Gustav was in his landlord's farm house. The Danish soldiers burst into the farm house and began searching for someone that would fit Gustav's description in the common room. As one of the soldiers came close to check Gustav Vasa, all of a sudden the landlady took out a bakery spade and started to hit Gustav and scolded him as a "lazy farmboy" and ordered him to go out and work. The Danish soldier found it amusing and didn't realise this "lazy farmboy" was in fact Gustav Vasa himself who managed to slip away from danger and escaped death. There are many other stories about Gustav's close encounters with death, however it is questionable if any of his adventures really did happen or were dramatised by Gustav himself; regardless of whether they happened or not, his adventures are still told to this day in Sweden.

Gustav has been regarded by some as a power-hungry man who wished to control everything: the Church, the economy, the army and all foreign affairs. But in doing this, he also did manage to unite Sweden, a country that previously had no standardized language, and where individual provinces held a strong regional power. He also laid the foundation for Sweden's professional army that was to make Sweden into a regional superpower in the 17th century.

In 1739, English playwright wrote the play "Gustavus Vasa", dealing with the liberation of Sweden from Danish rule. However, , British Prime Minister at the time, believed that the play's villain was intended to represent him, and had the play banned - the first English play to be so banned under the .

Later in the 18th Century, the name "Gustavus Vasa" was given to , a prominent African ex-slave living in Britain and involved in the struggle to abolish .

Gustav Vasa had a series of paintings made during his reign. The originals are lost but reproductions of unknown date remain. These paintings show Gustav's triumphs, showing what Gustav himself considered important to depict.

Persondata
NAME=Gustav I
ALTERNATIVE NAMES=Vasa, Gustav or Eriksson, Gustav (birth name)
SHORT DESCRIPTION=King of Sweden
DATE OF BIRTH=12 May 1496
PLACE OF BIRTH=, or ,
DATE OF DEATH=29 September 1560
PLACE OF DEATH=,