Unlike many racing games, which restrict the player to a race track, Midtown Madness offers an open world recreation of Chicago. This setting was developed by Microsoft and described as offering "an unprecedented degree of freedom to drive around in a virtual city".[2] Players can explore the city via one of several modes, and can determine the weather and traffic conditions for each race. The game supports multiplayer races over a local area network or the Internet. Overall, the game received positive reviews from gaming websites;[3][4] reviewers generally praised the gameplay, though some criticized the graphics.

Midtown Madness features four single-player modes: Blitz, Circuit, Checkpoint, and Cruise. In Blitz, the player must reach a destination within a time limit; in Circuit, the player races other vehicles; in Checkpoint, the game adds the complication of other traffic, such as police cars and pedestrians; and in Cruise, the player simply explores the city. Players have a choice of up to ten vehicles, although only five are available at the start. To unlock the other cars, players must achieve goals such as winning a certain number of races.[1][5] Before a race, if the player has previously won the race, they can change the race duration or the weather, which can affect vehicle performance. Checkpoint mode allows players to set the frequency of traffic, police cars, and pedestrians.[6][7]

The city is modeled after Chicago, including many of its landmarks, such as The 'L', Willis Tower, Wrigley Field, and Soldier Field.[8] Its streets feature many objects that the player can crash into, such as trash bins, parking meters, mailboxes, and street lights.[8] In Checkpoint, traffic is regulated by traffic lights, but the player is under no obligation to obey them.

Midtown Madness supports multiplayer games via local area network, Internet, or serial cable connection. Multiplayer mode was originally supported by Microsoft's MSN Gaming Zone, though this service was retired on June 19, 2006.[9] It is now supported by similar services such as GameSpy Arcade and XFire, via DirectPlay.[10] Multiplayer includes a Cops and Robbers mode, inspired by the television program World's Deadliest Police Chases. This is a capture the flag-style game in which players form two teams; each team must steal the opposing team's cache of gold and return it to their own hideout.[11]

Midtown Madness was one of the first games that Angel Studios (now Rockstar San Diego, part of Rockstar Games) developed for the PC.[2] Microsoft was following up on their previous Madness computer games, Motocross Madness and Monster Truck Madness. According to project director Clint Keith, the idea behind the game came to two Microsoft employees while they were "trying to cross a busy Paris street".[11] They proposed their idea to Angel Studios, who were attempting to sell Microsoft a 3D vehicle simulator. Angel Studios were initially hesitant to accept Microsoft's offer, as it "seemed too large a challenge to pull off".[11] After agreeing, Angel Studios chose Chicago for the setting because it is the site of several famous car chases, such as those in the film The Blues Brothers. To ensure that the city was recreated faithfully, Angel Studios had Chicago residents playtest the game. PC Gamer reported a consensus that the recreation was mostly accurate, though Angel Studios had relocated landmarks to enhance the gameplay.[11]

Angel Studios and Microsoft included ordinary cars in addition to the "overpowered Italian sports cars" often seen in racing games.[12] The developers had to obtain permission from manufacturers to use the likenesses of the vehicles; Microsoft thus received permission from Volkswagen for the New Beetle and from Ford for the Mustang and F-350.[11][12] The decision to make only half the cars available at the outset was to promote a "spirit of competitiveness".[13] Microsoft also told Angel Studios not to allow players to hit pedestrians. After deciding against rendering pedestrians in two dimensions, Angel Studios developed 3D pedestrian models that could run and jump out of the way. Angel Studios included an option to remove pedestrians, as they do not alter gameplay but may significantly affect system performance when in a group; consequently, the game does not require a 3D graphics card.[11]

A demo version was released for download on May 1, 1999.[14][15] It featured three vehicles (a Mustang, Panoz Roadster, and bus), and all four driving modes.[16] The demo also included features that would be scrapped in the full version, such as the ability to send billboards flying.[17] In December 1999, Angel Studios reported that they were considering a map designer for players, but such customization never materialized.[13] The finished game was released on May 27, 1999.[18][19]

The game is distinctly different from other racing games—IGN noted the difference from the Need for Speed series—because of what Microsoft called "an unprecedented degree of freedom to drive around in a virtual city."[2] Clint Keith said the idea behind an "open space" game was to make the gameplay more diverse, and to add an "element of discovery", such as the shortcuts players can take to reach the finish line first.[2] Gary Whitta described the game as open racing: "you still have checkpoints to hit [but] you don't have to follow the A-B-C-D standard to do it".[11]

Reviews of the game were generally positive. IGN rated the game's appearance highly, noting that overall "the downtown portion of Chicago is portrayed very accurately", though generic-looking portions of the city were criticized.[23] Next Generation Magazine said the graphics were impressive, it praised the "thoroughly detailed" random occurrences of "cars hurtling in front of you" and "cringing pedestrians when you lurch onto the sidewalks".[26] GameSpot approved of the variety in third-person, first-person dashboard, and widescreen driving views. However, it complained of the game suffering from "choppy frame rates" and unconvincing visual effects.[22] PC Zone praised Angel Studios for avoiding gimmicks, instead presenting "accurately modelled cars and a meticulously recreated city" to the player.[24] Allgame said Midtown Madness "possesses superb, immersive graphics", using the different times of day and weather as an example. However, it complained that cars not controlled by the player were lacking in details.[20] Computer and Video Games said that as well as being "structurally and visually consistent", the Chicago setting in Midtown Madness was "brought to life"—for instance, a "city bus legitimately pulling out at a four-way junction" can end the race for a player by destroying their car.[7] However, Total Video Games called the game's presentation "far from optimal" even at the recommended system requirements. Reviewer Noel Brady pointed out "a serious lack of detail" and blockiness, especially without a graphics card.[25] 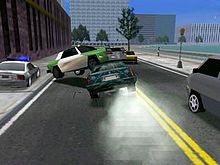 A heavily damaged Cadillac Eldorado hitting oncoming traffic while being pursued by a police car. Moments like this earned the game praise for making it "fun to be able to drive like a maniac [...] because you know you can't in real life."[22]

IGN described the in-game narration as "a nice touch", but noted some glitches among the otherwise "distinctive engine and horn sounds".[23] GameSpot called the game's sounds exceptional, approving of its variety of car noises such as the "warning beeps when the bus goes in reverse".[22] PC Zone praised the in-game radio system, and the support for external media players.[24] Allgame said players "get a dose of reality" with other drivers and pedestrians "hurling insults and exclamations your way".[20] Total Video Games was critical of the AI, declaring that cars often drive "without noticing [the player] at all".[25] In his book AI Game Engine Programming, Brian Schwab described Midtown Madness' gameplay as "arcade style" and "fast and loose", and said the in-game traffic was great.[27]

Reviews of Midtown Madness attributed the most praise to its gameplay for "fun" elements. IGN wrote that the game "doesn't rely heavily on driving authenticity; this game's all about fun." The review also praised the simplicity whereby players can "pick a real-world car and go".[23] GameSpot wrote that "it's fun to be able to drive like a maniac [...] because you know you can't in real life."[22] Computer and Video Games remarked on the game's humor, provided by other drivers, police, contenders (described as maniacs), and the "carnage that unfolds before your windscreen".[7] PC Zone recommended the game, calling it highly refreshing; Total Video Games said the game seemed a good choice, but suggested that it would be outdone by GT Interactive's Driver, released soon after.[25] Allgame called it a "must-buy for the driving game enthusiast", and argued that it would appeal to those not otherwise fans of the genre.[20] Next Generation Magazine concluded its review by stating that Midtown Madness was not groundbreaking, but that "it'll stay on your hard drive for a while and keep you playing".[26]