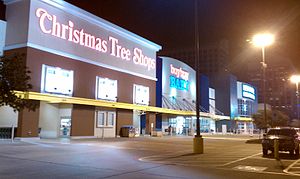 A Christmas Tree Shops in Dallas, Texas, with buybuy Baby, and Bed Bath & Beyond, in a former Home Depot Expo building, opened in 2010.

Christmas Tree Shops are a retail chain that started in Yarmouth Port, Massachusetts on Cape Cod in 1970 as a complex of three small stores; the Front Shop, the Back Shop, and the Barn Shop. The multiple store location, which was located on Route 6A, explains why the name is Christmas Tree Shops instead of Christmas Tree Shop. The chain's founders were Doreen and Chuck Bilezikian. Since the 1980s, the chain has slowly been expanding beyond Cape Cod. As of May 2011 the company has stores in eighteen states (including all six New England states), which have made it a multi-million dollar corporation, with large super-stores.[citation needed] Recent expansion for the chain has included stores in the Midwestern states of Michigan, Indiana, Kentucky, and Ohio. Its newest stores opened in Augusta, Georgia; Dallas, Texas[2]; and Greensboro, North Carolina.

The original stores are seen as a local phenomenon, since it has become a must see destination for many visitors when traveling to Cape Cod. Christmas Tree Shops was acquired by Bed Bath and Beyond in 2003, though the Bilezikians remain involved in the chain's executive operations. The original stores on Route 6A were closed January 2007. It marked the end of an era for many local residents.[citation needed] Some of the earlier Cape Cod locations, such as the store in West Dennis, are far smaller in size than more recently-built stores.

The company maintains distribution centers in Middleboro, Mass., and Florence, N.J., the latter of which opened in 2008. Prior to being moved to Middleboro, distribution was done from the former Cape Cod Coliseum, in South Yarmouth. The Middleboro location also serves as the chain's new headquarters.

The Christmas Tree Shops store at the base of the Sagamore Bridge in Sagamore, Massachusetts.

Christmas Tree Shops are bargain stores, selling everything from food to toys to household furnishings to, of course, Christmas decorations. Most stores are typically made to resemble older buildings, in Colonial, Victorian, or even Old English barn styles (such as the Sagamore, Mass., Pembroke, Mass. and Warwick, R.I. stores). Some, such as the Lynnfield, Mass. store, are even more conceptualized; that store is known for its lighthouse and fishing village motif.

Christmas Tree Shops also has several stores in enclosed shopping malls, such as the Holyoke, Mass. location, which is inside the Holyoke Mall at Ingleside.