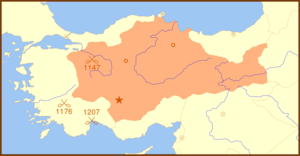 image_map_caption = The Sultanate in 1190, before the
capital =

The Sultanate of Rûm was the Seljuk Turkish that ruled in in direct lineage from 1077 to 1307, with capitals first at and then at . Since the sultans of Rum were highly mobile, cities like and also functioned at times as capitals. At its height the sultanate stretched across central from the - shoreline on the Mediterranean coast to the territory of Sinop on the . In the east, the sultanate absorbed other Turkish states and reached to . Its westernmost limit was near and the gates of the Aegean basin.

The term "" comes from the Arabic word for Rome. The Seljuks called the lands of their sultanate "Rum" because it had been established on territory long considered Roman by Muslim armies. [Alexander Kazhdan, “Rūm” "The Oxford Dictionary of Byzantium" (Oxford University Press, 1991), vol. 3, p. 1816.] Contemporary Turkish historians prefer the term "Anatolian Seljuk Sultanate" ("Anadolu Selçukluları") or, more recently, "Seljuks of Turkey" ("Türkiye Selçukluları"). The state is occasionally called the Sultanate of Konya or Sultanate of Iconium in older western sources.

The sultanate prospered, particularly during the late 12th and early 13th centuries when it won from the Byzantines key ports on Anatolia's Mediterranean and Black Sea coasts. Within Anatolia the Seljuks fostered trade through a program of -building, which facilitated the flow of goods from and to the ports. Especially strong trade ties with the Genoese formed during this period. The increased wealth allowed the sultanate to absorb other Turkish states that had been established in eastern Anatolia after the : the , the , the , and the . Seljuk sultans successfully bore the brunt of the but in 1243 succumbed to the advancing Mongols. The Seljuks became vassals of the Mongols, and despite the efforts of shrewd administrators to preserve the state's integrity, the power of the sultanate disintegrated during the second half of the 13th century and had disappeared completely by the first decade of the 14th.

In its final decades, the territory of the Seljuk Sultanate of Rûm saw the emergence of a number of small principalities or beyliks, among which that of the , known later as the Ottomans, rose to dominance.

In the 1070s, the Seljuk commander Suleyman bin Kutalmish, a distant cousin of Malik Shah and a former contender for the throne of the Great Seljuk Empire, came to power in western . In 1075, he captured the Byzantine cities of Nicaea (İznik) and Nicomedia (İzmit). Two years later he declared himself sultan of an independent Seljuk state and established his capital at .

Suleyman was killed in in 1086 by , the Seljuk ruler of , and Suleyman's son was imprisoned. When Malik Shah died in 1092, Kilij Arslan was released and immediately established himself in his father's territories. He was eventually defeated by soldiers of the and driven back into south-central Anatolia, where he set up his state with capital in . In 1107, he ventured east and captured but died the same year fighting Malik Shah’s son Mehmed Tapar.

Meanwhile, another Rum Seljuk, (not to be confused with the Great Seljuk sultan of the same name), captured Konya. In 1116 Kilij Arslan's son, took the city with the help of the . Upon Mesud's death in 1156, the sultanate controlled nearly all of central Anatolia. Mesud's son, , captured the remaining territories around and from the last of the Danishmends. At the in 1176, Kilij Arslan also defeated a Byzantine army led by , dealing a major blow to Byzantine power in the region. Despite a temporary occupation of Konya in 1190 by German forces of the , the sultanate was quick to recover and consolidate its power.After the death of the last sultan of Great Seljuk, , in 1194, the Seljuks of Rum became the sole ruling representatives of the dynasty. seized Konya from the Crusaders in 1205. Under his rule and those of his two successors, and , Seljuk power in Anatolia reached its apogee. Kaykhusraw's most important achievement was the capture of the harbour of Attalia (Antalya) on the Mediterranean coast in 1207. His son Kaykaus captured and made the his vassal in 1214. He also subjugated Cilician Armenia but in 1218 was forced to surrender the city of acquired from . Kayqubad continued to acquire lands along the Mediterranean coast from 1221 to 1225. In the 1220s, he sent an expeditionary force across the to [A.C.S. Peacock, "The Saljūq Campaign against the Crimea and the Expansionist Policy of the Early Reign of 'Alā' al-Dīn Kayqubād" "Journal of the Royal Asiatic Society", Vol. 16 (2006), pp. 133-149.] . In the east he defeated the s and began to pressure on the .

(1237–1246) began his reign by capturing the region around , but in 1239 he had to face an uprising led by a popular preacher named . After three years, when he had finally quelled the revolt, the Crimean foothold was lost and the state and the sultanate's army had weakened. It is in these conditions that he had to face a far more dangerous threat, that of the expanding . Mongol forces took in 1242 and in 1243, the sultan was crushed by Bayju in the (a mountain between the cities of and ) and the Seljuks henceforth began to owe allegiance to the Mongols and gradually became their vassals. The sultan himself had fled to Antalya after the 1243 battle, where he died in 1246, his death starting a period of tripartite, and then dual rule that lasted until 1260.

The Seljuk realm was divided among Kaykhusraw's three sons. The eldest, (1246–1260), assumed the rule in the area west of the river . His younger brothers, (1248–1265) and (1249–1257) were set to rule the regions east of the river under Mongol administration. In October 1256, Bayju defeated Kaykaus II near and all of Anatolia became officially subject to . In 1260 Kaykaus II fled from Konya to Crimea where he died in 1279. Kilij Arslan IV was executed in 1265 and (1265–1284) became the nominal ruler of all of Anatolia, with the tangible power exercised either by the Mongols or the sultan's influential regents.

The Seljuk state had started to split into small s (s) that increasingly distanced themselves from both Mongol and Seljuk control. In 1277, responding to a call from Anatolia, the sultan raided Anatolia and defeated the Mongols, temporarily replacing them as the administrator of the Seljuk realm. But since the native forces who had called him to Anatolia did not manifest themselves for the defense of the land, he had to return to his homebase in , and the Mongol administration was re-assumed, officially and severely.

Towards the end of his reign, Kaykhusraw III could claim direct sovereignty only over lands around Konya. Some of the s (including the Ottomans in their very beginnings) and Seljuk governors of Anatolia continued to recognize, albeit nominally, the supremacy of the sultan in Konya, delivering the in the name of the sultans in Konya in recognition of their sovereignty, and the sultans continued to call themselves Fahreddin, "the Pride of Islam". When Kaykhusraw III was executed in 1284, the Seljuk dynasty suffered another blow from internal struggles which lasted until 1303 when the son of Kaykaus II, , established himself as sultan in . He was murdered in 1307 as well as his son soon afterwards. A distant relative to the Seljuk dynasty momentarily installed himself as emir of Konya, but he was defeated and his lands conquered by the in 1328. The sultanate's monetary sphere of influence lasted slightly longer and coins of Seljuk mint, generally considered to be of reliable value, continued to be used throughout the 14th century, once again, including by the Ottomans.

The exceptional period that flourished in Anatolia in the 12th and the 13th centuries, between the Crusades and the Mongol invasion, is marked by outstanding works of architecture and decorative arts.

Among these, the s (or "hans"), used as stops, trading posts and defense for caravans, and of which about a hundred structures were built during the Anatolian Seljuks period, are particularly remarkable. Their unequalled concentration in time and in Anatolian geography represent some of the most distinctive and impressive constructions in the entire history of .

The largest caravanserai is the 1229-built on the road between the cities of and , in the township of depending the latter city, enclosing 3,900 square meters. There are two caravanserais that carry the name "Sultan Han", the other one being between and . Furthermore, apart from Sultanhanı, five other towns across Turkey owe their names to caravanserais built there. These are in , , and , as well as the township of / within metropolitan area. The caravanserai of Hekimhan is unique in having, underneath the usual inscription in with information relating to the edifice, two further inscriptions in Armenian and Syriac, since it was constructed by the sultan 's doctor ("hekim") who is thought to have been a by his origins, and to have ed to . There are other particular cases like the settlement in Kalehisar site (contiguous to an ancient Hittite site) near , founded by the Seljuk commander Hüsameddin Temurlu who had taken refuge in the region after the defeat in the , and had founded a township comprising a castle, a medrese, a habitation zone and a caravanserai, which were later abandoned apparently around the 16th century. All but the caravanserai, which remains undiscovered, was explored in the 1960s by the /Ottoman archaeologist , and the finds as well as a number of documents attest to the existence of a vivid settlement in the site, such as a 1463-dated Ottoman firman which instructs the headmaster of the medrese to lodge not in the school but in the caravanserai.

As regards the names of the sultans, there are variants in form and spelling depending on the preferences displayed by one source or the other, either for fidelity in transliterating the Persian-influenced variant of the which the sultans used, or for a rendering corresponding to the modern Turkish phonology and orthography. Some sultans had two names that they chose to use alternatively in reference to their legacy. While the two palaces built by Alaeddin Keykubad I carry the names and , he named his mosque in Konya as Alaeddin Mosque and the port city of he had captured as "". Similarly, the medrese built by in Kayseri, within the complex ("") dedicated to his sister , was named Gıyasiye Medrese, and the one built by in as Izzediye Medrese.