Delilah
This article is about the Biblical figure. For other, see Delilah (disambiguation). 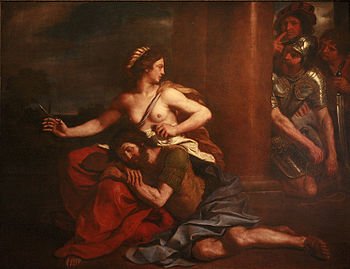 Delilah (דלילה – Dlila, Standard Hebrew meaning "[One who] weakened or uprooted or impoverished" from the root dal meaning "weak or poor")[1] appears only in the Hebrew bible Book of Judges 16, where she is the "woman in the valley of Sorek" whom Samson loved, and who was his downfall. Her figure, one of several dangerous temptresses in the Hebrew bible, has become emblematic: "Samson loved Delilah, she betrayed him, and, what is worse, she did it for money", Madlyn Kahr begins her study of the Delilah motif in European painting.[2]

Delilah was approached by the lords of the Philistines, to discover the secret of Samson's strength, "and we will give thee, every one of us, eleven hundred pieces of silver." Three times she asked Samson for the secret of his strength, and all three times he gave her a false answer. The first time, he told her, "If they bind me with seven green withes that were never dried, then shall I be weak, and be as another man." Then he told her, "If they bind me fast with new ropes that never were occupied, then shall I be weak, and be as another man." The third time, he told her, "If thou weavest the seven locks of my head with the web...."[3] On the fourth occasion, he gave her the true reason: that he did not cut his hair in fulfillment of a vow to God;[4] and Delilah, when Samson was asleep on her knees, called up her man to shave off the seven locks from his head, then betrayed him to his enemies: "The Philistines took him, and put out his eyes, and brought him down to Gaza, and bound him with fetters of brass; and he did grind in the prison house."

The toponym "Sorek" or "soreq" is identified only in connection with the Samson story. In the fourth century AD, Jerome mentions a "Capharsorec" that was near Saraa. Modern Israel has a Soreq Valley and even a Sorek Vineyard (since 1994/5) producing Merlot. Soreq, however, is the grapevine itself in Genesis 49:11, Isaiah 5:2, and Jeremiah 2:21. Samson had been dedicated as a Nazirite, "from the womb to the day of his death"; thus he was forbidden to touch wine or cut his hair.[5]

Petrarch instanced Samson and Delilah in his Trionfi, as a victim in his allegorical depiction of the Triumph of Love. Somewhat inappropriately it would seem to a modern eye, the theme was depicted on more than one fifteenth-century Tuscan painted marriage tray. In the North, the Late Gothic theme of Weibermacht, of the dangerous strength of women, included in the series a conventional scene of a seated Delilah, with Samson asleep in her lap, shearing the "seven locks" from his head: the woodcut by Master E.S. might be a scene of courtly love, Madlyn Kahr has remarked, save for the ominous scissors in Delilah's hand.

A small grisaille panel by Andrea Mantegna[6] in the National Gallery, London places the duo beneath a dead tree wound about with a luxurious vine (the debilitating power of the fruitful woman) and a fountain that overflows and seeps away into the ground, with undertones of unbridled sexual appetite. In Northern Europe the Delilah theme was more prominent among painters like Lucas van Leiden and Maerten van Heemskerck, who made a large woodcut of the subject after Titian. Tintoretto followed Titian in introducing a female accomplice of Delilah's; Rubens added further females, with a suggestion of a brothel, and came back to the subject several times. No major seventeenth-century artist approached the subject more often than Rembrandt.[7]

John Milton personified her as the misguided and foolish but sympathetic temptress, much like his view of Eve, in his 1671 work Samson Agonistes[citation needed]. By the time of Camille Saint-Saëns' Samson et Dalila (1877) Delilah had become the eponym of a "Delilah," a treacherous and cunning femme fatale.

References in film and television