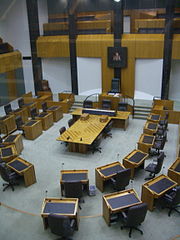 It was created by an act of the Commonwealth Parliament in 1974, replacing the partly elected Legislative Council. Though it was fully elected, its 19 members initially lacked significant powers, as self-government was not granted until 1978. In 1982, the number of members was increased to 25. Each member serves four year terms, and represents a single-member constituency. All members are elected through the preferential system, and as with all other Australian states and territories, voting is compulsory for all those over 18 years of age.

The granting of self-government saw the Assembly assume control of most of the functions of life in the Northern Territory. However, the federal government retained control of certain areas, including Aboriginal land, industrial relations, national parks and uranium mining. The federal government also retained the power to override legislation passed by the Assembly. Though rarely used, this power was most clearly illustrated in the mid-1990s, when the Commonwealth overrode the Rights of the Terminally Ill Act 1995.

As with most Australian states and territories, legislation passed through the Assembly requires royal assent, which is granted by the Administrator of the Northern Territory. Once the Administrator gives assent, the Governor-General of Australia also has the option to reject the bill. However, both of these are largely formalities, as refusal to give assent is practically unheard of.

The party or coalition with the most seats in the Assembly is invited by the Administrator to form government. The leader of that party subsequently becomes the Chief Minister of the Northern Territory, and their senior colleagues become ministers responsible for various portfolios. As Australian political parties traditionally vote along party lines, most legislation introduced by the governing party will pass through the Legislative Assembly.

From the Parliament's inception in 1974 until 2001, it was controlled by the conservative Country Liberal Party, which is affiliated with the federal Liberal-National coalition. However, in 2001, the Australian Labor Party won government for the first time on a one-seat majority, with Clare Martin becoming the Territory's first Labor and first female Chief Minister. The Martin-led ALP won 19 seats to the CLP's 4 in 2005, however Martin resigned in 2007. Paul Henderson became leader of the ALP, and retained government with another one-seat majority in 2008. Labor lost its majority when Marion Scrymgour went to the cross-benches as an independent. She re-joined the party after Alison Anderson left the party to sit as an independent. Anderson joined the CLP in September 2011. The next election is due in 2012.