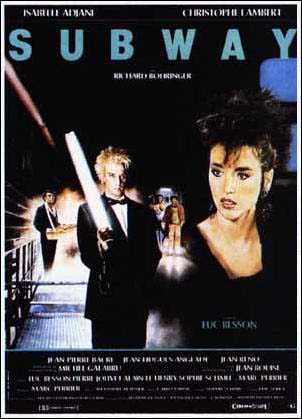 "Subway" is a 1985 French film directed by , starring and and is part of the movement. The film was a reflection of the marginalised "Génération Mitterrand" of the 1980s. [Luc Besson - Susan Hayward] Themes of the film include young people without family connections being monitored and policed by older people, the rejection of capitalist society [Luc Besson - Susan Hayward] and 'high' culture being usurped by . [Contemporary French Cinema - Guy Austin]

Having stolen some compromising documents, a man known as Fred (Lambert) takes refuge in the fascinating underground world of the . While the henchmen of the gangster owner of the documents chase him, Fred develops a relation with his young trophy wife Héléna (Adjani) who is getting increasingly bored with her gilded cage life.

A number of fascinating characters pass by in the storyline, as Fred decides to form a band and perform in the subway. Among the band members are the Drummer (played by Jean Reno) and the Bass Player (Éric Serra), who have since accompanied Besson in the making of most of his movies.

The ending is left open as to what actually happens in the growing love relation between Fred and Helena — and to whether he lives or dies. At a performance with the newly formed band (where Fred has paid off the actual performers at an announced concert with money from a robbery and put his band in their place) he is shot by the henchmen of Héléna's husband before she can reach him to warn him of the approaching danger. The film ends with her kneeling beside him, Fred lying on his back looking content and singing along to the band playing in the background.

The film holds an 86% rating on , based on seven reviews [ [http://www.rottentomatoes.com/m/subway/ "Subway" reviews] , Rotten Tomatoes] . of praised the film's "highly energetic visual style" and "the sheer fun of staging domestic scenes, musical interludes and roller-skate chases in the underground" but added that " [the] characters and situations [are] so thin that they might as well be afterthoughts." [ [http://movies.nytimes.com/mem/movies/review.html?res=9907EEDD1538F935A35752C1A963948260 Review] , Janet Maslin, The New York Times, November 6, 1985]

The scene where Fred holds up a strip of fluorescent tube is a reference to the of . [Contemporary French Cinema - Guy Austin]