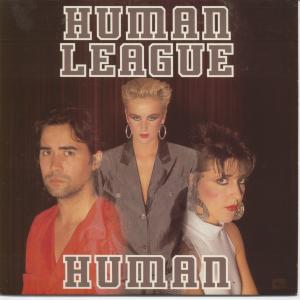 "Human" is a song recorded by British band . It was released as the first single from their 1986 album "Crash". The track was written and produced by US producers .

In 1985 the recording sessions for the Human League's fifth album were not going well; and the band did not like the results which was causing internal conflict.
executives worried by the lack of progress from their, then most profitable signing, suggested the band accept an offer to work with producers Jimmy Jam and Terry Lewis who already had material to work with; and had expressed an interest in the band from their US releases. Jam and Lewis had recently emerged as in-demand talent due to their success with and her "Control" album.

Of the 10 songs on "Crash", Jam and Lewis wrote three, "Human" being one of them. It is a mid-tempo which lyrically is an exchange between a man and a woman in a relationship who have reunited after a short separation. In the first two verses is apologizing to his partner for being unfaithful during her absence, and in the song's breakdown 's spoken-word confession reveals that she too was unfaithful. The song's title is derived from the chorus, in which both parties in the relationship explain that they are "only human" and "born to make mistakes".

"Human" became the second million-selling number-one single for The Human League on the U.S. (after "") and their second chart-topper on the U.S. chart (after ""). Jam and Lewis' R&B-based production was also popular on American urban radio, bringing the Human League into the top ten of the U.S. R&B chart for the first time. In the UK, where R&B was less popular "Human" peaked at number eight in the .

It was a welcome success for the Human League, who were starting to suffer from creative stagnation and a slight decline in fortunes after a hugely successful start to the 1980s.

"Human" was reworked and re-released in 2003 as a remix in the form of "Human (The Chinese Whispers Mix)" principally in Asia.It was the creation of based British Producer Ian Widgery who had recently had major success in the Asian music market with the album "Shanghai Lounge Divas". Widgery took the original, mixed in traditional Chinese instruments and recorded a new chorus in Cantonese by female Chinese vocalist Li Ya which is interwovan with Oakey, Catherall and Sulley's vocals. Oakey's lead vocals are faded to give the music greater impact.The remix was so popular, that it crossed over to the UK and US markets where it received airplay and play on music television stations, during the height of the revival.Although it was not released as a single in either country it appears on some versions of the bands "The Very Best of the Human League" album of 2003. [Discogs: Ian Widgery [http://www.discogs.com/artist/Ian+Widgery] ]

The for "Human" was filmed in London during June 1986, in a studio using overlay. It is heavily stylized to give a 'water reflective' effect and blue hue throughout. In the first time that the band had been presented as a "Phil and the girls" trio, images of Oakey, Catherall and Sulley are constantly layered and blended. The video was conceived and directed by Andy Morahan.

In 2003 a new video was created and released to promote the Chinese Whispers mix. This music video used the original footage of Oakey, Sulley and Catherall from 1986 and interlaced it with traditional Chinese imagery of silhouetted water grass, water lilies and Cantonese characters. It was subject of a US MTV featurette which was introduced by Oakey and featured Ian Widgery talking about the creative process in the reworking of the original Human.