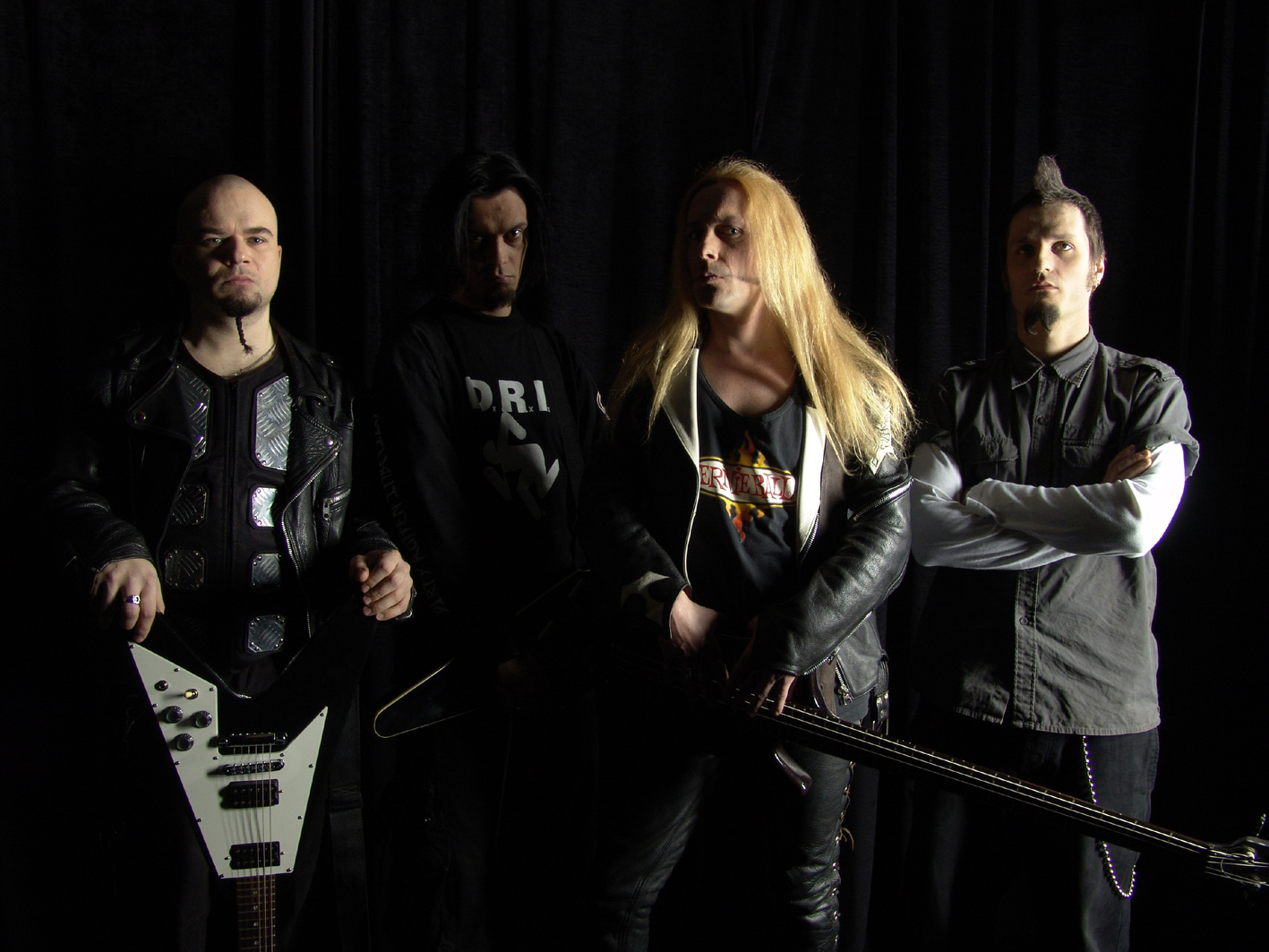 
Acid Drinkers is a Polish heavy metal band, formed in September 1986 in .

Acid Drinkers band was founded on 21 September 1986 at the initiativeof Tomasz "Titus" Pukacki (vocals, bass) and Robert "Litza" Friedrich(guitar, vocals). The lineup soon expanded as Darek "Popcorn" Popowicz(lead guitar) and a drummer Piotr "Chomik" Kulk (shortly after replacedby Maciej "Ślimak" Starosta) joined the band. With this lineup the bandworked on its own compositions; numbers like "Barmy Army", "Del Rocca"or "I Mean Acid" appeared. Within a month of the band's creation Tituswas called up to the army and left his pals for two years. Others, inthe meantime, did not intend to idle their time away: Litza and Popcornundertook a reactivation of the band named Slavoy. Soon both of themreceived a proposal to play for reputable groups: Popcorn from WolfSpider, Litza from Turbo.

After returning from the army, Titus tried to reactivate his firstsquad - Los Desperados. His attempts misfired and Titus himself, aftermeeting with Popcorn, decided to resume existence of Acid Drinkers.Litza and Ślimak joined the band. Their debut took place on 26th August1989 on Wyspa Słodowa in Wrocław. That performance was actually thebeginning of the band's true career. Rumors about a new, excellentmetal group swiftly spread across Poland. Soon afterwards the Acidsreceived an opportunity to record an album and continue walking alongtheir path of glory. With this lineup there emerged theirbest-known classics, including their debut, "Are You A Rebel?", "VileVicious Vision" and their most famous long-play, "Infernal Connection".At the end of 1998, Litza decided to leave the band. Przemysław "Perła"Wejmann, a singing guitarist and a leader of Guess Why, replaced him.With "Perła" on board, Acids recorded three albums "Amazing AtomicActivity", "Broken Head" and "Acidofilia". At the very beginning of2003, Perła made up his mind to leave the squad. It took almost a month before the new guitarist was chosen. The newmember turned out to be a well-known frontman of an already disbandedgroup - Illusion - Tomek "Lipa" Lipnicki. Together with Lipa, the Acidsrecorded a well-received long-play, "Rock Is Not Enough". After over ayear of cooperation, the new guitarist left Acid Drinkers for his ownproject, Lipali. His place in the squad was taken over by Aleksander"Olass" Mendyk from "None". The new member of Acid's crew quicklyintegrated himself into the band, in which he still plays.At present Acid Drinkers play numerous concerts and plan to record anew album.

To date, Acid Drinkers are widely considered the best and mostspectacular thrash-metal band in Poland. Their popularity has gone farbeyond typical metal music sphere. The Acids have played over 500 shows, and many of those will surely stay in minds of thousands of fans – it wouldbe enough to mention Jarocin festivals, Metalmania, Węgorzewo,Przystanek Woodstock or Odjazdy. The Acids performed there as foregroundcelebrities. They preceded performances in Poland by, among others,
, , , ,
Paradise Lost and . Moreover, manyknown polish artists such as: Edyta Bartosiewicz, Kazik Staszewski,Tomek Lipnicki, Patrycja Kosiarkiewicz or Grzegorz Skawiński took partin Acids’ recordings. Acid Drinkers were three times (on 1998, 2000,2004) awarded with a in the hard and heavy category, andreceived in 1998 from TVP 2 the "Złoty bączek" (Golden spinning top) award for being the bestmusic group from Poland. Additionally, they were acknowledged as one ofthe five best polish bands of the 1990s (together with Hey, KazikStaszewski, Edyta Bartosiewicz and O.N.A.) by journalists and readersof Tylko Rock (Only Rock) magazine.