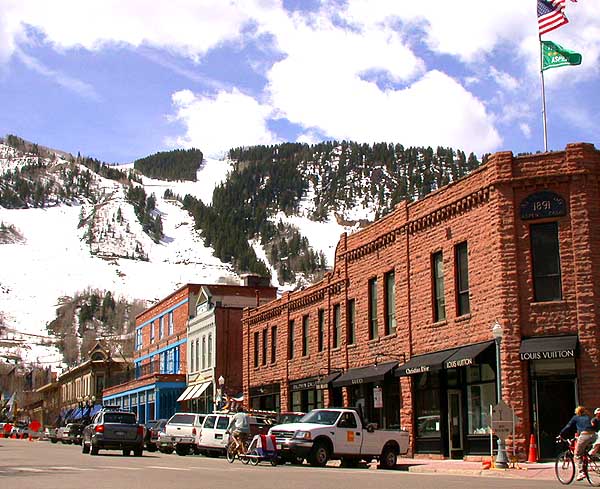 imagesize = 290px
image_caption = View south along Galena Street in downtown Aspen. The Aspen Mountain ski area is in the background. 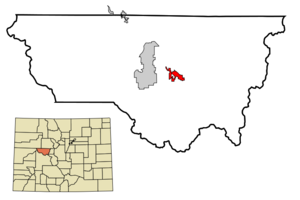 mapsize = 250x200px
map_caption = Location in Pitkin County and the

The City of Aspen is a Home Rule Municipality that is the and the most populous city of Pitkin County, , .GR|6

Its per capita is among the highest in the nation. In the late 20th century the average home price reached approximately $6 million [http://www.bestplaces.net/city/Aspen-Colorado.aspx] and the city developed as an off-beat haven for celebrities, attracting such people as (who wrote several folk songs about the town, including "Aspenglow", and "Starwood in Aspen") and .

This historic character of the city has been challenged in recent decades by skyrocketing property values and the proliferation of second homes, increasingly shutting low- and middle-income workers out of the city and creating a large pool of commuters from nearby bedroom communities such as Basalt and Carbondale. At the same time, in stark contrast to its historic character, the city has emerged into international fame as a glitzy playground of the wealthy and famous. The downtown has been largely transformed into an upscale shopping district that includes high-end restaurants, salons, and boutiques. Aspen boasts a , , , , , , and recently a boutique, 3 of which are the only locations in Colorado. The booming market has forced the city to struggle between permitting growth and restricting it. The city today remains a mix of high-end luxury homes and condos intermixed with legacy residences and parks populated by an old guard of Aspen residents struggling to maintain the unique character of the city. Aspen has become a second and third home to many international jet setters.

The city has its roots in the winter of 1879, when a group of miners ignored pleas by Frederick Pitkin, governor of Colorado, to return across the Continental Divide due to an uprising of the Ute Indians. Originally named Ute City, the small community was renamed Aspen in 1880, and, in its peak production years of 1891 and 1892, surpassed Leadville as the nation's most productive silver-mining district. [Charles W. Henderson, 1926, "Mining in Colorado", U.S. Geological Survey, Professional Paper 138, p.176, 201.] Despite the price of silver steadily declined during the silver boom in Colorado and the frequent Indian attacks,Fact|date = August 2008 production expanded due to the passage of the of 1890, which doubled the government's purchase of silver. By 1893, Aspen had banks, a hospital, two theaters, an opera house and electric lights. Economic collapse came with the , when President Cleveland called a special session of Congress and repealed the act. Within weeks, many of the Aspen mines were closed and thousands of miners were put out of work. It was proposed that silver be recognized as legal tender and the Populist Party adopted that as one of its main issues; , an Aspen newspaperman and agitator was elected governor of Colorado on the Democratic Ticket; but in time the movement failed.

Eventually, after wage cuts, mining revived somewhat, but production declined and by the 1930 census only 705 residents remained. There was a fine stock of old business blocks and residences and excellent snow. Aspen's development as a ski resort first flickered in the 1930s when investors conceived of a ski area, but the project was interrupted by . Friedl Pfeifer, a member of the 10th Mountain Division who had trained in the area, returned to the area and linked up with industrialist Walter Paepcke and his wife Elizabeth. The Aspen Skiing Corporation was founded in 1946 and quickly became a well-known resort, hosting the FIS World Championships in 1950. Paepcke also played an important role in bringing the Goethe Bicentennial Convocation to Aspen in 1949, an event held in a newly designed tent by the architect . Aspen was now on the path to becoming an internationally known ski resort and cultural center, home of the . The area would continue to grow with the development of three additional ski areas, Buttermilk (1958), Aspen Highlands (1958), and Snowmass (1969).

In 1977, Aspen was thoroughly photographed for the project funded by the . The Movie Map is one of the earliest examples of .

Aspen is notable as the smallest radio market tracked by , ranked at #302.

There were 2,903 households out of which 16.5% had children under the age of 18 living with them, 28.8% were married couples living together, 5.6% had a female householder with no husband present, and 62.7% were non-families. 43.8% of all households were made up of individuals and 4.8% had someone living alone who was 65 years of age or older. The average household size was 1.94 and the average family size was 2.67.

* or RFTA, provides bus service in Aspen, and pay service to the surrounding communities of Snowmass Village, Basalt, El Jebel, Carbondale, Glenwood Springs and Rifle. Local RFTA bus service within Aspen and to the Aspen-Pitkin County Airport is free.

*Aspen's only airport is also known as Sardy Field. The airport is an FAA Class 1 airport, and has one asphalt runway, convert|100|ft|m|abbr=on. wide and 7,006 ft long. Its hours of operation with FAA air traffic control is 7am to 10pm MST/MDT. Sardy Field is Colorado's third busiest airport. The airport has a large General Aviation section which can accommodate the many corporate airplanes and private jets which can crowd the airport during the busy holiday seasons. The F.B.O., which operates the General Aviation section, is Atlantic Aviation. The airport also has 4 regular commercial air carriers: United Airlines and Delta Airlines (operated by SkyWest Airlines),US Airways (operated by AmericaWest Airlines), and Frontier Airlines.

*, former Saudi ambassador to the United States has recently listed his convert|56000|sqft|m2|abbr=on Aspen compound for $135,000,000 USD.
* & , maintain residence in Woody Creek
*, snowboarder, Olympic silver medalist.
* has spent her Christmas holiday in Aspen for the last few years.
* maintains a residence near Aspen toward Independence Pass.
*, actor
*, former CEO of Disney
* and have been part-time residents for years.
*, actor
*, painter
*, actor
* has a house in Aspen, and is a frequenter of the city's .
*, former French actress, singer.
*, former ski racer, current Gold Cup Tarpon Champion, grew up in Aspen.
* had a home for years.
*, actor
*, Movie and television icon from the 1950s, 1960s, 1970s, and 1980s.
*, musician has a home in the valley.
*, the founder of The New Yorker, was born in Aspen and visited many times throughout his life to fish.
* lived in Woody Creek, and once ran for Sheriff (his platform included renaming Aspen to "Fat City").
* recently purchased a home in Starwood.
*, author
*, the fastest woman to climb the
*, activist hedge fund manager
*, recorded some of her B'Day Album in Aspen and stayed during.

"Cities listed alphabetically (together with their respective regions/departments)."