Eastern Air Lines Flight 401 was a Lockheed L-1011 Tristar 1 jet that crashed into the Florida Everglades on the night of December 29, 1972, causing 101 fatalities (77 initial crash survivors, two died shortly afterward). The crash was a result of the flight crew's failure to recognize a deactivation of the autopilot during their attempt to troubleshoot a malfunction of the landing gear position indicator system. As a result, the flight gradually lost altitude and eventually crashed, while the flight crew was preoccupied with solving that problem. It was the first crash of a wide-body aircraft and at the time, the deadliest in the United States.[1] 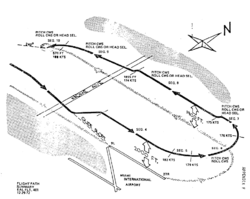 The aircraft flightpath summary, as shown in the NTSB report

A L-1011 similar to the aircraft involved in the accident.

The flight was routine until 11:32 p.m., when the flight began its approach into Miami International Airport. After lowering the gear, first officer Stockstill noticed that the landing gear indicator, a green light identifying that the nose gear is properly locked in the "down" position, did not illuminate.[9]This was discovered to be due to a burned-out light bulb.[10] The landing gear could have been manually lowered either way.[11] The pilots cycled the landing gear but still failed to get the confirmation light.[12]

Loft, who was working the radio during this leg of the flight, told the tower that they would abort their landing and asked for instructions to circle the airport. The tower cleared the flight to pull out of its descent, climb to two thousand feet (610 m), and then fly west over the darkness of the Everglades.[13]

The cockpit crew removed the light assembly[14] and second officer Repo was dispatched into the avionics bay beneath the flight deck to check visually if the gear was down through a small viewing window.[15] Fifty seconds after reaching their assigned altitude, captain Loft instructed first officer Stockstill to put the L-1011 on autopilot.[16] For the next eighty seconds the plane maintained level flight. Then it dropped one hundred feet (30 m), and then again flew level for two more minutes, after which it began a descent so gradual it could not be perceived by the crew.[17] In the next seventy seconds, the plane lost only 250 feet (76 m), but this was enough to trigger the altitude warning C-chord chime located under the engineer's workstation.[18] The engineer had gone below, and there was no indication by the pilot's voices recorded on the CVR that they heard the chime. In another fifty seconds, the plane was at half its assigned altitude.[19]

As Stockstill started another turn, onto 180 degrees, he noticed the discrepancy. The following conversation was recovered from the flight voice recorder later:

Stockstill: We did something to the altitude.
Loft: What?
Stockstill: We're still at 2,000 feet, right?
Loft: Hey — what's happening here?[20]

Robert "Bud" Marquis, an airboat pilot, was out frog gigging with Ray Dickinsin when they witnessed the crash. They rushed in to rescue survivors. Marquis received burns to his face, arms and legs—a result of spilled jet fuel from the crashed Tristar—but continued shuttling people into and out of the crash site that night and the next day. For his efforts, he received the Humanitarian Award from the National Air Disaster Alliance/Foundation and the "Alumitec – Airboat Hero Award", from the American Airboat Search and Rescue Association. In 2007, the Homestead, Florida resident was given an award plaque.[24] He died on November 21, 2008, from complications stemming from injuries he sustained in a fall a month earlier.[25]

In all, 77 had lived through the ordeal — 69 of the 163 passengers and 8 of the 10 flight attendants survived the crash, with 99 initial fatalities.[26] Of the cockpit crew, only Flight Engineer Repo survived the initial crash, along with technical officer Donadeo who was down in the nose electronics bay with Repo at the moment of impact.[27] Stockstill was killed on impact, while Captain Loft died in the wreckage of the flightdeck before he could be transported to a hospital. Repo was evacuated to a hospital, but later succumbed to his injuries.[28] Angelo Donadeo, the lone survivor of the four flightdeck occupants, eventually recovered from his injuries and died on October 4, 2004.[29] The swamp absorbed much of the energy of the crash, lessening the impact on the aircraft. The swamp itself saved many lives as mud blocked many wounds sustained by survivors, preventing them from bleeding to death. However, it also complicated the survivors' recuperation, as organisms in the swamp caused infection, with the potential for gas gangrene. Eight passengers became infected; doctors used hyperbaric chambers to treat the passengers and kill the infections.[1] All of the survivors were injured; 60 received serious injuries and 17 suffered only minor injuries and did not require hospitalization.[30] The most common injuries were fractures of ribs, spines, pelvises, and lower extremities. 14 survivors had various degrees of burns.[31]

Cause of the crash

The NTSB investigation discovered that the autopilot had been inadvertently switched from altitude hold to CWS (Control Wheel Steering) mode in pitch.[32] In this mode once the pilot releases pressure on the yoke the autopilot will maintain the pitch attitude selected by the pilot until he moves the yoke again. Investigators believe the autopilot switched modes when the captain accidentally leaned against the yoke while turning to speak to the flight engineer, who was sitting behind and to the right of him. The slight forward pressure on the stick would have caused the aircraft to enter a slow descent, maintained by the CWS system.[33]

Investigation into the aircraft's autopilot showed that the force required to switch to CWS mode was different between the A and B channels (15 vs 20 pounds respectively). Thus it was possible that the switching to CWS in channel A did not occur in channel B thus depriving the first officer of any indication the mode had changed (Channel A provides the captain's instruments with data, while channel B provides the first officer's).[34]

After descending 250 feet from the selected altitude of 2000 feet a C-chord sounded from the rear speaker.[35] This altitude alert, designed to warn the pilots of an inadvertent deviation from the selected altitude, went unnoticed[36] by the fatigued and frustrated crew. Investigators believe this was due to the crew being distracted by the nose gear light, and because the flight engineer was not in his seat when it sounded and so would not have been able to hear it.[37] Visually, since it was nighttime and the aircraft was flying over the darkened terrain of the Everglades, there were no ground lights or other visual indications that the TriStar was slowly descending into the swamp.[citation needed] It was also discovered that Captain Loft had an undetected tumor in his brain[38], and this was later found to be in an area controlling vision,[39][1] but this was not thought to have contributed to the accident.[40][41]

The final NTSB report cited the cause of the crash as pilot error, specifically: "the failure of the flight crew to monitor the flight instruments during the final four minutes of flight, and to detect an unexpected descent soon enough to prevent impact with the ground. Preoccupation with a malfunction of the nose landing gear position indicating system distracted the crew's attention from the instruments and allowed the descent to go unnoticed."[42]

Over the following months and years, employees of Eastern Air Lines began reporting sightings of the dead crew members on board another L-1011 (N318EA). The story was that parts of Flight 401 were salvaged after the crash investigation and refitted into the other L-1011. (Even though some parts were salvaged and re-used to maintain other airplanes in Eastern's fleet, the accident resulted in the total hull loss of N310EA and it was written off.) Sightings of the "spirits" of Don Repo and Bob Loft spread throughout Eastern Air Lines to the point where Eastern's management warned employees that they could face dismissal if caught spreading ghost stories.

The story of the crash and its aftermath was documented first in John G. Fuller's 1976 book The Ghost of Flight 401, and later in Rob and Sarah Elder's 1977 book, Crash.

Musician Bob Welch recorded a song on his 1979 album Three Hearts titled "The Ghost of Flight 401."

The crash also appeared in a Season 5 episode of Mayday (also known as Air Crash Investigation). The episode was titled "Who's at the Controls?" (In some countries, the title "Fatal Distraction" was used.) The "Ghost of 401" is referenced in Season 1, episode 4 of the television series Supernatural after a plane crashes under paranormal circumstances.