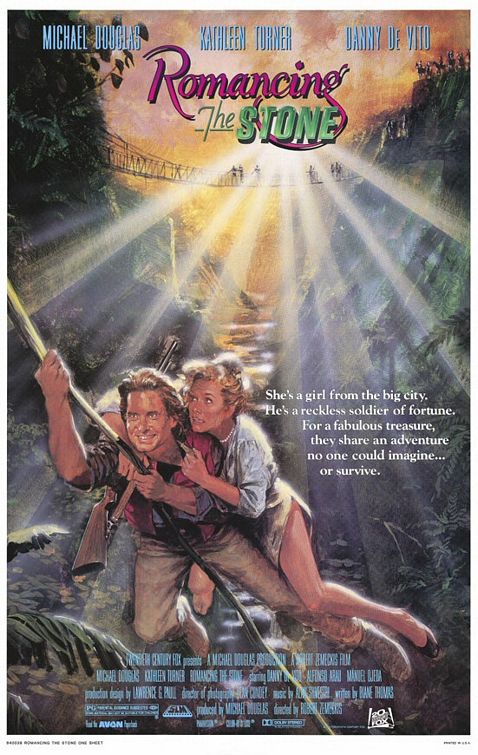 The movie was a respectable hit and earned over $114 million worldwide in receipts and $36 million in video rentals. This film also helped launch Turner to stardom, reintroduced Douglas to the public as a capable leading man, and gave Zemeckis his first box office success.

The plot of the movie revolves around romance writer Joan Wilder, played by Kathleen Turner, who travels to to find her kidnapped sister. In time she falls in love with a soldier of fortune and the two become romantically involved as they search for a precious stone which the kidnappers want.

The first few minutes of the movie depict a scene from one of Joan Wilder's novels, entitled "The Savage Secret". An evil cowboy named Grogan (Ted White) storms in on a sexy named Angelina (). He threatens to kill Angelina unless she does exactly as she's told. "Where is it?" he asks. Angelina motions to a saddlebag in the corner. What is in it is never revealed. Now that he has what he wants, she tells him to get out. Grogan smiles. "Not quite." he says. He orders her to take her clothes off. Reluctantly, Angelina begins to unlace her skirt. When she finishes with the laces, she pulls back her skirt to reveal a knife strapped to the back of her leg. While Grogan is distracted by Angelina's breasts, she throws the knife from across the room in his chest, killing him. As she prepares to leave the house, Angelina points out that Grogan killed her father, raped and murdered her sister, burned down her ranch, shot her dog, and (with comedic emphasis) stole her Bible.

She then takes back the saddlebag and rides off across the desert. She is chased by Grogan's brothers, but her lover, the heroic Jesse (), suddenly appears. He shoots her pursuers out of the saddle. The couple meet and kiss. Then, Jesse pulls her up onto his horse and, in true romantic style, rides off into the sunset.

The scene then switches to the apartment of shy, mousy, lonely romantic novelist Joan Wilder (Kathleen Turner), who has just finished writing the story. Angelina never speaks in the scene. All her lines are delivered by a by Turner.

Although the opening scene has little to do with the story, there are some connections:
# Many of Joan's fans say Jesse and Angelina are her most popular characters.
# Towards the end of the movie, during a confrontation with Zolo, Zolo asks Joan how she would like to die, "Slow like a snail, or fast like a shooting star." Grogan said something similar to Angelina. Joan also uses Angelina's knife-throwing tactic on Zolo, but Zolo blocks the knife with a piece of wood he uses as a weapon.
# At the end of the movie, Jack shows up in New York with the boat he bought with El Corazon. In honor of Joan, he has named it "Angelina".

After the opening sequence, Joan receives a strange package from her dead brother-in-law Eduardo, who was recently murdered and dismembered, from . Soon afterwards, she gets a frantic call from her sister Elaine (), telling her she has been kidnapped and needs the map from the package as ransom.

Hastily flying down to Colombia from New York, Joan gets lost on the way to her destination, Cartagena. Eventually she runs into opportunist Jack T. Colton (Douglas). In return for helping her find her way to Cartagena, Joan promises Jack US$375 in traveler's checks. He helps her elude key villains, the vicious leader of the secret police, Zolo (), who is responsible for Eduardo's murder, and a dastardly duo of zany bandits, Ralph () and Ira ().

Along the way, Jack discovers Joan's map. He tries to convince her to go after the treasure indicated on it. Joan is reluctant, but after they become lovers, she relents and agrees to go after the prize, whatever it is (the map doesn't specify). They decide they can retrieve the treasure and give the then-worthless map to the kidnappers.

After some harrowing situations and an encounter with a local smuggler and fan of Joan's novels named Juan (), who helps them escape from Zolo, they eventually find the treasure, which turns out to be an enormous about the size of a baseball, called "El Corazon" ("The Heart"). Unbeknownst to them, they have been tracked by the malevolent Zolo and by Ralph, who steals El Corazon from them. But before he can escape with it, Zolo's men appear on the scene as well as the Colombian Police. After getting El Corazon back from Ralph, Joan and Jack drive their car into a raging river to escape and end up going over a waterfall. Further complicating the matter is that they both end up on opposite sides of the river with no way of crossing over to each other. Zolo's men arrive and begin shooting at them from the nearby cliffs and they split up, agreeing to meet at Joan's hotel in Cartagena. Jack doesn't show up, which troubles Joan, since he possesses the gem.

She meets with Ralph and Ira, her sister's captors, and turns over the map. They are interrupted by Zolo, who knows the map is now worthless. Zolo's men have Jack, but he has refused to disclose the location of El Corazon. When Zolo threatens to feed Joan to the crocodiles, Jack gives up the gem, which he has been hiding on his person, slinging it off his foot towards Zolo's crocodile pit.

Zolo catches El Corazon, but his hand (together with the gem), is bitten off by one of the crocodiles and a gunfight breaks out between Zolo's private army and Ira's men. This allows Joan, Elaine and Jack to escape. Jack chases the hand-eating croc, while Joan and Elaine just try to get away. After a prolonged gunfight with Zolo's men, Ira and his gang seize the opportunity to escape, leaving Ralph behind.

Zolo catches Joan and Elaine. Joan tries to kill Zolo with his own switchblade in a scene mirroring that of the beginning of the movie, but Zolo blocks the thrown knife with a piece of wood. After Elaine faints from the sight, Joan, within earshot of Jack, pleads for his help. He must decide whether to save her or hold onto the croc which has ingested El Corazon. He decides to try to save Joan by scaling a rock wall to reach her. While Jack is climbing to her rescue, Zolo catches Joan, but she manages to fight him off by first burning him with his own cigar, then hitting him on the remains of his severed hand with another piece of wood. Zolo falls on top of a fallen oil lamp, catching his back on fire. In a maddened rage, he charges at Joan, but misses and falls into a pit full of crocodiles. Seeing that the women are safe, Jack leaves to pursue El Corazon once more.

Joan returns home to New York, more optimistic, though lonely without Jack. She churns out a hit novel based on her recent experiences and her publisher, Gloria () is positive is will be her best seller yet. Returning home that same day, she finds Jack - wearing crocodile skin boots - waiting for her in a sailboat he purchased with the proceeds of El Corazon. It turns out Jack managed to catch the crocodile, who suffered "a fatal case of indigestion" from swallowing the gem. The movie ends with Jack and Joan kissing on the deck of the Angelina, named for Joan's fictional heroine, as the trailer the boat rests on drives off into the streets of New York City.

Due to the real-life threat of kidnappings in Colombia, the movie was filmed elsewhere. Locations included Veracruz, Mexico (Fort of ), and .

This was the first Zemeckis film to feature a music score by composer ; Silvestri has scored each subsequent film Zemeckis has directed. The of this film was credited to .

Although, upon its release, comparisons to "" were inevitable ("Time" magazine called the movie "a distaff "Raiders" rip-off"), [cite web | url = http://www.time.com/time/magazine/article/0,9171,921703,00.html |date = 1984-04-23 | title = The Greening of the Box Office | publisher = by Richard Corliss & Richard Schickel, "Time". | accessdate = 2007-02-09] the screenplay for "Romancing" had actually been written five years earlier. It was written by a Malibu waitress named in what would end up being her only screenplay; she died in a car crash shortly after the film's release. Though Thomas received solo writing credit, several uncredited script doctors helped to refine the film's screenplay. [ [http://www.imdb.com/name/nm0858737/bio IMDB Bio] ]

Turner later said of the film's production, "I remember terrible arguments [with Robert Zemeckis] doing "Romancing". He's a film-school grad, fascinated by cameras and effects. I never felt that he knew what I was having to do to adjust my acting to some of his damn cameras--sometimes he puts you in ridiculous postures. I'd say, 'This is not helping me! This is not the way I like to work, thank you!'" [cite web | url = http://www.ew.com/ew/article/0,,314990_4,00.html |date = 1991-08-02 | title = The Last Movie Star | publisher = "Entertainment Weekly". | accessdate = 2007-02-09] Despite their difficulties on the film, Zemeckis would go on to work with Turner again, casting her as the voice of Jessica Rabbit in 1988's "".

Studio insiders expected "Romancing the Stone" to flop (to the point that, after viewing a rough cut of the film, the producers of the then-in-the-works "Cocoon" fired Zemeckis as director of that film),