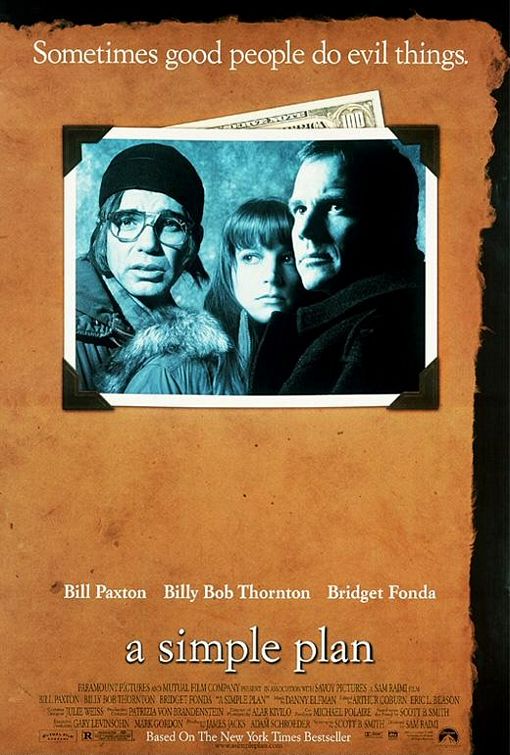 "A Simple Plan" is a thriller starring as Hank Mitchell, as Jacob, as Lou, and as Sarah. The plot of this low-key thriller turns on a bag of money found in a crashed airplane. It was based on the best-selling novel of the same name by Scott Smith (who also wrote the screenplay). Several prominent critics praised the film for its complexity and taut suspense (4 stars from and Critic's Choice from ).

Hank Mitchell () and his pregnant , Sarah, live a quiet but happy life in rural . Hank, one of the town's few residents to graduate , runs a feed mill, while his wife is a librarian. Hank's brother, Jacob (), is a dim-witted but good-hearted fellow. The story begins with Hank, Jacob, and a third friend, Lou, chasing a dog into the woods. In the woods, they find not only the , but a downed that crashed in the area some time ago. After some investigation, they see the pilot is long-since , and the only cargo seems to be a bag full of unmarked bills totaling $4 million.

Hank suggests turning the money in, but is persuaded not to do so by Jacob and Lou. Hank's condition for agreeing to a deal is that he keep the money safe at his house and no one spends anything until ends and everyone moves away when they divvy up the . All agree, and also agree to keep the discovery a secret. Immediately when they return to their vehicle, the appears and Hank nervously talks to him while Jacob unwisely mentions sounds of "a plane" in the area. Hank breaks the secrecy promise and reveals the discovery to his wife, who is overjoyed at the news.

Things start to unravel quickly. When Hank and Jacob return to the plane to put some of the back (part of a larger plan to avoid suspicion), they come across an old man on a . Jacob, wrongly thinking their cover is blown, bludgeons the man. When the man regains consciousness and asks for the , Hank suffocates him and makes it look like an accidental snowmobile . Jacob reneges on his promise to move away during the summer, and tells of his intention to buy his father's with his share of the . Lou, meanwhile, drunkenly demands some of the money from Hank, saying that he has spent recklessly since the discovery and needs cash fast. Hank refuses, and Lou threatens telling the authorities about the old man's death. Hank and Jacob team up against Lou to make sure he will not squeal about the old man's . Lou, drunk and enraged that the two would conspire against him, pulls a gun. Jacob reluctantly kills Lou to save his brother, and then Hank kills Lou's when she appears shooting another . Hank concocts a plan as to what to tell the cops, so they avoid arrest. The plan works thanks to Jacob's rehearsed speech to the authorities. Jacob tells Hank that this whole turn of events is wearing on him and that he "feels ."

Later, the sheriff calls Hank and tells him that the FBI has arrived in town, looking for a downed plane that may have crashed in the area. Because Jacob has mentioned a "plane" earlier, the asks the two brothers to assist in the search through the woods. Sarah is immediately skeptical and fears that the FBI man in town is actually involved with the disappeared money and is looking for his lost cash. Hank isn't sure of her theory but brings a loaded gun with him just in case. Then the four (the sheriff, the FBI man, Hank and Jacob) all head into the woods. They find the plane, and Hank's worst fears are confirmed when the FBI man pulls a gun and kills the sheriff, revealing that he is indeed looking for his lost money, and not with the . Jacob and Hank manage to get the drop on the man, and Hank shoots him dead. Hank starts to concoct another story to tell the authorities, but Jacob announces he doesn't want to live with these bad memories, and will shoot himself to end it. He encourages Hank to kill him instead and frame the FBI man, so that Hank can still tell any story he wants. After grappling with the decision, Hank kills Jacob, breaking down sobbing.

At the police station, Hank tells his "story" to real FBI men, and is cleared of any wrongdoing. But he gets some unexpected bad news. The money in the plane is actually ransom money paid to kidnappers, and before it was delivered, many of the bills' were written down to track the cash and find whoever was using it. Hank realizes everything was for nothing, as he can't even one without fear of being caught. He goes home and burns all the money, with his wife struggling to stop him. Later, we see Hank and Sarah living the same unfulfilled lives they started out with.

Differences between the film and the novel

The made numerous changes to the plot, particularly to events in the second half of the novel. In the movie, after Lou and Nancy are killed, Hank does not kill Sonny or shoot Jacob; rather, he constructs a domestic dispute situation involving just Nancy and Lou, with he and Jacob walking in after Lou had killed Nancy.

Hank and Jacob's relationship is somewhat different. Though still not close, they have more affection for one another in the film than in the novel. While the Jacob of the novel is morbidly obese, the one in the film is small and skinny. Though in both the novel and the film, Jacob is a pathetic loser, in the film he is much kinder and considerate, while in the novel he is much more selfish and even scheming.

Lou in the film is married, while in the novel he lives with his girlfriend. Though spiteful and antagonistic towards Hank in both the novel and the film, in the novel Lou is notably more malicious, taking joy in ridiculing and bullying Hank.

While in the film Sarah still encourages several devious plans, in the novel she suggests that Hank murder Lou's neighbor, making her appear much more ruthless.

The film also changes Hank's reaction to finding out Baxter isn't an FBI agent. Rather than bolting, as he does in the novel, Hank stays with the plan realizing that if he leaves Baxter will kill Carl. Jacob also accompanies the crew. The result is a bloodbath, with only Hank surviving. Jacob is killed by Hank after Jacob threatens to commit suicide because he feels he can no longer live with what he's seen; Hank didn't want him to kill himself because which guns shot whom needed to align for his alibi.

Hank's killing spree at the convenience store is also excluded from the film.

Overall, the changes make the finished story less violent and Hank's character more compassionate. Hank in the film is far less murderous and even more remorseful for what he does than the Hank of the novel, who willingly executes innocent bystanders without hesitation. Hank is also depicted protecting Carl in the film, whereas in the novel he leaves Carl for dead. Much of the dialog and themes, however, are carefully maintained in both media.