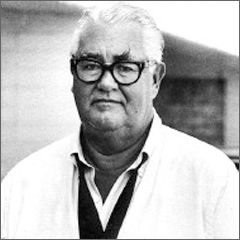 Robert Burgess Aldrich was born in , the son of Lora Lawson and newspaper publisher Edward B. Aldrich. He was a grandson of U.S. Senator and a cousin to . He was educated at the , , and studied at the . In 1941, he left university for a minor job at the , thus beginning his career as a cinéaste.

He quickly rose in film production as an assistant director, he worked with , , and , working with the latter as an assistant on "Limelight". He became a television director in the 1950s, directing his first feature film, "The Big Leaguer", in 1953. In that time, Aldrich was the rare American example of the "" film maker, depicting his liberal humanist thematic vision in many genres, in films such as "Kiss Me Deadly" (1955), today a classic, "The Big Knife" (1955), a cinematic adaptation of 's play about Hollywood as a business, "Attack" (1956), a World War II infantry combat film exploring the U.S. Army's corporate careerism, and how social class and caste determine who attack and who order the attack.

In the 1960s he directed several commercially successful films, such as the gothic horror story "What Ever Happened to Baby Jane?" (1962), featuring and as spiteful sisters and faded child-actresses; the sexually controversial "" (1968); and the war movie formula template, "" (1967). The success of "The Dirty Dozen" allowed him to establish his own film production studio for some time, but several failures forced his professional return to conventionally commercial Hollywood films. Nevertheless, his liberal humanism is thematically evident in "The Longest Yard" (1974), about the corporate, cut-throat values of rigged-game Nixonian America, and "" (1972) about the post–Civil War extermination of the Indians in the course of settling the West for white people. Thematically, "Ulzana's Raid" details the psychological and cultural tolls paid by the soldiers who must kill everyone impeding the establishment of empire.

From his marriage to Harriet Foster (1941-1965), Robert Aldrich had four children, all of whom work in the movie business: Adell, William, Alida and Kelly. In 1966, after divorcing his first wife, Harriet, he married fashion model Sybille Siegfried.