Cuenca (full name Santa Ana de los cuatro ríos de Cuenca) is the capital of the Azuay Province. It is located in the highlands of Ecuador at about 2500 m above sea level. The center of the city is listed as a UNESCO World Heritage Trust site because of its many historical buildings.

According to studies and archeological discoveries, the origins of the first inhabitants go back to the year 8060 BC in the Cave of Chopsi. They were hunters, hunting everything the Páramo offered them, and nomadic, following the animals and seasons. The culture is represented by tools such as arrows and spears, which have been found throughout the Andean alley. The culture was most present about 5585 BC.

Their technology also advanced; they started creating ceramics. These comprise the greatest number of artifacts which archeologists use to study their culture. The period from 5000 BCE to 2000 BCE is not represented well in the archeological record. Beginning around 2000 BCE, the people developed a more highly organized society, demonstrating delegated responsibilities, such as the managing of water and control of plagues. People specialized as administrative and religious authorities (known as shamans). This occurred during the periods of Chaullabamba, Huayco, Pirincay, Monjas, Putushio, Huancarcucho and Jubones. From then until 500 AD began the periods of Tacalshapa III and the Cañari people, who were absorbed into the Incas in the 15th century.

Cuenca was originally a Cañari settlement called Guapondeleg. It is believed to have been founded around 500 AD. Guapondeleg translates into "land as big as heaven." Less than half a century before the conquistadors landed, the Incas, after a bitter struggle, conquered the Cañari and occupied Guapondeleg and the surrounding area. Though the Incas replaced the Cañari architecture with their own, they did not suppress the Cañari or their impressive achievements in astronomy and agriculture. As was customary for the Incas, they absorbed useful achievements into their culture. They renamed the city Tomebamba. The city became known as the second Cusco, a regional capital.

After the defeat of the Cañari, the Inca commander, Tupac Yupanqui, ordered the construction of a grand city to be called Pumapungo, "the door of the Puma". Its magnificence was to challenge that of the Inca capital of Cuzco. Indians told stories to the Spanish chroniclers of golden temples and other such wonders, but by the time the Spaniards found the legendary city, all that remained were ruins. They wondered what happened to the fabled splendor and riches of the second Inca capital. After having been abandoned by the Cañari and then the Incas, Tomebamba was sparsely populated until the 1550s.

The Spanish settlement of Cuenca was founded on April 12, 1557 by the explorer Gil Ramírez Dávalos. Andrés Hurtado de Mendoza, then Viceroy of Peru had commissioned the founding and ordered the city named after his home town of Cuenca, Spain. It was founded decades after other major Spanish settlements in the region, such as Quito (1534), Guayaquil (1538), and Loja (1548).

Cuenca's population and importance grew steadily during the colonial era. It reached the peak of its importance in the first years of Ecuador's independence; Cuenca achieved its independence on November 3, 1820. It became the capital of one of the three provinces that made up the nascent republic. The other two capitals were Guayaquil and Quito.

Cuenca, capital of the province of Azuay, is located in the sierra of the Andes in the Austro or southern region of Ecuador. It is approximately nine hours south of Quito and four hours east of Guayaquil. The city ranges from 2,350 to 2,550 meters above sea level.

The dominant features of the city's geography are also the source of its name in Spanish: the four rivers of Cuenca (meaning a basin made by a confluence of rivers). These rivers are the Tomebamba (named after the Cañari culture), Yanuncay, Tarqui and Machangara, in order of importance. The first three of these rivers originate in the Páramo of Parque Nacional Cajas to the west of the city. These four rivers are part of the Amazon river watershed. Cuenca is surrounded by mountains on all sides, with passes to the west, south and east.

Cuenca features a subtropical highland climate under the Köppen climate classification. Like the rest of the Ecuadorian Andes, Cuenca enjoys a mild climate year-round. Days are generally warm and nights are cool enough that sweaters or jackets are needed. The average daily temperature is 58 degrees Fahrenheit. There are two seasons: rainy and dry. The dry season, with some variation, falls between June and December. The rainy season, which is characterized by bright sunny mornings and afternoon showers, falls between January and May. The heaviest rains come in the invierno of March, April and May.

Most tourists visit the historic area, which is a UNESCO World Heritage Site, between the river Tomebamba and the street Gran Colombia to the north, General Torres to the west, and Hermano Miguel to the east. This area's compactness, grid-like layout, and numerous readily identifiable monuments make it easy to navigate. Outside this area the city can be confusing, as there are dozens of narrow colonial streets with similar buildings.

Major fiestas of Cuenca come at the time of the "Mass of Children" that is carried out the day of the Arrival of Kings (January 6 - Epiphany Day), or in the commemoration of the independence of the city (November 3), during which processions, cultural acts and dances are organized. The nearby Cañar plantation (in the county of the same name) features the biggest Inca ruins in Ecuador. 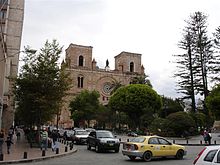 Cathedral of the Immaculate Conception. 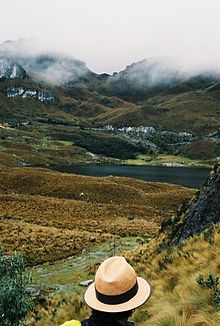 Cuenca's inter-provincial bus station, called the Terminal Terrestre as it is in most cities, is well organized and clean. It is located on Avenida España in the northeastern corner of the city, a twenty-minute walk or a brief taxi ride from the historic center. Also, many City buses provide frequent service as indicated by the "Terminal Terrestre" placard on the windshield. A guide to using the City buses, maps of the routes and an online trip planner can be found at CuencaTransit.com

Buses arrive and depart throughout the day. Service is available to major cities, such as Guayaquil and Quito and also to nearby cities such as Loja, Riobamba, or Machala. The distance to Guayaquil is 243 km. and the bus takes nearly 4 hours on the highway Durán-Pto.Inca-Molleturo, a scenic ride through the Cajas National Park. Quito is 497 km from Cuenca and the trip takes around 10 hours on the Road Pan-American South. Many prefer to travel by bus at night. Those who choose to travel overnight should exercise caution due to reported bus hijacks which have resulted in armed robbery.

The airport, named Aeropuerto Mariscal Lamar (Mariscal Lamar Airport), is located due east of the Terminal Terrestre (bus station) on Avenida España. It's a 5-minute walk from the bus station.Three airlines serve Cuenca in 2011; TAME and AeroGal fly to Quito and Guayaquil daily while LAN Ecuador only flies to Quito. RYU Peruvian airline Star Peru announced that it will begin flying to and from Chiclayo, Peru in November 2010; however operations have not started yet.