Walleye (Sander vitreus, formerly Stizostedion vitreum) is a freshwater perciform fish native to most of Canada and to the northern United States. It is a North American close relative of the European pikeperch. The walleye is sometimes also called the yellow walleye to distinguish it from the blue walleye, which is an extinct subspecies formerly found in the southern Great Lakes.

In some parts of its range, the walleye is known as the colored pike, yellow pike or pickerel (esp. in English-speaking Canada), although the fish is related neither to the pikes nor to the other pickerels, both of which are members of the family Esocidae.

Genetically, walleyes show a fair amount of variation across watersheds. In general, fish within a watershed are quite similar and are genetically distinct from those of nearby watersheds. The species has been artificially propagated for over a century and has been planted on top of existing populations or introduced into waters naturally devoid of the species, sometimes reducing the overall genetic distinctiveness of populations.

The common name, "walleye", comes from the fact that their eyes, like those of lions, reflect white light. This "eyeshine" is the result of a light-gathering layer in the eyes called the tapetum lucidum, which allows the fish to see well in low-light conditions. In fact, many anglers look for walleyes at night since this is when major feeding patterns occur. The fishes' eyes also allow them to see well in turbid waters (stained or rough, breaking waters), which gives them an advantage over their prey. Thus, walleye anglers will commonly look for days and locations where there is a good "walleye chop" (i.e., rough water). This excellent vision also allows the fish to populate the deeper regions in a lake, and they can often be found in deeper water, particularly during the warmest part of the summer.[citation needed]

Walleyes are largely olive and gold in colour (hence the French common name: doré — golden). The dorsal side of a walleye is olive, grading into a golden hue on the flanks. The olive/gold pattern is broken up by five darker saddles that extend to the upper sides. The colour shades to white on the belly. The mouth of a walleye is large and is armed with many sharp teeth. The first dorsal and anal fins are spinous, as is the operculum. Walleyes are distinguished from their close cousin the sauger by the white colouration on the lower lobe of the caudal fin which is absent on the sauger. In addition, the two dorsals and the caudal fin of the sauger are marked with distinctive rows of black dots which are absent from or indistinct on the same fins of walleyes.[1]

Walleyes grow to about 80 cm (31 in) in length, and weigh up to about 9 kg (20 lb). The maximum recorded size for the fish is 107 cm (42 in) in length and 11.3 kilograms (25 lb) in weight. The growth rate depends partly on where in their range they occur, with southern populations often growing faster and larger. In general, females grow larger than males. Walleyes may live for decades; the maximum recorded age is 29 years. In heavily fished populations, however, few walleye older than five or six years of age are encountered. In North America, where they are heavily prized, their typical size when caught is on the order of 30 to 50 cm (12 to 20 in), substantially below their potential size. 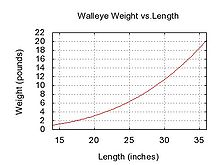 In most of the species' range, the majority of male walleyes mature at age three or four. Females normally mature about a year later. Adults migrate to tributary streams in late winter or early spring to lay eggs over gravel and rock, although there are open water reef or shoal spawning strains as well. Some populations are known to spawn on sand or on vegetation. Spawning occurs at water temperatures of 6 to 10 °C (43 to 50 °F). A large female can lay up to 500,000 eggs, and no care is given by the parents to the eggs or fry. The eggs are slightly adhesive and fall into spaces between rocks. The incubation period for the embryos is temperature-dependent, but generally lasts from 12 to 30 days. After hatching, the free-swimming embryo spends about a week absorbing the relatively small amount of yolk. Once the yolk has been fully absorbed, the young walleye begins to feed on invertebrates, such as fly larvæ and zooplankton. After 40 to 60 days, juvenile walleyes become piscivorous. Thenceforth, both juvenile and adult walleyes eat fish almost exclusively, frequently yellow perch or ciscoes, moving onto bars and shoals at night to feed. Walleye also feed heavily on crayfish, minnows, and leeches.

The walleye is considered to be a quite palatable freshwater fish, and, consequently, is fished recreationally and commercially for food. Because of its nocturnal feeding habits, it is most easily caught at night using live minnows or lures that mimic small fish. Most commercial fisheries for walleye are situated in the Canadian waters of the Great Lakes, but there are other locations, as well.

Because walleyes are popular with anglers, fishing for walleyes is regulated by most natural resource agencies. Management may include the use of quotas and length limits to ensure that populations are not over-exploited. As one example, in the state of Michigan, walleye shorter than 15 in (38 cm) may not be legally kept, except in Lake St. Clair and the St. Clair River where fish as short as 13 in (33 cm) may be taken.

Since walleyes have excellent visual acuity under low illumination levels, they tend to feed more extensively at dawn and dusk, on cloudy or overcast days and under choppy conditions when light penetration into the water column is disrupted. Although anglers interpret this as light avoidance, it is merely an expression of the walleye's competitive advantage over its prey under those conditions. Similarly, in darkly stained or turbid waters, walleye tend to feed throughout the day. In the spring and fall walleye are located near the shallower areas due to the spawning grounds; and they are most often located in shallower areas during higher winds due to the murkier, higher oxygenated water at around six feet deep.[3] On calm spring days the walleye are more often located at the deep side of the shoreline drop-off and around shore slopes around or deeper than ten feet.[4]

"Walleye chop" is a term used by walleye anglers for rough water typically with winds of 10 to 25 km/h (6 to 16 mph), and is one of the indicators for good walleye fishing due to the walleye's increased feeding activity during such conditions. In addition to fishing the "Walleye chop", night fishing with live bait can be very effective.

"Walleye Jig" is another very effective approach for catching the fish. Simply tie on a 3/8 ounce jig and attach a minnow. Lower the jig to the bottom of a sandy bottom stream and slowly move the jig up and off the bottom. When you feel a tug – wait a moment, as walleye are cautious fish and it may just be nibbling at the bait, then hook the fish. Calm water in an anchored boat is ideal for this approach. [5]

Minnesota and the Dakotas

The walleye is the state fish of Minnesota and South Dakota. It is very popular with Minnesota residents; more walleye is eaten in Minnesota than in any other jurisdiction of the United States. Both Garrison and Baudette, Minnesota, claim to be the "Walleye Capital of the World," each with a large statue of the fish.[6]