Angels & Demons is a 2000 bestselling mystery-thriller novel written by American author Dan Brown and published by Pocket Books. The novel introduces the character Robert Langdon, who is also the protagonist of Brown's subsequent 2003 novel, The Da Vinci Code, and 2009 novel, The Lost Symbol. It also shares many stylistic literary elements with its sequel, such as conspiracies of secret societies, a single-day time frame, and the Catholic Church. Ancient history, architecture, and symbolism are also heavily referenced throughout the book. A film adaptation was released on May 15, 2009, though it was set after the events of The Da Vinci Code film, which had been released in 2006.

The book contains several ambigrams created by real-life typographer John Langdon.[1] Besides the "Angels And Demons" and "Illuminati" designs, the title of the book is also presented as an ambigram on the hardcover book jacket (see illustration at right on this page), and on the inside cover of the paperback versions. The book also contains ambigrams of the words Earth, Air, Fire, and Water, which has served to bring the art of ambigrams to public attention by virtue of the popularity of the book.[2] The "Illuminati Diamond" mentioned in the book is an ambigram of the four elements arranged in the shape of a diamond.

The plot follows Harvard symbologist Robert Langdon, as he tries to stop the Illuminati, a legendary secret society, from destroying Vatican City with the newly discovered power of antimatter.

CERN director Maximilian Kohler discovers one of the facility's physicists, Leonardo Vetra, murdered. His chest is branded with an ambigram of the word "Illuminati". Kohler contacts Robert Langdon, an expert on the Illuminati, who determines that the ambigram is authentic. Kohler calls Vetra's adopted daughter Vittoria to the scene, and it is ascertained that the Illuminati have stolen a canister containing antimatter — a substance with destructive potential comparable to a small nuclear weapon. When at CERN the canister is stored in a unique electrical charger which ensures the anti-matters stability but when removed its back-up battery provides power for 24 hours after which the anti-matter will self-destruct. The canister is somewhere in Vatican City, with a security camera in front of it, as its digital clock counts down to the explosion.

Langdon and Vittoria make their way to Vatican City, where the Pope has recently died. It is discovered that the four Preferiti, cardinals who are the most likely papal successor, are missing. Langdon and Vittoria search for the Preferiti in hopes that they will also find the antimatter canister. Their search is assisted by Camerlengo Carlo Ventresca (the late pope's closest aide) and the Vatican's Swiss Guard.

Langdon attempts to retrace the steps of the "Path of Illumination", a process once used by the Illuminati as a means of inducting new members; aspirants to the order were required to follow a series of subtle clues left in various landmarks in and around Rome. The clues indicate the secret meeting place of the Illuminati. Langdon sets off on the Path of Illumination in hopes of delivering the Preferiti and recovering the antimatter canister. 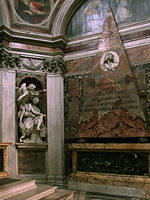 After finding the bodies of the first two Preferiti, Langdon hurries to the Santa Maria della Vittoria Basilica and finds the Preferiti's abductor in the act of setting the third cardinal on fire. The kidnapper is an unnamed assassin who is working under the orders of the Illuminati master "Janus", whose true identity is unknown. Commander Olivetti is killed and the assassin kidnaps Vittoria. Langdon escapes and accosts the assassin at the final element's landmark (Water), but is unable to save the cardinal. 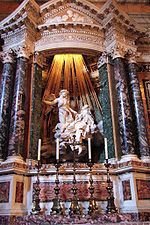 Langdon must complete the Path of Illumination in order to find the assassin and rescue Vittoria. His search leads him to Castel Sant'Angelo, that hides a tunnel leading directly into the pope's chambers in the Vatican. Langdon frees Vittoria, and together they send the assassin falling several hundred feet to his death. The two hurry back to St. Peter's Basilica, where they find that Kohler has arrived to confront the camerlengo in private. Langdon and Vittoria fear that Kohler is Janus, and that he has come to murder the camerlengo. Hearing the camerlengo scream in agony from being branded with the Illuminati Diamond, the Swiss Guards burst into the room and open fire on Kohler. Just before he dies, Kohler gives Langdon a videotape that he claims will explain everything. 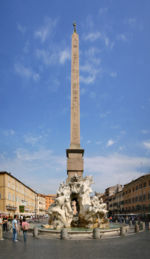 The Fountain of Four Rivers.

With time running out, the Swiss Guard evacuates the Basilica. The camerlengo rushes back in, claiming that he has received a vision revealing the location of the antimatter canister. With Langdon in pursuit, the camerlengo ventures into the catacombs and finds the canister sitting atop the tomb of Saint Peter. Langdon and the camerlengo retrieve the antimatter and get in a helicopter with only minutes to spare. The camerlengo manages to parachute safely onto the roof of St. Peter's just as the canister explodes harmlessly in the sky. The crowd in St. Peter's Square look in awe as the camerlengo stands triumphantly before them. Because of this "miracle", the papal conclave debate whether to elect the camerlengo as the new Pope. Langdon managed to survive the explosion by using a window cover from the chopper as a parachute, and landed in the Tiber River.

After viewing Kohler's tape Langdon, Vittoria, and the cardinals confront the camerlengo; Shortly before the beginning of the novel, the Pope met with Leonardo Vetra who believed that anti-matter was capable of establishing a link between Man and God. Vetra's beliefs caused great discomfort to the camerlengo. While discussing Vetra, the pope reveals that his support is due to science having given him a son. Without waiting to hear the explanation (that the child was the result of artificial insemination), and horrified that the Pope appeared to have broken his vow of chastity, the camerlengo plots to "rectify" the situation. He poisoned the pope and, under the guise of an Illuminati master (Janus), he recruited the assassin, to kill Vetra, steal the antimatter, and kidnap and murder the Preferiti. The Camerlengo planted the antimatter in St. Peter's in order to be seen as the savior of Christendom. The Illuminati "involvement" was merely a plot engineered by the camerlengo to cover his own plans. It is revealed that Camerlengo Ventresca himself was the birth son of the late pope, conceived through artificial insemination. Overcome with guilt Ventresca soaks himself in oil and immolates himself before a crowd of onlookers in St. Peter's Square.

The book's first edition contained numerous inaccuracies of location of places in Rome, as well as incorrect uses of Italian language. Some of the language issues were corrected in the following editions.[3]

Aside from the explicit introduction, the book depicts various fictional experts explaining matters in science, technology, and history in which critics have pointed out inaccuracies. An example of this is the antimatter discussions, wherein the book suggests that antimatter can be produced in useful and practical quantities and will be a limitless source of power. CERN has published a FAQ on Angels and Demons, stating that antimatter cannot be used as an energy source because creating it takes more energy than it produces.[4]

Angels & Demons Decoded, a documentary on an American cable television network, The History Channel, premiered on May 10, 2009, shortly before the release of the novel's film adaptation. The documentary explores the various bases of the novel's story, as well as its inaccuracies. A CERN official, for example, points out that over the last 20 years, approximately 10 billionths of a gram of antimatter has been produced at the facility, whose explosive yield is equivalent to that of a firecracker, far less than is needed for it to be the threat depicted in the novel.[5]