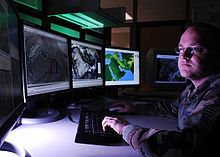 Military weather specialist in US

Military meteorology is meteorology applied to military purposes, by armed forces or other agencies. It is one of the most common fields of employment for meteorologists.

University meteorology departments grew rapidly as the military services sent cadets to be trained as weather officers. Wartime technological developments such as radar also proved to be valuable meteorological observing systems. More recently, the use of satellites in space has contributed extensively to military meteorology.