The Buyid dynasty, also known as the Buyid Empire[1] or the Buyids (Persian: آل بویه Āl-e Buye), also known as Buwaihids, Buyahids, or Buyyids, were a Shī‘ah Persian[2][3][4][5][6] dynasty that originated from Daylaman in Gilan.[7] They founded a confederation that controlled most of modern-day Iran and Iraq in the 10th and 11th centuries. 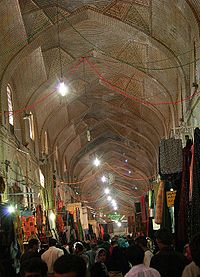 The founders of the Būyid confederation were ‘Alī ibn Būyah and his two younger brothers, al-Hassan and Aḥmad. Originally a soldier in the service of the Ziyārīds of Ṭabaristān, ‘Alī was able to recruit an army to defeat a Turkish general from Baghdad named Yāqūt in 934. Over the next nine years the three brothers gained control of the remainder of the 'Abbāsid Caliphate. While they accepted the titular authority of the caliph in Baghdad, the Būyid rulers assumed effective control of the state.

The first several decades of the Būyid confederation were characterized by large territorial gains. In addition to Fars and Jibal, which were conquered in the 930s, and central Iraq, which submitted in 945, the Būyids took Kermān (967), Oman (967), the Jazīra (979), Ṭabaristān (980), and Gorgan (981). After this, however, the Būyids went into a slow decline, with pieces of the confederation gradually breaking off and local dynasties under their rule becoming de facto independent.[8]

The approximate century of Būyid rule, coupled with the rise of other Iranian dynasties in the region, represents a period in Iranian history sometimes called the 'Iranian Intermezzo' since it was an interlude between the rule of the 'Abbāsid Arabs and the Seljuq Turks.[9] Indeed, as Dailamite Iranians the Būyids consciously revived symbols and practices of Persia's Sassānid dynasty.[10] In fact, beginning with 'Adud al-Dawla they used the ancient Sassānid title Shāhanshāh (Persian: شاهنشاه), literally "king of kings".[11][12]

The Buyid confederation was split between and governed by multiple members of the dynasty. They nominally recognized the suzerainty of caliphs of Baghdad, who in reality had no temporal power within the state. The title used by the Buyid rulers was amīr, meaning "governor" or "prince". Generally one of the amīrs would be recognized as having seniority over the others; this individual would use the title of amīr al-umarā',[12] or senior amīr. Although the senior amīr was the formal head of the Būyids, he did not usually have any significant control outside of his own personal amirate; each amir enjoyed a high degree of autonomy within his own territories. As mentioned above, some of the stronger amīrs used the Sassānid title of Shāhanshāh. Succession of power was hereditary, with fathers dividing their land among their sons. 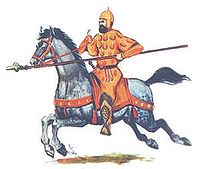 The Būyid army consisted of their fellow Dailamite Iranians, who served as foot soldiers, and of the Turkish cavalry that had played a prominent role in the 'Abbāsid military. The Dailamites and Turks often quarreled with each other in an attempt to be the dominant force within the army.[13] To compensate their soldiers the Būyid amīrs often distributed iqtā's, or the rights to a percentage of tax revenues from a province, although the practice of payment in kind was also frequently used.[14]

Like most Daylamites at the time, the Būyids were originally Zaydī or Fiver Shī'as. After taking power in Iran and Iraq, however, they began to lean closer to Twelver Shī'ism, possibly due to political considerations.[15] In fact, the Būyids rarely attempted to enforce a particular religious view upon their subjects except when in matters where it would be politically expedient. The Sunnī 'Abbāsids retained the caliphate, although they were deprived of all secular power. In addition, in order to prevent tensions between the Shī'a and Sunni from spreading to government agencies, the Būyid amirs occasionally appointed Christians to high offices instead of Muslims from either sect.[16]

During the mid-11th century, the Buyid amirates gradually fell to the Ghaznavid and Seljuq Turks. In 1055, Tughrul conquered Baghdad, the seat of the caliphate, and ousted the last of the Buyid rulers. Like the Buyids, the Seljuqs kept the Abbasid caliphate as the titular ruler.[17]

Buyids were Shia and have been called Twelver Shia. However, it is more likely that began as Zaydi Shia'.[18] As the reason of this turning from Zaydis to Twelver Moojen Momen suggests that since the Buyids were not descendants of Ali, the first Shia Imam, Zaydis Shi'ism doctrine would have urged them to install an Imam from Ali's family. For that reason Buyids tended toward Twelver Shia' which its occulted Imam was more politically attractive to them.[18]

Generally, the three most powerful Buyid amirs at any given time were those in control of Fars, Jibal and Iraq. Sometimes a ruler would come to rule more than one region, but no Buyid rulers ever exercised direct control of all three regions. Daylamids of Fars

Power in Fars seized by the Shabankara Kurdish Chief Fadluya 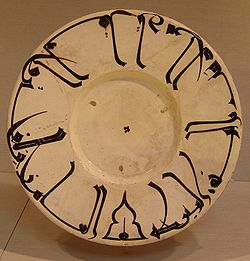 It was not uncommon for younger sons to found collateral lines, or for individual Buyid members to take control of a province and begin ruling there. The following list is incomplete.

[6] The Buyid Domination as the Historical Background for the Flourishing of Muslim Scholarship During the 4th/10th Century by Dr. M. Ismail Marcinkowski*