/kɒmpˈsɒɡnəθəs/;[1] Greek kompsos/κομψος; "elegant", "refined" or "dainty", and gnathos/γναθος; "jaw")[2] was a small, bipedal, carnivorous theropod dinosaur. The animal was the size of a turkey and lived around 150 million years ago, the early Tithonian stage of the late Jurassic Period, in what is now Europe. Paleontologists have found two well-preserved fossils, one in Germany in the 1850s and the second in France more than a century later. Today, C. longipes is the only recognized species, although the larger specimen discovered in France in the 1970s was once thought to belong to a separate species, C. corallestris.

Many presentations still describe Compsognathus as a "chicken-sized" dinosaur because of the small size of the German specimen, which is now believed to be a juvenile form of the larger French specimen. Compsognathus is one of the few dinosaurs for which the diet is known with certainty: the remains of small, agile lizards are preserved in the bellies of both specimens. Teeth discovered in Portugal may be further fossil remains of the genus.

Although not recognized as such at the time of its discovery, Compsognathus is the first theropod dinosaur known from a reasonably complete fossil skeleton. Until the 1980s and 1990s, Compsognathus was the smallest known non-avialan dinosaur and the closest supposed relative of the early bird Archaeopteryx. Thus, the genus is one of the few dinosaur genera to be well known outside of paleontological circles. 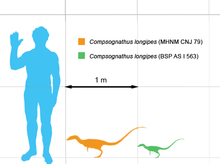 Size comparison of the French (orange) and German (green) specimens, with a human

For decades, Compsognathus was famed as the smallest dinosaur known; the specimens collected were around 1 meter (3 ft) in length. However, dinosaurs discovered later, such as Caenagnathasia, Microraptor and Parvicursor, were even smaller. The largest Compsognathus specimen is estimated to have weighed somewhere between 0.83 and 3.5 kg (between 1.8 and 7.7 lb).[3][4] 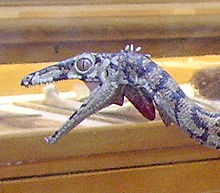 This model at the Oxford University Museum of Natural History shows the animal's narrow skull and long, tapered snout

Compsognathus was a small, bipedal animal with long hind legs and a longer tail, which it used for balance during locomotion. The forelimbs were smaller than the hindlimbs and featured three digits equipped with solid claws suited for grasping prey. Its delicate skull was narrow and long, with a tapered snout. The skull had five pairs of fenestrae (skull openings), the largest of which was for the orbit (eye socket).[5] The eyes were large in proportion to the rest of the skull.

The lower jaw was slender and had no mandibular fenestra, a hole in the lower jawbone commonly seen in archosaurs. The teeth were small but sharp, suited for its diet of small vertebrates and possibly other small animals, such as insects. Its frontmost teeth (those on the premaxilla) were unserrated, unlike those further back in the jaw. Scientists have used these dental characteristics to identify Compsognathus and its closest relatives.[6] 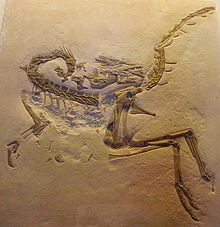 Joseph Oberndorfer discovered this fossil in Bavaria, Germany, in the 1850s. Shown here is a cast at the Oxford University Museum of Natural History.

Compsognathus is known from two nearly complete skeletons, one from Germany that is 89 cm long (35 in) and another from France that is 125 cm (49 in).[7] The physician and fossil collector Joseph Oberndorfer discovered the German specimen (BSP AS I 563) in the Solnhofen lithographic limestone deposits in the Riedenburg-Kelheim region of Bavaria during the 1850s. The limestone of the Solnhofen area has also yielded such well-preserved fossils as Archaeopteryx with feather impressions and some pterosaurs with imprints of their wing membranes that are dated to the lower Tithonian age. Johann A. Wagner discussed the specimen briefly in 1859, when he coined the name Compsognathus longipes,[8] and described it in detail in 1861.[9] In early 1868, Thomas Huxley compared the two species and concluded that, apart from its arms and feathers, the Archaeopteryx skeleton was closely similar to Compsognathus, and that the proto-bird was related to the dinosaurs.[10][11] In 1896, Othniel Marsh recognized the fossil as a true member of the Dinosauria.[12] John Ostrom thoroughly redescribed the species in 1978, making it one of the best-known small theropods at that time.[13] The German specimen is on display at the Bayerische Staatsammlung für Paläontologie und historische Geologie (Bavarian State Institute for Paleontology and Historical Geology) in Munich, Germany.

Cast of the fossil from Canjuers, France

The larger French specimen (MNHN CNJ 79) was discovered around 1971 in the Portlandian lithographic limestone of Canjuers near Nice in southeastern France.[14] It dates to the lower Tithonian. Although Bidar originally described the specimen as a separate species called Compsognathus corallestris,[15] Michard and others have since relabeled it as another example of Compsognathus longipes.[16][14] Quimby identified the smaller German specimen as a juvenile of the same species.[17] In 1983, the Muséum national d'histoire naturelle in Paris acquired the French Compsognathus fossil; Michard thoroughly studied it there.[16] Scientists originally identified a partial foot, also from Solnhofen, as belonging to a Compsognathus, but later research has disproved this. Zinke has assigned teeth from the Kimmeridgian Guimarota formation of Portugal to the genus.[18] 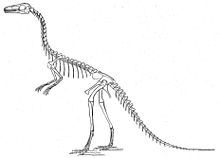 Historical restoration of the skeleton by O.C. Marsh

Compsognathus gives its name to the family Compsognathidae, a group composed mostly of small dinosaurs from the late Jurassic and early Cretaceous periods of China, Europe and South America.[14] For many years it was the only member known; however in recent decades paleontologists have discovered several related genera. The clade includes Aristosuchus,[19] Huaxiagnathus,[20] Mirischia,[21] Sinosauropteryx,[22][23] and perhaps Juravenator[24] and Scipionyx.[25] At one time, Mononykus was proposed as a member of the family, but this was rejected by Chen and coauthors in a 1998 paper; they considered the similarities between Mononykus and the compsognathids to be an example of convergent evolution.[6] The position of Compsognathus and its relatives within the coelurosaur group is uncertain. Some, such as theropod expert Thomas Holtz Jr. and co-authors Ralph Molnar and Phil Currie in the landmark 2004 text Dinosauria, hold the family as the basalmost of the coelurosaurs,[26] while others as part of the Maniraptora.[27][28]

Quarry where the French specimen was found.

During the late Jurassic, Europe was a dry, tropical archipelago at the edge of the Tethys Sea. The fine limestone in which the skeletons of Compsognathus have been found originated in calcite from the shells of marine organisms. Both the Solnhofen and Canjuers area where Compsognathus has been preserved were lagoons situated between the beaches and coral reefs of the Jurassic European islands in the Tethys Sea.[29] Contemporaries of Compsognathus include the early bird Archaeopteryx and the pterosaurs Rhamphorhynchus and Pterodactylus. The same sediments in which Compsognathus has been preserved also contain fossils of a number of marine animals such as fish, crustaceans, echinoderms and marine mollusks, confirming the coastal habitat of this theropod. No other dinosaur has been found in association with Compsognathus, indicating that this little dinosaur might in fact have been the top land predator in these islands.

In a 2001 study conducted by Bruce Rothschild and other paleontologists, 9 foot bones referred to Compsognathus were examined for signs of stress fracture, but none were found.[30]

The Compsognathus specimen discovered in Germany in the 19th century featured only two digits on each forelimb, leading scientists to conclude that this was how the creature appeared in life.[13] However, the fossil discovered later in France revealed the manus (hands) to have had three digits,[31] similar to other members of compsognathid genera. The fossilization of the German Compsognathus had simply failed to preserve the specimen's forefeet. Bidar supposed that the French specimen had webbed forefeet, which would look like flippers in life.[15] In the 1975 book The Evolution and Ecology of the Dinosaurs, L. B. Halstead depicts the animal as an amphibious dinosaur capable of feeding on aquatic prey and swimming out of reach of larger predators.[32] Ostrom debunked this hypothesis[13] by showing conclusively that the French specimen was nearly identical to the German specimen in every aspect but its size. Peyer confirmed these conclusions.[14]

This 1903 illustration by Franz Nopcsa von Felső-Szilvás shows the gastric content of the German specimen.

The remains of a lizard in the German specimen's thoracic cavity show that Compsognathus preyed on small vertebrates.[6] Marsh, who examined the specimen in 1881, thought that this small skeleton inside Compsognathus belly was an embryo, but in 1903, Franz Nopcsa concluded that it was a lizard.[33] Ostrom identified the remains as belonging to a lizard of the genus Bavarisaurus,[34] which he concluded was a fast and agile runner due to its long tail and limb proportions. This in turn led to the conclusion that its predator, Compsognathus, must have had sharp vision and the ability to rapidly accelerate and outrun the lizard.[13] The Bavarisaurus is in a single piece, indicating that Compsognathus must have swallowed its prey whole. The French specimen's gastric contents consist of unidentified lizards or sphenodontids.[14]

Excavators discovered eggs 10 mm in diameter near the fossil remains of the German Compsognathus. In 1901, Friedrich von Huene interpreted them as dermal ossifications.[35] Griffiths redescribed them as immature eggs in 1993.[36] However, later researchers have doubted their assignment to the genus because they were found outside the body cavity of the animal. A well-preserved fossil of Sinosauropteryx, a genus related to Compsognathus, shows two oviducts bearing two unlaid eggs. These proportionally larger and less numerous eggs of Sinosauropteryx cast further doubt on the original identification of the Compsognathus eggs.[6]

Skin and connection with birds

Evidence from related species suggest that the body might have been covered with feather-like structures.

For nearly a century, Compsognathus was the only well-known small theropod. This led to comparisons with Archaeopteryx and to suggestions of a relationship with birds. In fact, Compsognathus, rather than Archaeopteryx, piqued Huxley's interest in the origin of birds.[37] The two animals share many similarities in shape, size and proportions, so many in fact that a featherless skeleton of an Archaeopteryx was for many years misidentified as a Compsognathus.[5] Many other dinosaurs, including Deinonychus, Oviraptor and Segnosaurus, are now known to have been more closely related to birds.

Some relatives of Compsognathus, namely Sinosauropteryx and Sinocalliopteryx, have been preserved with the remains of simple feathers covering the body like fur,[22] promoting some scientists to suggest that Compsognathus might have been feathered in a similar way.[38] Consequently, many depictions of Compsognathus show it with a covering of downy proto-feathers. However, no feathers or feather-like covering have been preserved with Compsognathus fossils, in contrast to Archaeopteryx, which was found in the same sediments. Karin Peyer, in 2006, reported skin impressions preserved on the side of the tail starting at the 13th tail vertebra. The impressions showed small bumpy tubercles, similar to the scales found on the tail and hind legs of Juravenator.[39] Additional scales had earlier been reported by Von Huene, in the abdominal region of the German Compsognathus, but Ostrom later disproved this interpretation.[13][35]

Like Compsognathus, and unlike Sinosauropteryx, a patch of fossilized skin from the tail and hindlimb of the possible relative Juravenator shows mainly scales, though there is some indication that simple feathers were also present in the preserved areas.[40] This may mean that a feather covering was not ubiquitous in this group of dinosaurs.[41]

Children's dinosaur books commonly feature Compsognathus. For a long time it was unique in its small size, as most other small dinosaurs were discovered and described a century or more later.[42][43]