A gravitational lens refers to a distribution of matter (such as a cluster of galaxies) between a distant source (a background galaxy) and an observer, that is capable of bending (lensing) the light from the source, as it travels towards the observer. This effect is known as gravitational lensing and is one of the predictions of Albert Einstein's General Theory of Relativity.

Although Orest Chwolson is credited as being the first to discuss the effect in print in 1924, the effect is more commonly associated with Einstein, who published a more famous article on the subject in 1936.

Fritz Zwicky posited in 1937 that the effect could allow galaxy clusters to act as gravitational lenses. It was not until 1979 that this effect was confirmed by observation of the so-called "Twin QSO" SBS 0957+561.

A gravitational image can be confused with image of a Strömgren sphere. The following tests can distinguish between the two types of images: - the spectra of a Strömgren sphere are discrete, and hydrogen lines are dominant. - the phases of two adjacent spots of Strömgren spheres differ by pi, so a well visible necklace consists of an even number of spots. 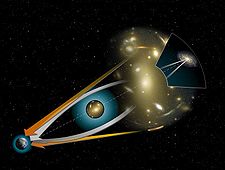 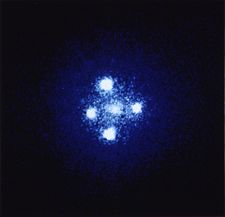 In the formation known as Einstein's Cross, four images of the same distant quasar appear around a foreground galaxy due to strong gravitational lensing

Unlike an optical lens, maximum 'bending' occurs closest to, and minimum 'bending' furthest from, the center of a gravitational lens. Consequently, a gravitational lens has no single focal point, but a focal line instead. If the (light) source, the massive lensing object, and the observer lie in a straight line, the original light source will appear as a ring around the massive lensing object. If there is any misalignment the observer will see an arc segment instead. This phenomenon was first mentioned in 1924 by the St. Petersburg physicist Orest Chwolson,[1] and quantified by Albert Einstein in 1936. It is usually referred to in the literature as an Einstein ring, since Chwolson did not concern himself with the flux or radius of the ring image. More commonly, where the lensing mass is complex (such as galaxy groups and clusters) and does not cause a spherical distortion of space–time, the source will resemble partial arcs scattered around the lens. The observer may then see multiple distorted images of the same source; the number and shape of these depending upon the relative positions of the source, lens, and observer, and the shape of the gravitational well of the lensing object.

There are three classes of gravitational lensing:[2]

1. Strong lensing: where there are easily visible distortions such as the formation of Einstein rings, arcs, and multiple images.

2. Weak lensing: where the distortions of background sources are much smaller and can only be detected by analyzing large numbers of sources to find coherent distortions of only a few percent. The lensing shows up statistically as a preferred stretching of the background objects perpendicular to the direction to the center of the lens. By measuring the shapes and orientations of large numbers of distant galaxies, their orientations can be averaged to measure the shear of the lensing field in any region. This, in turn, can be used to reconstruct the mass distribution in the area: in particular, the background distribution of dark matter can be reconstructed. Since galaxies are intrinsically elliptical and the weak gravitational lensing signal is small, a very large number of galaxies must be used in these surveys. These weak lensing surveys must carefully avoid a number of important sources of systematic error: the intrinsic shape of galaxies, the tendency of a camera's point spread function to distort the shape of a galaxy and the tendency of atmospheric seeing to distort images must be understood and carefully accounted for. The results of these surveys are important for cosmological parameter estimation, to better understand and improve upon the Lambda-CDM model, and to provide a consistency check on other cosmological observations. They may also provide an important future constraint on dark energy.

3. Microlensing: where no distortion in shape can be seen but the amount of light received from a background object changes in time. The lensing object may be stars in the Milky Way in one typical case, with the background source being stars in a remote galaxy, or, in another case, an even more distant quasar. The effect is small, such that (in the case of strong lensing) even a galaxy with a mass more than 100 billion times that of the sun will produce multiple images separated by only a few arcseconds. Galaxy clusters can produce separations of several arcminutes. In both cases the galaxies and sources are quite distant, many hundreds of megaparsecs away from our Galaxy.

Gravitational lenses act equally on all kinds of electromagnetic radiation, not just visible light. Weak lensing effects are being studied for the cosmic microwave background as well as galaxy surveys. Strong lenses have been observed in radio and x-ray regimes as well. If a strong lens produces multiple images, there will be a relative time delay between two paths: that is, in one image the lensed object will be observed before the other image.

According to general relativity, mass "warps" space–time to create gravitational fields and therefore bend light as a result. This theory was confirmed in 1919 during a solar eclipse, when Arthur Eddington observed the light from stars passing close to the sun was slightly bent, so that stars appeared slightly out of position.

Einstein realized that it was also possible for astronomical objects to bend light, and that under the correct conditions, one would observe multiple images of a single source, called a gravitational lens or sometimes a gravitational mirage.

However, as he only considered gravitational lensing by single stars, he concluded that the phenomenon would most likely remain unobserved for the foreseeable future. In 1937, Fritz Zwicky first considered the case where a galaxy could act as a source, something that according to his calculations should be well within the reach of observations.

It was not until 1979 that the first gravitational lens would be discovered. It became known as the "Twin QSO" since it initially looked like two identical quasistellar objects; it is officially named SBS 0957+561. This gravitational lens was discovered accidentally by Dennis Walsh, Bob Carswell, and Ray Weymann using the Kitt Peak National Observatory 2.1 meter telescope.

In the 1980s, astronomers realized that the combination of CCD imagers and computers would allow the brightness of millions of stars to be measured each night. In a dense field, such as the galactic center or the Magellanic clouds, many microlensing events per year could potentially be found. This led to efforts such as Optical Gravitational Lensing Experiment, or OGLE, that have characterized hundreds of such events.

In general relativity, light follows the curvature of spacetime, hence when light passes around a massive object, it is bent. This means that the light from an object on the other side will be bent towards your eye, just like an ordinary lens. Since light always moves at a constant speed, lensing changes the direction of the velocity of the light, but not the magnitude.

Light rays are the boundary between the future, the spacelike, and the past regions. The gravitational attraction can be viewed as the motion of undisturbed objects in a background curved geometry or alternatively as the response of objects to a force in a flat geometry. The angle of deflection is:

toward the mass M at a distance r from the affected radiation, where G is the universal constant of gravitation and c is the speed of light in a vacuum. Some care needs to be taken in defining this distance because gravity is not instantaneous: like light, it propagates at speed c.[3] The path of the gravitational wave and the electromagnetic radiation intersect at specific space–time coordinates, and the lensing is determined by the component of the incident gravitational wave perpendicular to the direction of the electromagnetic radiation's motion. 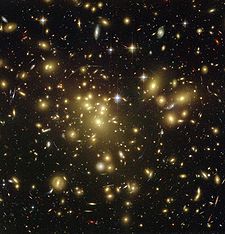 3D map of the large-scale distribution of dark matter, reconstructed from measurements of weak gravitational lensing with the Hubble Space Telescope. 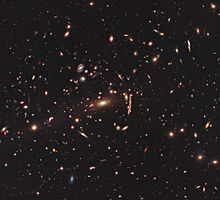 Most of the gravitational lenses in the past have been discovered accidentally. A search for gravitational lenses in the northern hemisphere (Cosmic Lens All Sky Survey, CLASS), done in radio frequencies using the Very Large Array (VLA) in New Mexico, led to the discovery of 22 new lensing systems, a major milestone. This has opened a whole new avenue for research ranging from finding very distant objects to finding values for cosmological parameters so we can understand the universe better.

A similar search in the southern hemisphere would be a very good step towards complementing the northern hemisphere search as well as obtaining other objectives for study. As can be expected, if such a search is done using well calibrated and well parametrized instrument and data, we can expect to have a very good outcome. The use of the Australia Telescope 20 GHz (AT20G) Survey data collected using the Australia Telescope Compact Array (ATCA) stands to be such a collection of data. As the data were collected using the same instrument maintaining a very stringent quality of data we should expect to obtain good results from the search. The AT20G survey is a blind survey at 20 GHz frequency in the radio domain of the electromagnetic spectrum. Due to the high frequency used, the chances finding gravitational lenses increases as the relative number of compact core objects (e.g. Quasars) are higher (Sadler et al. 2006). This is important as the lensing is easier to detect and identify in simple objects compared to objects with complexity in them. This search involves the use of interferometric methods to identify candidates and follow them up at higher resolution to identify them. Full detail of the project is currently under works for publication.

In a recent article on Science Daily (Jan. 21 2009) a team of scientists led by a cosmologist from the U.S. Department of Energy's Lawrence Berkeley National Laboratory has made major progress in extending the use of gravitational lensing to the study of much older and smaller structures than was previously possible by stating that weak gravitational lensing improves measurements of distant galaxies.[4]