Moab Tailings is a uranium mill waste pond situated alongside the Colorado River, currently under the control of the U.S. Department of Energy. Locals refer to it as the Moab Tailings Pile. In 1952 Charlie Steen found the largest uranium deposit in the United States near Moab, Utah. The uranium was processed by the Uranium Reduction Company and the waste slurry was stored in an unlined pond adjacent to the river. The Uranium Reduction Company was sold in 1962 and renamed the Atlas Uranium Mill. 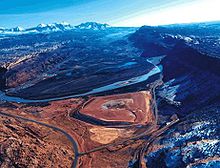 Aerial view of the Atlas Mill Site near Moab, Utah, prior to the removal of the tailings pile

After the mill was closed in 1984 the pond was capped. There was also a pile of mine tailings that was over 90 feet tall at its highest point.[1] It is believed that pollutants from the waste tailings is leaching into the river, inferred from the lethal effect on fish, primarily from high concentrations of ammonia. In August 2005 the Department of Energy announced that 11.9 million short tons (10.8 million tonnes) of radioactive tailings would be moved, mostly by rail, and buried in a lined hole. The proposed holding site is public land at Crescent Junction, Utah, about 30 miles from the Colorado River. In February 2006 a final Environmental Impact Statement met with United States Environmental Protection Agency approval. The cost of the relocation was originally estimated to be $300 million dollars, but 2008 Department of Energy estimates are in excess of $720 million dollars.[2]

The contract for the first transfer of the tailings has been awarded and the first relocation is expected to occur in late 2008. A series of works to extract and evaporate the water and ammonia from the pile before it reaches the Colorado River has been completed.

The current United States Department of Energy plan to move the tailings is contracted out to EnergySolutions who will haul the tailings from the current Atlas Uranium Mill site to the tiny town of Crescent Junction, Utah by railroad. This plan is based on the most current funding schedule which will provide for a complete removal by 2028.

A series of amendments to the Defense Authorization Act, sponsored by Rep. Jim Matheson are attempting to move the completion date to 2019. If these become law, the rate of removal would be doubled.

According to the current plan, huge "dirty" trucks will pull 40-ton containers filled with tailings to a structure that will be located between the talings and Potash Road. Once in the structure the containers would be covered by lids. A radiological survey verifies that they have no radioactive material on the outside, and the containers will then be hauled by "clean" trucks up to a railroad line to be placed on rail cars for the transportation to the disposal site near Crescent Junction. Dirty trucks will never travel to the clean side of the lidding structure, and clean trucks will never be on the dirty side.

Once at Crescent Junction the process will be reversed, with the exception that the tailings will be dumped out of end gates rather than from the top to minimize dust as well as prevent contamination to the outside containers. A knife-edge seal will be employed to ensure no materials dribble out of the end gates during the transfer.

Six clean trucks will make 22 to 23 loops per day, on a 21.2-minute cycle, between the lidding area and the rail line. About 136 containers will be transported daily with a four-day per week schedule.

An overpass is to be built across Potash Road so haul trucks will never encounter highway traffic.[3]

Rail shipments began in April 2009.[4] The clean trucks were replaced by the rail line, with the containers still needed to be lidded as before. On March 3, 2010, the Department of Energy announced it had shipped one million tons of tailings.[5]