Charles Bonnet syndrome (CBS) is a condition that causes patients with visual loss to have complex visual hallucinations, first described by Charles Bonnet in 1760[1][2] and first introduced into English-speaking psychiatry in 1982.[3]

Sufferers, who are mentally healthy people with often significant visual loss, have vivid, complex recurrent visual hallucinations (fictive visual percepts). One characteristic of these hallucinations is that they usually are "lilliput hallucinations" (hallucinations in which the characters or objects are smaller than normal). The most common hallucination is of faces or cartoons[4]Sufferers understand that the hallucinations are not real, and the hallucinations are only visual, that is, they do not occur in any other senses, e.g.: hearing, smell or taste.[5][6] Among older adults (>65 years) with significant vision loss, the prevalence of Charles Bonnet syndrome has been reported to be between 10% and 40%; a recent Australian study has found the prevalence to be 17.5%.[2] Two Asian studies, however, report a much lower prevalence.[7][8] The high incidence of non-reporting of this disorder is the greatest hindrance to determining the exact prevalence; non-reporting is thought to be as a result of sufferers being afraid to discuss the symptoms out of fear that they will be labelled insane.[6]

People suffering from CBS may experience a wide variety of hallucinations. Images of complex colored patterns and images of people are most common, followed by animals, plants or trees and inanimate objects. The hallucinations also often fit into the person's surroundings.[2]

CBS predominantly affects people with visual impairments due to old age or damage to the eyes or optic pathways. In particular, central vision loss due to a condition such as macular degeneration combined with peripheral vision loss from glaucoma may predispose to CBS, although most people with such deficits do not develop the syndrome. The syndrome can also develop after bilateral optic nerve damage due to methyl alcohol poisoning.[9]

There is no treatment of proven effectiveness for CBS. It usually disappears within a year or 18 months, but this can vary greatly from person to person. Some people experience CBS for anywhere from a few days up to many years, and these hallucinations can last only a few seconds or continue for most of the day. For those experiencing CBS, knowing that they are suffering from this syndrome and not a mental illness seems to be the best treatment so far, as it improves their ability to cope with the hallucinations. Most people with CBS meet their hallucinations with indifference, but they can still be disturbing because they may interfere with daily life. It seems that there are a few activities that can make the hallucinations stop although many people are not aware of these. Interrupting vision for a short time by closing the eyes or blinking is sometimes helpful.[2]

Because there is no prescribed treatment, the physician will consider on a case by case basis whether to treat any depression or other problems that may be related to CBS. A recent case report suggests selective serotonin reuptake inhibitors may be helpful.[10] 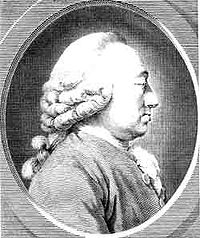 Charles Bonnet, the first person to describe the syndrome.

The disease is named after the Swiss naturalist Charles Bonnet, who described the condition in 1769. He first documented it in his 89-year-old grandfather [11] who was nearly blind from cataracts in both eyes but perceived men, women, birds, carriages, buildings, tapestries, physically-impossible circumstances and scaffolding patterns.[12][4]

The syndrome is discussed in Vilayanur S. Ramachandran's book Phantoms in the Brain and in Vikram Chandra's book Sacred Games. Ramachandran suggests that James Thurber, who was blinded in one eye as a child, may have derived his extraordinary imagination from the syndrome.[13]