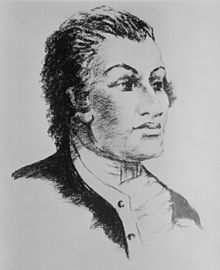 Descended from Jewish refugees from Portugal, Solomon was born in Leszno, Poland. He studied Hebrew and had basic education, but he did not know how to write in Yiddish.[2] In the 18th century, he journeyed throughout western Europe, during which time he acquired a knowledge of finance as well as fluency in several languages. He returned to Poland in 1770 but left two years later during the Partitions of Poland. After traveling to England, Solomon immigrated to New York City in 1775, where he established himself as a financial broker for merchants engaged in overseas trade.[3][4]

Sympathizing with the Patriot cause, Solomon joined the New York branch of the Sons of Liberty. In September 1776, he was arrested as a spy but the British pardoned him, only after serving 18 months of his sentence and claims of torture on a British boat, in order to use his abilities as an interpreter for their Hessian mercenaries. Solomon used his position to help prisoners of the British escape and encouraged the Hessians to desert the war effort. In 1778 Solomon was arrested again and sentenced to death, but he managed to escape, whereupon he made his way with his family to the rebel capital in Philadelphia.[5]

Once resettled, Solomon resumed his activities as a broker. He became the agent to the French consul, as well as the paymaster for the French forces in North America. In 1781, he began working extensively with Robert Morris, the newly appointed Superintendent for Finance for the Thirteen Colonies.[6] Often working out of the "London Coffee House" in Philadelphia, Solomon sold about $600,000 in Bills of Exchange to his clients, netting about 2.5% per sale. During this period he had to turn to Morris for help when one sale of over $50,000 nearly sent him to prison. Morris used his position and influence to sue the defrauder and saved Solomon from default and disaster.

In August of 1781, the Continental Army had trapped Lieutenant General Charles Cornwallis in the little Virginia coastal town of Yorktown. George Washington and the main army and the Count de Rochambeau with his French army decided to march from the Hudson Highlands to Yorktown and deliver the final blow. But Washington's war chest was completely empty, as was that of Congress. Washington determined that he needed at least $20,000 to finance the campaign. When Morris told him there were no funds and no credit available, Washington gave him a simple but eloquent order: "Send for Haym Solomon". Haym again came through, and the $20,000 was raised. Washington conducted the Yorktown campaign, which proved to be the final battle of the Revolution, thanks to Haym Solomon.[7]

Solomon negotiated the sale of a majority of the war aid from France and Holland, selling bills of exchange to American merchants. Solomon also personally supported various members of the Continental Congress during their stay in Philadelphia, including James Madison and James Wilson. Acting as the patriot he was, he requested below market interest rates, and he never asked for repayment.[8]

The Treaty of Paris, signed on September 3, 1783, ended the Revolutionary War but not the financial problems of the newly established nation. It was Haym Solomon who managed, time-after-time, to raise the money to bail out the debt-ridden government.

In July 1777, Solomon married Rachael Franks, the daughter of Moses Franks, of a prominent colonial period Jewish family that included loyalist and revolutionary sympathizers. Their first child, a boy named Ezekiel, was born in New York in the summer of 1778; later, in Philadelphia, they had two daughters, Sarah and Deborah. Rachel Solomon, she gave birth to her fourth child three months after her husband's death and named the baby Haym M. Salomon.

Solomon was involved in Jewish community affairs, being a member of Congregation Mikveh Israel in Philadelphia, and in 1782, made the largest individual contribution towards the construction of its main building. In 1783, Solomon was among the prominent Jews involved in the successful effort to have the Pennsylvania Council of Censors remove the religious test oath required for office-holding under the State Constitution. In 1784, he answered anti-Semitic slander in the press by stating: "I am a Jew; it is my own nation; I do not despair that we shall obtain every other privilege that we aspire to enjoy along with our fellow-citizens."

After a solid career in Philadelphia, he saw opportunity in a different state. Former client Robert Morris tried to help him establish himself in New York. He died shortly after he had decided to move back to the city and become an auctioneer there.

His obituary in the Independent Gazetteer read, "Thursday, last, expired, after a lingering illness, Mr. Haym Salomon, an eminent broker of this city, was a native of Poland, and of the Hebrew nation. He was remarkable for his skill and integrity in his profession, and for his generous and humane deportment. His remains were yesterday deposited in the burial ground of the synagogue of this city."[9][10]

The gravesite of Haym Salomon Mikveh Israel Cemetery is located in the 800-block of Spruce Street in Philadelphia. Though unmarked, there are two plaque memorials. The east wall has a marble tablet that was installed by his great-grandson, William Salomon, and a granite memorial is set inside the cemetery gate. In 1980, the Haym Solomon Lodge #663 of the fraternal organization B'rith Sholom sponsored a memorial in the Mikveh Israel Cemetery on the north side of Spruce Street between 8th and 9th Streets in Philadelphia. A blue ribbon panel and committee, including Robert S. Whitman, Sidney Bruskin and Marvin Abrams, all lodge past presidents, arranged for the renovation of the walls and walkways of the cemetery. They then arranged for and oversaw the installation of a large, engraved memorial marker of Barre Granite just inside the cemetery gates, inscribed "An American Patriot".[11]

When Salomon died, it was discovered he had been speculating in various currencies and debt instruments. His family sold them at market rates, which had greatly depreciated because of the weakened state of the American economy in the 1780s. Subsequent generations misunderstood his truly patriotic actions and appealed to Congress for more money, but were turned down twice. A myth grew that he had lent the young United States government about $600,000, and at his death about $400,000 of this amount had not been repaid. This sum was added to what he had actually lent to statesmen and others while performing public duties and trusts. Jacob Rader Marcus wrote in Early American Jewry that the sum owed to Solomon was $800,000. That amount in 1785 is equivalent in today's purchasing power to about $40 billion (using relative share of GDP which indicates purchasing power) in 2005 US dollars.[12]

It is said that during the American Revolution, Salomon went to France and raised an additional £3.5 million from the Sassoon and Rothschild banking houses and families. However, David Sassoon had not been born yet, and would later start up his counting house in Bombay, India, not France. Likewise, the Rothschild family had not set up a bank in France yet either. At the time of the Revolutionary war, the Rothschild's patriarch, Mayer Amschel Rothschild, founder of the banking dynasty, was still in Hesse-Kassel (Hesse-Cassel), loyally serving its prince, Wilhelm IX, who aided the British against the Americans by supplying Britain with his Hessian mercenaries.

Salomon spoke eight languages.[13] Supposedly, when he was in France, he passed himself off as a French diplomat. Unfortunately, it does not conform to known fact. It is true his co-religionist, David Franks, did help Adams negotiate loans from Holland. However, there is nothing in the record to show that Solomon himself went to Europe for this purpose.

Salomon is sometimes alleged to have written the first draft of the United States Constitution[citation needed] but the Philadelphia Convention occurred after his death. Others have claimed that he designed The Great Seal of the United States and that he included the Star of David, a Jewish symbol, above the eagle's head. There is no documentary evidence to support this claim.[14]

In 1893, a bill was presented before the 52nd United States Congress ordering a gold medal be struck in recognition of Solomon's contributions to the United States.

In 1941, the writer Howard Fast wrote a book Haym Salomon, Son of Liberty. That same year the George Washington-Robert Morris-Haym Solomon Memorial by Lorado Taft was erected along Wacker Drive in downtown Chicago.

In 1946, a memorial statue was erected to Solomon at Hollenbeck Park in Los Angeles. The statue was rededicated in 2008 at Pan-Pacific Park in the Fairfax District, where it can be found on the corner of Gardner and Third Street.[15]

In 1975 the United States Postal Service issued a commemorative stamp honoring Haym Saloman for his contributions to the cause of the American Revolution. This stamp, like others in the "Contributors to the Cause" series, was printed on the front and the back. On the glue side of the stamp, the following words were printed in pale green ink: "Financial Hero—Businessman and broker Haym Salomon was responsible for raising most of the money needed to finance the American Revolution and later to save the new nation from collapse".