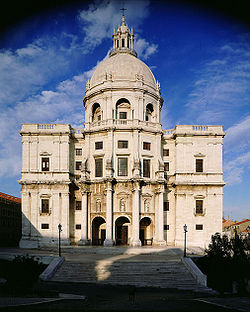 Main façade of the Church of Santa Engrácia.

The Church of Santa Engrácia (Portuguese: Igreja de Santa Engrácia, pronounced: [iˈɡɾeʒɐ dɨ ˈsɐ̃tɐ ẽˈɡɾasiɐ]) is a 17th century monument of the city of Lisbon, in Portugal. In the 20th century the church has been converted into the National Pantheon (Panteão Nacional, pronounced: [pɐ̃tiˈɐ̃w̃ nɐsiuˈnaɫ]), in which important Portuguese personalities are buried. It is located in the neighbourhood of Alfama, close to another important Lisbon monument, the Monastery of São Vicente de Fora.

The current building of the Church of Santa Engrácia substituted previous churches dedicated to a martyr of the city of Braga, Saint Engrácia. The first church dedicated to the Saint was sponsored by Princess Maria, daughter of King Manuel I, around 1568. In 1681, building of the current church began after previous structures collapsed. The author of the new design was João Antunes, royal architect and one of the most important baroque architects of Portugal.

Building work proceeded from 1682 through 1712, when the architect died. King John V lost interest in the church, concentrating his resources in the gigantic Convent of Mafra. The church was left unfinished until the 20th century, so that Obras de Santa Engrácia (lit. Saint Engrácia's works) has become a Portuguese synonym for long unfinished works. Eventually a dome was added, whereupon the church was reinaugurated in 1966.

João Antunes prepared an ingenious design for Santa Engrácia, never before attempted in Portugal. The church has a centralised floorplan, with a Greek cross shape (a cross with arms of equal length). On each corner there is a square tower (the pinnacles were never completed), and the façades are ondulated like in the baroque designs of Borromini. The main façade has an entrance hall (galilee) and three niches with statues. The entrance to the church is done through a beautiful baroque portal with the coat-of-arms of Portugal held by two angels. The Church has a high central dome which was completed only in the 20th century. 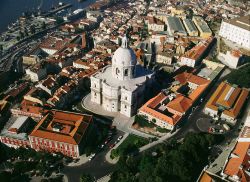 Church of Santa Engrácia seen from the air.

The harmonious interior of the church is dominated by the curved spaces of the central crossing and naves. The floor and walls are decorated with baroque, polychromed patterns of marble. The magnificent 18th-century baroque organ was brought from Lisbon Cathedral.