The mission was scheduled to continue for a year, but was later extended and the spacecraft operated until 1 March 2009, when it was taken out of orbit. It impacted the surface of the Moon at 08:13 UTC.[2] Data gathered by Chang'e 1 was able to create the most accurate and highest resolution 3-D map ever created of the lunar surface.[8] Its sister orbital probe Chang'e 2 was launched on the first of October 2010.[9] 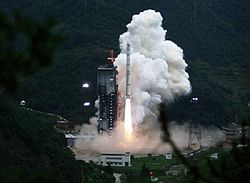 The launch of Chang'e 1 at Xichang Satellite Launch Center

According to the schedule, detailed design of the first program milestone was completed by September 2004. Research and development of a prototype probe and relevant testing of the probe were finished before the end of 2005. Design, manufacture, general assembly, test and ground experiments of the lunar orbiter were finished before December 2006.

Originally scheduled for April 2007, the launch was postponed until October as this was "a better time for sending a satellite into the Moon's orbit".[13] Chang'e 1 was launched by a Long March 3A rocket at 10:05 GMT on October 24, 2007 from Xichang Satellite Launch Center in Sichuan Province.

After liftoff, Chang'e 1 made three orbits around the Earth, a burn at perigee extending the orbit's apogee further each time, until a final translunar injection burn placed it on course for the Moon on October 31, 2007. Another burn placed it in a polar orbit around the Moon, with burns at the perilune of the first three orbits decreasing the apolune until it entered a final circular orbit. Lunar orbit insertion was achieved on the November 5, 2007. To mark this occasion, the probe transmitted 30 classical Chinese songs and musical pieces, including "My Motherland", "The Song of the Yangtze River", and "High Mountains and Flowing Water".

The probe was remotely controlled from stations at Qingdao and Kashgar, as the first use of the Chinese Deep Space Network. The ESA Maspalomas Tracking Station was also used to transmit signals to and from the probe.

The first pictures of the Moon were relayed on November 26, 2007. The probe was designed to orbit the Moon for one year,[11] but operations were later extended, and it remained in lunar orbit until March 1, 2009.

The Chang'e 1 spacecraft had a mass of 2,350 kg, with a 130 kg payload, carrying 24 instruments including a Charge-coupled device (CCD) stereo camera, microprobe instruments, and a high-energy solar particle detector.