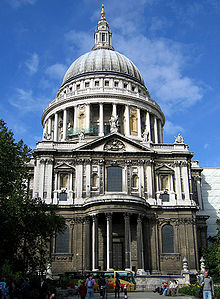 St. Paul's from the South

London is the location of many famous churches, chapels and cathedrals, in a density unmatched anywhere else in England.[1]

Before the Great Fire of London in 1666, the City of London had around 100 churches in an area of only one square mile (2.6 km2).[2] Of the 86 destroyed by the Fire, 51 were rebuilt along with St Paul's Cathedral.[3] The majority have traditionally been regarded as the work of Sir Christopher Wren, but although their rebuilding was entrusted primarily to him, the role of his various associates, including Robert Hooke and Nicholas Hawksmoor especially, is currently being reassessed and given greater emphasis[4][5] 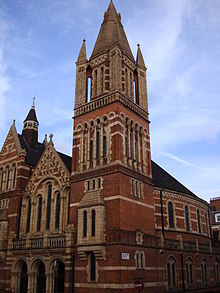 The building of the King's Weigh House (an example of nonconformist church architecture) today serves as the Ukrainian Catholic Cathedral of the Holy Family in Exile.

Most of the Anglican churches lie within the Anglican dioceses of London to the north and Southwark to the south. For historical reasons, those parts of London north of the Thames but east of the River Lea fall within the Diocese of Chelmsford. The Catholic dioceses that cover Greater London are, north of the Thames and west of the Lea, the Archdiocese of Westminster; south of the Thames the Archdiocese of Southwark; and north of the Thames and east of the Lea, the Diocese of Brentwood. There are still some two thousand Anglican churches alone, across the capital and if nonconformist and other denominations are included, they cover every age and style, in the design and evolution of which at least six hundred different architects have made contributions. As London expanded during the early 19th century, many new churches and chapels were built independently by the growing nonconformist urban population; to match the growth in nonconformist churches and chapels, the Anglican "Waterloo church" building programme saw numerous Anglican churches constructed across south London in the first half of the century.

Although many churches and chapels were entirely or partly lost to 19th-century demolitions and to bombing in the Second World War, many historic, architecturally significant and religiously significant buildings remain, particularly in the City of London and the neighbouring City of Westminster. A number of the churches are mentioned in the nursery rhyme Oranges and Lemons. Churches in this list belong to various denominations, as indicated.

Greater London is divided into 32 London Boroughs, and the City of London – the ancient core and financial centre. This list is intended to include all churches and buildings which identify themselves as a place of Christian worship, and the denominations appended are those by which they self-identify.

Further information: Churches in the City of London

The City of London is not a London Borough, but while being a ceremonial county in its own right, is within Greater London. In 1666 there were 96 parishes within the bounds of the City. Today the following continue Christian witness in one form or another in the heart of London.

Churches which do not meet in traditional Church buildings