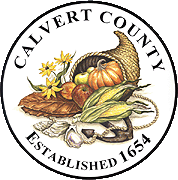 Calvert County is a located in the of . It is on a peninsula, bordered on the east by the , and on the west by the . Calvert County is part of the region. Its residents are among the highest-income in the United States. [http://en.wikipedia.org/wiki/Highest-income_counties_in_the_United_States#Counties_with_populations_65.2C000-250.2C000]

, the population was about 86,475. Its is the town of .The county's name is derived from the family name of the Barons of Baltimore, the proprietors of the English Colony of Maryland.

Calvert County is one of the several Maryland counties that make up part of the or the .

Calvert County is the home of the notable at .

A branch of the is located at .

The is located immediately to the south of Calvert County, in .

Tourism is an important part of the economy, especially in supporting such activities as fishing, hunting, and boating.Fact|date=August 2008

First settled as Charles County (not the same as present-day ) around 1650,

Once made up primarily of farms and tobacco fields, the county was/is slowly claiming its place as a fast-growing an neighbor of Washington. Many home prices have nearly quadrupled in the past decade, with many four-bedroom homes in the northern half of the county averaging over $1,000,000. The popular weekend resort towns and are notable.

Calvert County is governed by county commissioners, the traditional form of county government in Maryland.Calvert County is a jurisdiction of Maryland's 5th Congressional District. The District is represented in the U.S House of Representatives by Congressman and current House Majority Leader Steny Hoyer.

Calvert County lies in the zone, with hot, humid summers and mild to chilly winters with plentiful precipitation year-round. Its proximity to the has a moderating effect on temperatures compared with locales further inland.

Deceased:
* , an who in 1656 was tried and acquitted of murdering her unborn child by one of the earliest all-female juries in the United States.
* , the U.S. Supreme Court who presided over the Dred Scott decision.
* Former
* , first in the American colonies and the original namesake for
* Thomas Johnson, the first elected of and U.S. Supreme Court justice
* , wife of U.S. President
* , wife of U.S. President
* Former and Maryland
* Former member
* Nineteenth century professional player

Unincorporated areas are also considered as towns by many people and listed in many collections of towns, but they lack local government. Various organizations, such as the , the , and local chambers of commerce, define the communities they wish to recognize differently, and since they are not incorporated, their boundaries have no official status outside the organizations in question. The Census Bureau recognizes the following s in the county:

Dunkirk, Huntingtown, Lusby, Owings, Prince Frederick, St. Leonard and Solomons have all been designated by Calvert County government as being "town centers." The "town center" designation means while these communities may not have incorporated central governments, they do have specified boundaries surrounding the central business and residential areas for purposes. The reason behind the "town center" designation is to cluster new development within established areas with existing infrastructure, thus discouraging . The implementation of the "town center" concept in Calvert County over the past two decades has for the most part been successful in preserving rural and agricultural areas outside the designated "town centers", and stands as a key example of the planning strategy. [cite web
url=http://www.ecalvert.com/content/business/commercialrealestate/search/zoning_info.asp
title=Zoning Information
publisher=Calvert County Department of Economic Development
accessdate=2007-10-06] [cite web
url=http://www.co.cal.md.us/assets/Planning_Zoning/Slideshows/March-6-07BOCC-UpdatesToTCMP.pdf
title=Architectural Review in Calvert County
publisher=Calvert County Planning and Zoning
date=2007-03-06
accessdate=2007-10-06]

Other unincorporated places not listed as Census-Designated Places but known in the area include:

The main artery serving Calvert County is (which begins in as before crossing into and ). Route 4 in Calvert County begins at the very northern tip of the county at Lyons Creek, approximately 3 miles north of Dunkirk. At Sunderland, Route 4 meets (traveling south as a two-lane road from Annapolis) and the two roads merge as Maryland Route 2-4. Route 2-4 continues south through Prince Frederick, St. Leonard and Lusby. At Solomons, Routes 2 and 4 split again, with Route 2 heading towards downtown Solomons and Route 4 crossing the at the into St. Mary's County.

Route 2-4 is designated Solomons Island Road throughout much of the county, with the section south of Prince Frederick being recently renamed Louis Goldstein Highway in memory of , the former of and Calvert County resident.

In the 1970s and 1980s, Route 2-4 underwent an extensive expansion project, with the formerly two-lane road becoming a four-lane dual highway. Certain portions of the highway were re-aligned, with the former roadway becoming . The final portion of the dualized Route 2-4 between St. Leonard and Solomons was completed in 1988.

Other major roadways in Calvert County include:
* , which travels west from Prince Frederick to the , ultimately crossing the river at the into Charles County.
* , which starts at an overpass interchange at the Calvert-Anne Arundel border and travels southeast to Chesapeake Beach. A portion of Route 260 is a four-lane dual highway.