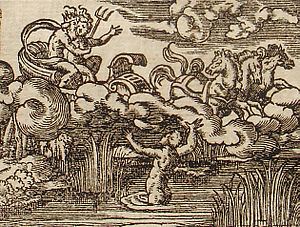 Cyane dissolves in tears, an engraving (1581) by Virgil Solis to illustrate Ovid's tale

For the butterfly genus, see Asterope.

In Greek mythology, Cyane or Kyane (Κυάνη in Greek) was a nymph who tried to prevent Hades from abducting Persephone, her playmate. Upon failure, she dissolved away in tears and melted into her pool.[1] In a slightly different version, Cyane was the Naiad (i.e. the fresh-water nymph) of a spring in the Sicilian town of Syracuse. After witnessing Hades's abduction of the goddess Persephone and trying to prevent it, she was turned to liquid by Hades.[2]

Cyane had as a partner the river god Anapos (or Anapis).[3][4] She cited their love as an example of consensual relationship while trying to convince Hades not to take Persephone by force.[5]

In the popular TV series Xena: Warrior Princess, Cyane is a recurring name of prominent Amazon warriors, each considered the reincarnation of the former one: five different Cyanes (from different times) are shown in "Xenaverse", played respectively by Vicky Pratt as "Cyane III", Selma Blair as "Cyane I", Shelley Edwards as "Cyane IV" and Morgan Reese Fairhead as "Cyane V". "Cyane II" appears in Young Hercules series, played by Katrina Browne. There are probably some other Cyanes between "Cyane I" and "Cyane II", but they are not shown in the series. All shown Cyanes are powerful and charismatic, but "Cyane IV" is somewhat aphoristic, and "Cyane V" overly polite and shy. The first Cyane came from the future: she taught Amazons to tame horses and (in a strange time loop) gave them the name "Amazons".

A powerful person, "Cyane III" defeated both Xena (in a physical battle) and Alti (in a spiritual battle). She was trusting of Xena and even offered to let her join the tribe. Xena betrayed Cyane when Alti "offered her a better deal". Alti wanted Cyane's blood, and after she drank it she kept Cyane's soul and the souls of all the Amazons in the land of the dead. She then used their power for herself and made it evil. The souls of the Amazons were trapped in the land of the dead until the reformed Xena killed Alti and found the Amazon's new holy word, Love.