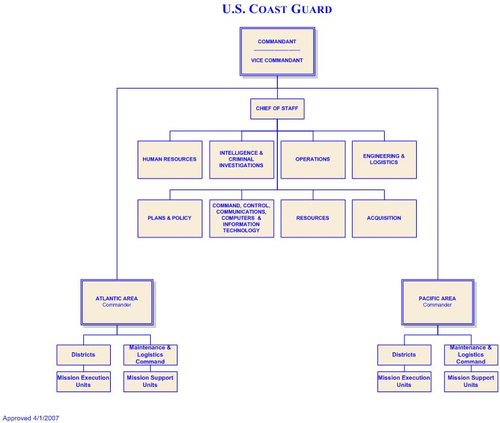 Table of Organization of the Coast Guard

This article covers the organization of the United States Coast Guard.

The headquarters of the Coast Guard is on 2100 Second Street, SW, in Washington, DC. The Coast Guard announced plans to relocate to the grounds of the former St. Elizabeths Hospital [1] in Washington. On September 9, 2009, Department of Homeland Security (DHS) Secretary Janet Napolitano and General Services Administration (GSA) Acting Administrator Paul Prouty held a ceremonial groundbreaking to commence consolidation of a new Design/Build DHS Headquarters at the St. Elizabeths Campus.[2]

The Commandant of the Coast Guard is the Coast Guard's senior officer, who, by law, holds the rank of Admiral. The Commandant is selected for a four-year term, which may be renewed for additional four-year periods. The current incumbent is Admiral Robert J. Papp, Jr., who replaced Admiral Thad Allen in a change of command ceremony on May 25, 2010.

The Vice Commandant of the Coast Guard is Vice Admiral Sally Brice-O'Hara.

The Chief of Staff of the Coast Guard is Vice Admiral John P. Currier. He also serves as Commanding Officer of Coast Guard Headquarters.

The Superintendent of the United States Coast Guard Academy is Rear Admiral J. Scott Burhoe. The Director of Reserve and Training is Rear Admiral Sandra L. Stosz.[4] In addition, each District is commanded by a Rear Admiral.

The rank of Commodore is no longer used in the regular Coast Guard. The equivalent rank is Rear Admiral (Lower Half) ("RDML"). The chief elected officers of the Coast Guard Auxiliary are referred to as Commodores ("COMO"), signifying their senior elected office, rather than a military rank.

The title of Commodore is occasionally granted to senior officers (typically of pay grade O-6, which is a Captain) who are placed in command of a group or squadron of cutters. It is not a flag rank, but rather a title used to signify command of multiple units afloat.

By maritime tradition, the commanding officer of a ship is also called "captain," regardless of actual rank held. Thus, a young junior officer commanding a patrol boat is properly called "captain" even if his or her actual rank is Lieutenant, or Lieutenant (Junior Grade). This tradition has also carried over to many shore units. Occasionally, terms like "old man" and "skipper" are also used, though not usually in the presence of the "captain." However, in current usage, the person in charge of a Coast Guard or Coast Guard Auxiliary small boat is the "coxswain" (pronounced cok-sun).

An example of a position held by a Chief Warrant Officer is commanding officer of a small cutter, such as the USCGC Abbie Burgess.[6]

Chief Petty Officers, often called "Chief," are one of the leadership backbones of the Coast Guard. Chiefs are well versed in most areas of service, and the old adage of "go ask the Chief" holds true today. Chiefs are Officers-in-Charge of Motor Lifeboat Stations, act as Engineering Petty Officers on Patrol Boats, and keep larger Coast Guard cutters on a true head bearing as Deck Watch Officers. 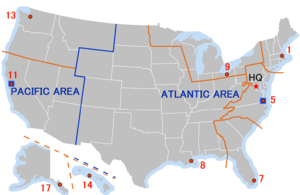 The Coast Guard is divided into two Areas, the Atlantic and the Pacific, each of which is commanded by a vice admiral, with each being designated Maritime Homeland Defense Areas.

The Coast Guard is further organized into Districts, commanded by a District Commander, a one or two-star rear admiral, with each responsible for a portion of the Nation's coastline.

There are two major activities located outside the United States:

Within each District, large operational shore-side units known as Sectors are responsible for mission execution within their area of responsibility. Sectors were formed with the merger of Groups and Marine Safety Offices. Coast Guard small boat stations are called Stations and report to Sectors. Each Sector Commander reports to the appropriate District Commander.

The directorate’s programs include all platforms and mission systems designed to modernize and recapitalize the Coast Guard’s fleet of cutters, boats, aircraft and information technology assets. Under the new organization, these programs are consolidated from the legacy Coast Guard acquisitions directorate and the Integrated Deepwater System Program. The new directorate also brings together the office of procurement management; the office of research, development and technical management; the Research and Development Center; and the head of contracting.[10]