Tri-Rail (reporting mark TRCX) is a commuter rail line linking Miami, Fort Lauderdale, and West Palm Beach, Florida, United States. It is run by the South Florida Regional Transportation Authority. The 70.9 miles (114.1 km) system has 18 stations along the South Florida coast. The system connects directly to Amtrak at numerous stations, and the Metrorail in Miami at the Tri-Rail and Metrorail Transfer Station, and in 2012, with both systems at Miami Central Station at Miami International Airport. A second Tri-Rail line on the Florida East Coast Railway corridor may be in operation by 2014, eventually extending service north to Jupiter, Florida and south to Downtown Miami and numerous inner city Miami neighborhoods such as the Design District, Little Haiti, and Wynwood. 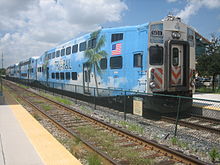 Planning for the system began in 1983, and building the organization began in 1986. The current system was formed by the Florida Department of Transportation and began operation in 1989, originally to provide temporary commuter rail service while construction crews widened Interstate 95 and the parallel Florida's Turnpike.[3] Due to higher than expected ridership, Tri-Rail outlasted its temporary status, adding more trains and stations in the process. Line extensions have enabled Tri-Rail to service all three South Florida international airports: Miami International Airport, Fort Lauderdale – Hollywood International Airport, and Palm Beach International Airport. The state's original plan was to use the more urban FEC line, but FEC declined the offer as they wanted freight to be their top priority.[4]

In 1998, the initial 67-mile route was extended north from the West Palm Beach Station to the Mangonia Park Station, and south from Hialeah Market Station (formerly Miami Airport Station) to the new Miami Airport station. Construction of the extensions began in 1996; this brought the system to 70.9 miles.

In 2007, a project to upgrade the full length of the line from Mangonia Park to Miami Airport with double-track was completed with the opening of a high-level fixed bridge over the New River near Fort Lauderdale. Once several other modernization projects are completed, the SFRTA will assume full responsibility for dispatching and maintenance from CSX.

The completion of the New River rail bridge and the addition of a second Colorado Railcar diesel multiple unit (DMU) ushered in sweeping changes to Tri-Rail's operational timetables. Tri-Rail added several more trains during peak weekday commuting hours in June 2007. During "rush-hour," trains run every twenty to thirty minutes rather than the previous schedule of every hour. This change comes at quite a fortuitous time in Tri-Rail's operation history. With gasoline prices at record highs—particularly in South Florida's sprawling metropolis—Tri-Rail has seen a double-digit percentage increase in ridership in mid-2007. 2009 saw a record high number of passengers, over 4.2 million for the year. Ridership dropped by about 600,000 in 2010 after a fare increase. In 2011, Tri-Rail again saw increasing ridership, averaging about 14,500 riders per weekday, along with sustained high gas prices. As Tri-Rail's fleet was aging, the cars were becoming crowded during the rush hour periods.[1]

Tri-Rail fare is divided into six zones for one day passes, ranging from $2.50 to $11.55, with fare calculated by the number of zones travelled through, and whether it's one way or round trip. On weekends, a $5 all day pass is available, though trains run with very long headways. For frequent use, the $100 monthly Tri-Rail pass, or the $140 Tri-Rail/Metrorail/Metrobus monthly pass is much more cost effective. Discount fares are available for senior citizens, the disabled, registered employees of registered local employers, and children under five. On weekdays, 50 train trips are made in all, with 25 in each direction, while on weekends only 16 trips, eight north and eight south, are made in all.

With the new Miami Central Station under construction as of late 2009, the Miami Airport Station would also move into the new central station, along with connections to Amtrak, Metrorail, Metrobus, MIA Mover, Greyhound and the Miami Intermodal Center.

In the 2025 and 2030 long range transportation plans, Tri-Rail has envisioned moving to or adding service on the Florida East Coast Railway (FEC) corridor, which runs parallel to U.S. 1 (Biscayne Boulevard/Brickell Avenue) in Miami-Dade County, and Federal Highway in Broward and Palm Beach counties). This corridor will provide more opportunities for pedestrian travel from stations to end destinations than does the current South Florida Rail Corridor, which must rely almost exclusively on shuttle buses for passenger distribution. Tri-Rail officials project that the project would cost about $2.5 billion and that 59,000 people a day would ride it,[4] The FEC, which denied the state's request to use the line for commuter rail in the 1980s, under new ownership has now stated that it's willing to allow the use of the 85 miles (137 km) segment of track between downtown Miami and Jupiter for passenger trains.[4]

On October 28, 2011, the SFRTA Governing Board approved a plan to run Tri-Rail local and express service on the FEC line to Downtown Miami by 2015, possibly sooner by 2014. The line would bring direct commuter rail service to Downtown for the first time since 1968. The plan will now go to the tri-county Metropolitan Planning Organization (MPO)'s boards for approval. The plan is being fast-tracked in phases to provide service on the FEC portion from Downtown Fort Lauderdale and Downtown Miami's Government Center Station as soon as 2014.[6]

Tri-Rail shares its track with Amtrak's Silver Meteor and Silver Star and CSX Transportation's Miami Subdivision. The Florida Department of Transportation purchased the track from CSX in 1989. Under the terms of the agreement, CSX would continue to provide dispatch services and physical plant maintenance for the track and would have exclusive freight trackage rights until certain conditions were met.

Tri-Rail participates in the EASY Card regional smartcard-based fare collection system along with Miami-Dade Transit. Purely paper tickets are also available for same-day or weekend use, and these latter items (or an EASY Card with paper-based receipt) can be used to transfer to Broward County Transit as well as Palm Tran. 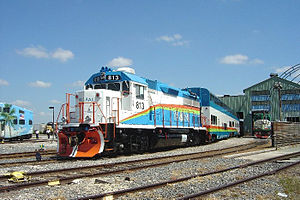 On 25 February 2011, Tri-Rail announced an order for ten Brookville BL36PH locomotives, with options for thirteen more, from the Brookville Equipment Corporation at a cost of $109 million.[8] The purchase was met with criticism by the Florida Chamber of Commerce and state lawmakers, who claimed the bidding process was flawed. Rival bidder MotivePower Industries filed a lawsuit against Tri-Rail, claiming that the bidding process was skewed in Brookville's favor.[8]

Like many other commuter rail services in the United States, Tri-Rail utilizes Bombardier BiLevel Coaches. Additional bi-level rolling stock from Colorado Railcar (4 DMU power coaches and 2 unpowered coaches) has been used since 2006. In 2010, the South Florida Regional Transportation Authority purchased new rail cars from Hyundai Rotem. The first new car was put into service in March 2011.

In 2003, after receiving a grant from the Florida Department of Transportation, Tri-Rail contracted to purchase two pieces of rolling stock from Colorado Railcar: a self-propelled diesel multiple unit, (DMU) prototype control car and unpowered bi-level coach entered regular service with Tri-Rail in October 2006. The new purpose-built railcars are larger than the Bombardier BiLevel Coaches, holding up to 188 passengers, with room for bicycles and luggage. Currently, Tri-Rail owns and operates four DMU control cars and two unpowered trailer cars. One DMU train usually consists of two DMU power cars at each end of a trailer coach (making for two complete DMU+trailer+DMU sets on the system). Because the DMUs don't run on biodiesel, Tri-Rail stopped using them recently.[citation needed]

Tri-Rail carried more passengers on National Dump the Pump Day 2011 than on any other day in its 22-year history. A record 19,731 trips were logged, breaking the previous record - set on the day of the Miami Heat Victory Parade in 2006 - by more than 1,000 riders. Rides were free on that day.[11]