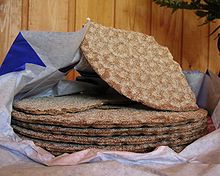 Some wafers of crisp bread

Crisp bread or hard bread[1] (Swedish: knäckebröd, hårt bröd, hårdbröd, spisbröd, Danish: knækbrød, Norwegian: knekkebrød, Finnish: näkkileipä, hapankorppu, Icelandic: hrökkbrauð, German: Knäckebrot or Knäcke) is a flat and dry type of bread or cracker, containing mostly rye flour. It is popular[2] in armies and schools because of its light weight and simple, transport-friendly shape. Also, it is very cheap and if stored in dry conditions it will keep fresh and edible for a very long time. Crisp bread is a staple food[3] and was for a long time considered a poor man's diet.[4] However, in recent years there has been renewed interest in crisp bread in the Nordic countries.

Notable brands include Ryvita and Ry-Krisp, which was introduced in 1899.[5] The largest brand is Wasabröd with Finn Crisp being the second largest producer.[6]

Crisp bread has been baked in central Sweden since 500 AD. It was made as round wafers with a hole in the middle so the bread could be stored on sticks under the roof.[7] Traditional crisp bread was invented about 500 years ago. Finland and Sweden have long traditions in crisp bread consumption and crisp bread have been known in most households since the 1800s.[8] Sweden's first industrial crisp bread bakery, AU Bergmans enka, begun its production in Stockholm in 1850.

Today, however, much crisp bread contains wheat flour, spices and grains, and is often leavened with yeast or sourdough, and milk or sesame seeds can be added.

In the case of unleavened crisp bread, bubbles are introduced into the dough mechanically. Traditionally, this was done by mixing snow or powdered ice into the dough, which then evaporated during baking.[9] Today, the dough, which must contain a large amount of water, is cooled and mixed until bubbly.

Another method is to knead the dough under pressure in an extruder. The sudden drop in pressure then causes water to evaporate, creating bubbles in the dough.

Crisp bread is only baked for a few minutes, at temperatures usually between 200 and 250 °C.

Crispbreads made of wholegrain have high amounts of dietary fiber.

The carcinogen acrylamide was accidentally discovered in foods in April 2002 by scientists in Sweden when they found the chemical in starchy foods, such as potato chips, French fries, and bread that had been heated (production of acrylamide in the heating process was shown to be temperature-dependent).[10] A 2005 study which included 43,404 Swedish women in the Women’s Lifestyle and Health Cohort found that the women's greatest single source of acrylamide was from coffee (54% of intake), fried potatoes (12% of intake), and crisp bread (9% of intake).[11] The World Health Organization (WHO) has set up a clearinghouse for information about acrylamide, and the site's FAQ addresses whether there can be an acceptable level of acrylamide in food. The WHO states that “Acrylamide belongs to the group of chemicals thought to have no reliably identifiable 'threshold' of effects, meaning that very low concentrations will also result in very low risks, but not in zero risk: some risk is always present when the chemical is ingested. However, for these carcinogens, risk is thought to increase with increasing exposure.[12]