Office in the South Bronx 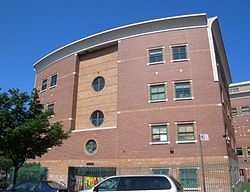 The Children’s Aid Society (CAS) is a private charitable organization based in New York City. It serves 150,000 children per year, providing foster care, medical and mental health services, and a wide range of educational, recreational and advocacy services through dozens of community centers, camps and other locations in the New York area.

The Society was founded in 1853 by philanthropist Charles Loring Brace in order to "ensure the physical and emotional well being of children and families, and to provide each child with the support and opportunities needed to become a happy, healthy and productive adult." Brace, a minister by training, was appalled by the thousands of abandoned, abused and orphaned children living in the slums and on the streets of New York at that time. The only option available to such street children at that time was commitment to jails, almshouses and orphanages.

Brace believed that institutional care stunted and destroyed children; in his view, only work, education and a strong family life could help them develop into self-reliant citizens. Brace knew that American pioneers could use help settling the American West, so he arranged to send the orphaned children to pioneer families who needed them. This became known as "The Orphan Train Movement."

The children, who were encouraged to break completely with the past, would typically arrive in a town where community leaders had assembled interested townspeople. The townspeople would then inspect the children and choose the ones they wanted.

The program was controversial; some abolitionists viewed it as a form of slavery, while some pro-slavery advocates saw it part of the abolitionist movement, since the labor provided by the children made slaves unnecessary. Some Catholics viewed the program as anti-Catholic, as a significant percentage of poor children in Manhattan were Irish Catholic, and once transported into the interior of the country they would be raised outside their faith. In response, the Archdiocese of New York upgraded their own child-welfare programs, improving the parochial school system, building more Catholic orphanages, and creating a 114-acre (46-hectare) training center on farmland in the Bronx, which they called the Catholic Protectory.[1]

Between 1854 and 1929, more than 200,000 children rode the "Orphan Train" to new lives. The Orphan Train Heritage Society maintains an archive of riders' stories.[2] The National Orphan Train Museum in Concordia, Kansas maintains records and also houses a research facility.[3]

Since then, CAS has originated a series of child welfare innovations that have since become commonplace, such as:

In the 1980s CAS created the first family court diversion programs, where social workers meet with out-of-control children and their families in an attempt to find out of court solutions.

In 1992, CAS created the first "community school", a partnership with the New York City Department of Education where a full array of health, mental and after-school, weekend and summer programs are available to students at school. The Technical Assistance Center has helped visitors from all over the United States and more than 40 foreign countries learn how to apply "community school" concepts in their schools.

With 45 sites, over 1,200 full-time employees and an annual budget of over $100 million, CAS is one of the oldest and largest child welfare agencies in the United States, claiming that 91 cents of every dollar is spent directly on services for children.

In 2009, the Children's Aid Society's board of trustees appointed Richard Buery, Jr., an attorney, as its tenth CEO. He is the first African-American to lead the society, and the youngest leader since Charles Loring Brace founded Children's Aid.[4][5][6]