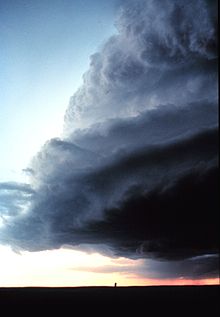 Aeromancy uses cloud formations, wind currents and cosmological events such as comets to attempt to divine the future.[2] There are sub-types of this practice which are as follows: austromancy (wind divination), ceraunoscopy (observing thunder and lightning), chaomancy (aerial vision) and meteormancy (meteors and shooting stars).[2]

The first recorded instance of the word Aeromancy being used was found in Chambers, Cycl. Supp, 1753. It was defined as "That department of science which treats of the atmosphere", rather than a form of divination.[1] However, variations on the word have been used throughout history with the earliest instance being in the Bible, though the practice is thought to have been used by the ancient Babylonian priests.[2][3]

Aeromancy was mentioned in Deuteronomy 18 as being condemned by Moses.[3] It is also condemned by Albertus Magnus in Speculum Astronomiae, who describes the practice as a derivative of nigromancy.[4] The practice was debunked by Luis de Valladolid in his 1889 work Historia de vita et doctrina Alberti Magni.[5]