A control car is a generic term for a non-powered railroad vehicle that can control operation of a train from the end opposite to the position of the locomotive. They can be used with diesel or electric motive power, allowing push-pull operation without the use of an additional locomotive.

Cab cars are control cars similar to regular passenger car, but with a full driver's compartment built into one or both ends. They can be very similar to regular railcars, to the point of including a gangway between cars so that they could be used in the middle of a passenger train like a regular car if necessary. They appeared for the first time in the United States[1] and France in the 1960s.

Trains operating with a locomotive at one end and a control car at the other do not require the locomotive to run around to the opposite end of the train when reversing direction at a terminus. Control cars can carry passengers, baggage, mail or a combination thereof, and may contain an engine-generator set to provide head end power.

In addition to the driver's cab, which has all the controls and gauges necessary for remotely operating the locomotive, control cars usually have a horn, whistle, bell, or plough (as appropriate), and all of the lights that would normally be on a locomotive.

In Britain, a common method is to control the train through a Time-Division Multiplexed (TDM) connection. In North America and Ireland a standard AAR 27-wire multiple unit cable with jumpers between cars is the preferred method.

Some commuter rail agencies in the United States routinely use cab cars in place of regular passenger coaches on trains. The Chicago and North Western Railway had 42 control cabs built by Pullman-Standard in 1960, which eliminated the need for its trains or locomotives to be turned around.[1] It was an outgrowth of multiple-unit operation that was already common on diesel locomotives of the time.

During the mid-1990s, as push-pull operations became more common in the United States, cab-cars came under criticism [2] for providing less protection to engine crews during grade crossing accidents. This has been addressed by providing additional reinforcing in cab cars. This criticism became stronger after the 2005 Glendale train crash, in which a Metrolink train collided with a Jeep Grand Cherokee at a level crossing. The train was traveling with its cab car in the front, and the train jackknifed.[3] 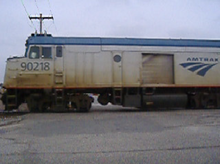 Amtrak developed their Non-powered Control Units (NPCUs) by removing the prime mover, main alternator, and traction motors from surplus F40 locomotives. The control cab was left in place, as were equipment allowing horn, bell & headlight operation. A floor and roll-up side-doors were then installed to allow for baggage service leading to the nickname "cab-baggage cars" or "cabbages.”

In Britain, this type of car is called a driving trailer and mostly this term is also used on the Continent. There are many examples of this type of vehicle in operation in Europe.

SNCB make extensive use of push-pull working. Trains are powered by class 27 or class 13 electric locomotives and are operated in one direction from a driving carriage.

The first German attempts to use control cars (German: Steuerwagen) and remote control-equipped steam locomotives were before the Second World War by the Deutsche Reichsbahn (DRG). The driver's control instructions were transmitted from the control car to the locomotive by a Chadburn-type machine telegraph (similar to engine order telegraphs on ships). The order had to be immediately acknowledged and implemented by the automatic firebox controllers. This indirect control was judged as impractical and unsafe because, although the driver controlled the brake directly, the danger existed that in an emergency the locomotive would continue supplying "push" power for some time and possibly derail the train.

Attempts to use electric locomotives (beginning with a converted E 04 class model) were more promising, as the engine driver could control the locomotive directly. World War II interrupted the test program, despite good successes. Only after the war would control car operation be slowly accepted, when locomotives and suitably equipped cars became available.

The length of train consists in push-pull operations was originally limited to 10 cars for reasons of guidance dynamics. A speed limit of 120 km/h was also imposed, rising to 140 km/h in 1980. This was not an operational hindrance, as push-pull trains were generally initially used in six-car commuter trains.

Only since the mid 1990s have long-distance trains, which can have up to 14 cars and travel at speeds of 200 km/h, been operated with control cars. A special circumstance is the ICE 2, which may operate with the control car in the lead at up to 250 km/h on the recently built high-speed lines.

Iarnród Eireann operates three classes of push-pull trainsets, each with its own Control Car:

All the Control Cars have full-sized driving cabs with EMD locomotive type power and brake controls. Locomotive control is by means of an AAR system, modified by Iarnród Éireann (IE) to include control of train doors and operate with IE 201 Class locomotives.

In Italy, the first push-pull trains began to run after World War II.

At the time there were no systems to actually remote command the rear locomotive, so an engineer had to take place in it and command traction, following instructions (via an apposite intercom) given by the other driver, who remained in the front car, commanding brakes and sighting signals. This lasted until the adoption of the 78-wire cable in the 1970s, which enabled full remote commanding from control cars.

These types allow full remote control of any Italian locomotive supplied with standard 78-wire cable, except for UIC Z1, which are used on IC services and are only able to command class E.402 locomotives, and MDVC diesel specific version, usable only with class D.445 diesel locomotives.
The same driving commands are used for both rheostatic and electronic locomotives, but their meanings change.

Vivalto type control cars, at this time, can only remote command Class E.464 and Class E.632 locomotives, because of software issues, tough are able to command other locomotive types. Vivalto cars can also use TCN remote control cable.

Driving cars can be recognized because of the "np" in their identification number and usually also have a dedicated compartment for bicycle and luggage transportation.

NS use their driving carriages in two different strategies.

For short distance trains they use a "virtual EMU" concept. Train sets are formed of a driving carriage, two or three intermediate carriages and either a class 1700 electric locomotive or an EMU motor vehicle. These train sets are diagrammed as if they were all EMUs resulting in formations with two locomotives, often at intermediate positions in the train.

For longer distance workings, including the Benelux services to Brussels the more normal mode of operation is used.

Swiss driving trailers operate in many different configurations. There are several models currently in service on S-Bahn networks as well as regional, InterRegio, and InterCity services. These are operated by the federal railway system (SBB) as well as various private railroads throughout the country (including narrow gauge lines) and into France, Germany, and Italy.

For Intercity trains there are the Bt IC that work together with EW IV and the double-deck version for the IC 2000 trainsets, working with Re 460.

The Zürich S-Bahn trainsets with Re 450 work in fix consists of Re 450 - B - AB - Bt but intermediate cars and driving trailers are numbered as coaching stock.

"NPZ" Regional and S-Bahn trains with RBDe 560 usually have a matching Bt driving trailer. Replacement by an older BDt EW I/II is technically possible. Older driving trailers, mostly BDt EW I/II and a few remaining Dt of SBB can be used with Re 420 and RBe 540 and some motive power of private railways. In theory also Re 430 and Re 620 can be controlled but these classes only work freight trains today.

The Rhaetian Railway (RhB) has, besides the ABDt that work with Be 4/4 511-516, a group of driving trailers that can be used with their Ge 4/4 I, II and III locomotives. Three of them are specially fitted for Vereina car shuttle trains.

The Matterhorn-Gotthard-Bahn (MGB) has numerous driving trailers for almost all types of motive power. They work regional trains and car shuttle trains through the Furka Base Tunnel.

Control cars have been in use in the United Kingdom for many decades, with the Great Western Railway often using 'autocoaches' on branch line services. These allowed a train driver to remotely control the regulator and reverser of a suitably equipped locomotive. The fireman remained on the locomotive to operate the boiler and locomotive whistle. Locomotives were commonly sandwiched between a pair of autocoaches, allowing a maximum of four to be used.

A Driving Brake Standard Open or DBSO is a specially converted passenger car. These have not been used on mainline passenger trains since 2006, but some have been refurbished for use on Network Rail test trains.

A Driving Van Trailer or DVT is a more modern type of control car, purpose-built to include space for baggage and a guard's office. The DVT was developed from the DBSO and originally designed to be used with British Rail Mark 3 and Mk 4 coaches. DVTs are in service with East Coast (Mk 4), Virgin Trains (Mk 3), National Express East Anglia (Mk 3) and Wrexham & Shropshire (Mk 3).