Quickmix is the name of several fictional characters in the . 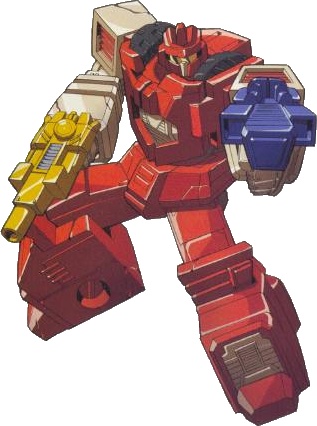 caption =
affiliation =Autobot
subgroup =Double
rank =6
function =Chemist
partner =Boomer and Ricochet
motto ="The faster it is, the better I like it."
alternatemodes =Cement Mixer
series =
voiceby =Quickmix is an impatient, short-tempered inventor who is always in a hurry. He is constantly devising new formulas and developing new ways to defeat the Decepticons. Somewhat absent-minded, he is usually too busy starting new projects to see his old experiments through to the end. He is teamed with the mercurial Nebulon, Ricochet, who transforms into a submachine gun and the bombastic Boomer, who turns into a sonic pulse cannon. In vehicle mode,he can reach a maximum speed of 150 mph.

Quickmix was a crabby, absent-minded professor at the Computechnic Institute of Microprocessor Engineering on Cybertron at the time Autobot-Decepticon hostilities began millions of years ago. His specialty was developing new materials that possessed enhanced energy-transmitting properties, a technology that, in the wrong hands, could be applied to improving weaponry. Although he wanted no part of the war, after repeated raids on his laboratory by a band of Decepticon bandits, Quickmix felt compelled to join the Autobots. But first, as going away present of sorts, he rigged his lab to blow up the next time it was broken into. Shortly thereafter, he returned. Amid the rubble of the devastated lab, Quickmix couldn't find enough pieces left of the Decepticon bandits to make into a charm bracelet. He achieved instant popularity among his new Autobot comrades. Now they know him as much for his impatience and short temper as for his brilliant inventions. He's constantly devising new formulas and gadgets to use against the Decepticons. In fact, he's so busy beginning new projects that he rarely sees old ones through to completion.

Quickmix is teamed with the Nebulans Ricochet and Boomer. On Nebulos, the mercurial Ricochet was a renowned , combining landscapes and foliage to create natural art forms. After witnessing the Decepticons trampling some of his more famous sculptures, he joined the Autobots. As is the case with so many artists, Ricochet responds poorly to criticism in any form.

Boomer is Ricochet's virtual opposite in personality. He is warm, friendly, generous- a pleasure to be around. He never has an unkind word for anyone, even the Decepticons. As head of the Consumer Complaint Agency on Nebulos, he learned to not take offense at anything. He concluded that if he could successfully deal with thousands of angry citizens, deterring a few dozen deranged Decepticons from conquering his world should be easy for him. And so he joined the Autobots.

Quickmix transforms to a ground vehicle with the outward appearance of a cement mixer truck. But in reality, his mixer tank contains a sophisticated system of sensors, gauges and catalytic agents, which allow him to create a virtually endless variety of chemical compounds and metal alloys. He applies many of these results to improving Autobot armor and weaponry. As a truck he has a maximum speed of 150 mph and a range of 450 miles. Ricochet is bio-engineered to convert to an automatic sub-machine gun that shoots metal-piercing, titanium-tipped bullets. Boomer is bio-engineered to convert to a ground-shaking, steel-shattering sonic pulse cannon, which sends out discrete waves of concentrated sonic energy. Ricochet and Boomer can also combine to form one weapon, which retains the capabilities of both components.

To operate properly and efficiently, Quickmix's mixing tank must constantly rotate. However, the tank often gets stuck. On those occasions when it contains volatile chemicals that are allowed to settle for too long, the tank - and Quickmix - can be seriously damaged.

Although the animated series ended in the U.S. before Quickmix was released, he appeared in animated form along with the other Double Targetmasters in commercials for the toys.

While an animated Transformers series continued in Japan at the time, the Double Targetmasters were not released in Japan, and therefore didn't make it to television there.

Marvel U.K. #223 contained the story called "Aspects of Evil Part 1". In this story in the year 2356 tells of his trials as Targetmaster Hot Rod and Firebolt in the year 1991. It was the end of the Decepticon Civil War, with , Shockwave and competing for leadership of the Decepticons. Scorponok was losing the battle and fled, while being tracked by Megatron's made up of Nightflight, Whisper, Tailwind and . Hot Rod was leading fellow Targetmasters Quickmix with Boomer and Ricochet and Landfill with Silencer and Flintlock when Scorponok surrendered to him. Hot Rod was oblidged to defend his prisoner from attacks by the Air Strike Patrol. Driving the Air Strike Patrol off, Scorponok escaped.

Quickmix, Quickswitch and Scoop appeared in the story "", where they were sent on a mission by to find the Decepticons in the Triangle.

Quickmix appeared in a flashback scene in issue #2 of the Transformers: Universe - Wreckers comic, where Rodimus Prime consulted Quickmix, Skids, Perceptor and Rad on his plans to send out ships to gather information on threats from space after the defeat of Unicron.

*Generation 1 Quickmix (1988):Quickmix was part of the three Double , each with their vehicle modes based on a construction vehicle. As his name suggests, Quickmix transforms into a cement mixer. His Nebulan partners are called Ricochet and Boomer. 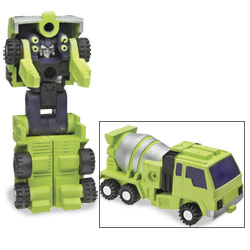 Because no has ever had the name Quickmix before, it is speculated by some fans that he and/or his fellow team member Hightower (who received an Autobot name for similar reasons) may be an undercover Autobot.

Quickmix is a redeco of the Japanese Generation 1 exclusive character Mixing. Mixing's bio states he is quite the gun-nut. His knowledge of weaponry is second to none, and his hobby is modifying Earth weaponry for his own use. On the other hand, he is also quite a pacifist, and it's his pet theory that once all the guns are his, no one could wage war anymore.

caption =Quickmix and Stripmine toys
affiliation =Autobot
subgroup =Voyagers
rank =8
function =
partner =Stripmine
motto =
alternatemodes =Gigantion Cement Mixer
series =
voiceby = (English)
(Japanese)Quickmix (Blender in Japan) is the name of a cement mixer Autobot on the . His Mini-Con is called Stripmine. He has a strong Scottish accent in the American dub of the cartoon.

Quick-thinking, intuitive and totally loyal to the Giant Planet and its inhabitants, Quickmix serves as right hand mech to Metroplex . It is he who first confronts MENASOR over the evil robot's betrayal of the Giant Planet's traditions, and who encourages Metroplex to avoid becoming involved in the affairs of the Autobots . He rarely fights, preferring his role as a builder and repairman, but when the safety of his home world is threatened, he never backs down.

According to exclusive bio information in in the Transformers Collectors' Club magazine #15 Stripmine's function is "Heavy Machine Operations" and he loves action.

Quickmix serves a role similar to what Ironhide was to Optimus Prime in the original Transformers series, as Metroplex's right-hand man and long time friend. In their first battle with the Decepticons he bested Menasor then Scourge in combat.

Reluctant at first to trust the newly arrived Autobots, after the Decepticons attack in their attempt to get to the lower levels of the planet, he agrees with his leader that they need to set aside the old rules for the greater good of the universe, and joins the Autobots.

His big moment came when Starscream tried to attack with his battleship. After Bud and the minicons were rescued from inside, Quickmix and Stripmine covered almost the ENTIRE ship in quick drying cement, immobilizing it, and for a short time trapping Starscream inside.

Quickmix supplied his fast-drying cement to Coby as a weapon for his Coby-bot vehicle, which was used against Dark Crumplezone and Ransack. During the search for the Cyber Key he was attacked by Starscream whos size is equal to Metroplex. He helped most autobots battle at Primus and the warship Ark against Ransack. This episode End is the last time transformers used their cyber key power as Quickmix cries Cyber Key Power.

In the episode "Unfinished", when the Autobots attempted to use a gigantic rocket to move the Animatros back into its orbit, Galvatron attacked and damaged the rocket. The jungle planet threatened to crash into Cybertron. Scourge, the Autobots, the former Decepticons, and their allies from the various planets were able to combine their strength and move the rocket back into place.

After the threat of Galvatron (Master Galvatron) and his Decepticons was over Optimus Prime (Galaxy Convoy) proposed a new Space Bridge project using the power of the four Cyber Planet Keys and the four great Cybertronian ships. Many Autobots and former Decepticons joined in the project. Override lead the Ogygia (Mu) and Velocitron (Speedia) Cyber Planet Key with Brakedown, Quickmix and Stripmine.

*Cybertron Quickmix with Stripmine (2006):As Quickmix seems to be a homage to Generation 1 Quickmix, the Mini-Con Stripmine seems to be a homage to the Targetmaster Boomer. In robot mode, his mixing drum composes his right arm, and in addition to still spraying chemicals opens up to reveal a powerful missile launcher inside. He also has a blaster rifle on his left arm. [http://www.youtube.com/watch?v=FT2hmQufhfQ&mode=related&search] This toy was later redecoed into "Universe" with Drill Bit.