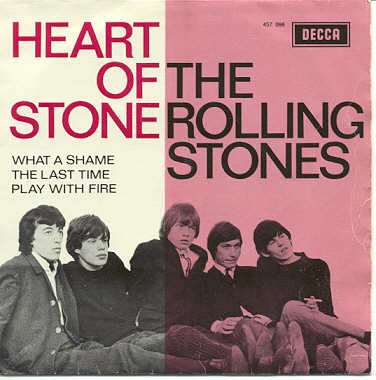 "Heart Of Stone" is a song by the English band .

Written by and , "Heart of Stone" is a inspired by and , being one of their first compositions released as a .

In his review, says, "'Heart of Stone' [is] a slow and soulful, dramatic with the kind of vaguely discordant, droning guitars heard on many an early Rolling Stones slow number. What was impressive was how the Jagger/Richards song, though similar in some respect to American soul ballads of the period... was not explicitly derivative of any one blues or soul song that they were covering on their mid-60s records. The lilt of the verses owed something to and the mournful harmonies heard on the latter part of the verses added to the overall feeling of melancholy moodiness." [Unterberger, Richie. [http://www.allmusic.com/cg/amg.dll?p=amg&token=&sql=33:jbfwxx9sldse The Rolling Stones "Heart of Stone"] . "allmusic". 2007 (accessed ).]

The song sees the singer discuss his life as a womanizer, and how one girl in particular won't break his heart;

Recording began on 2 November 1964 at Los Angeles' RCA Studios with Jagger singing, Richards and on guitars, on bass, and on drums. performs tambourine and piano.

"Heart of Stone" was released in December 1964, and became their second Top 20 hit in the US, reaching #19. The song was released the following February on the US album "", but was not given a UK release until "" in September 1965 . It was later included on the compilation discs "" and "".