David Patrick Maxwell Fyfe, 1st Earl of Kilmuir GCVO, PC, KC, (29 May 1900 – 27 January 1967), known as Sir David Maxwell Fyfe from 1942 to 1954 and as The Viscount Kilmuir from 1954 to 1962, was a British Conservative politician, lawyer and judge who combined an industrious and precocious legal career with political ambitions that took him to the offices of Solicitor General, Attorney General, Home Secretary and Lord High Chancellor of Great Britain.

One of the prosecutors at the Nuremberg Trials, he was instrumental in drafting the European Convention on Human Rights. However, he was also a controversial Home Secretary who refused clemency to commute Derek Bentley's highly controversial death sentence. His political ambitions were ultimately dashed in Harold Macmillan's cabinet reshuffle of July 1962.

Born in Edinburgh, the only son of William Thomson Fyfe, Headmaster of Aberdeen Grammar School, by his second wife Isabella Campbell, dau. of David Campbell, of Dornoch, co. Sutherland[1], he was educated at George Watson's College and Balliol College, Oxford, where, owing to his self confessed interest in politics, he achieved only a third-class degree in Greats. After graduation, he went on to work for the British Commonwealth Union as political secretary to Sir Patrick Hannon MP, studying law in his spare time. He entered Gray's Inn and was called to the bar in 1922. He became a pupil of George Lynskey in Liverpool then joined his chambers to practise.[2]

Not pausing before beginning his political career in earnest, he stood for Wigan in 1924, a parliamentary seat unwinnable for the Conservatives. Undeterred, he cultivated the more winnable Spen Valley until 1929 when the party resolved not to oppose sitting Liberal Member of Parliament (MP) Sir John Simon while he was absent on the Simon Commission in India. Maxwell Fyfe was finally elected to parliament in Liverpool West Derby in a by-election in July 1935.[2]

Meanwhile, Maxwell Fyfe's legal career had prospered, largely through his capacity for hard work. In 1934 he had become King's Counsel,[2] the youngest in 250 years.[citation needed] He was Recorder of Oldham from 1936 to 1942.[2]

Maxwell Fyfe, along with Patrick Spens, Derrick Gunston and others, backed the National Government over the Hoare-Laval Pact, and he supported Neville Chamberlain over the Munich Agreement. However, after the German occupation of Czechoslovakia in March 1939, Maxwell Fyfe joined the Territorial Army and, at the outbreak of World War II in September, he was deployed to the Judge Advocate-General's department. He was badly injured in an air raid in September 1940. In May 1941 Maxwell Fyfe became deputy to R. A. Butler's chairmanship of a Conservative Party committee to analyse forthcoming post-war problems, taking over from Butler in July 1943.[2]

Into government and on to Nuremberg 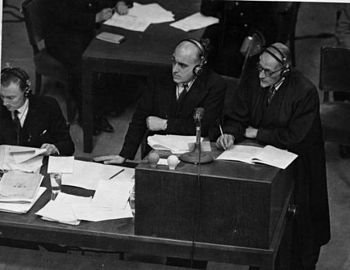 In March 1942, Sir Winston Churchill, on the advice of Brendan Bracken, appointed Maxwell Fyfe Solicitor-General. At the same time he was knighted and sworn to the Privy Council. He applied himself to his work in the wartime coalition government with enormous industry and began some of the thinking and planning about how the leaders of the Nazi regime in Germany might be brought to account after the war. As part of his duties, on 8 April 1945, he attended an Anglo-American discussion over the war crimes trial, at which, says historian Richard Overy, "he presented the standard British argument for summary execution."[3] Whether Maxwell Fyfe believed such executions were the best method of dealing with the Nazis may be doubted, in view of his later work at the Nuremberg Trials; at the time, however, as a member of the government he had little choice but to follow the lead of the Prime Minister, Churchill, who repeatedly urged that summary justice be visited upon on the Nazi leaders.[4] When the war ended and the coalition was dissolved in May 1945, Maxwell Fyfe was briefly Attorney-General in Churchill's caretaker government.[2]

The Labour Party won a landslide victory in the United Kingdom general election, 1945 and Sir Hartley Shawcross became Attorney General and took responsibility as Britain's chief prosecutor in the Nuremberg Trials. Shawcross, to emphasise the non-partisan nature of the trials, appointed Maxwell Fyfe his deputy. However, Shawcross was largely committed to his political duties in Westminster and played little part other than delivering the opening and closing speeches. Maxwell Fyfe took on most of the day-to-day responsibilities as "capable lawyer, efficient administrator and concerned housemaster".[5] There were misgivings in some quarters as to how Fyfe would perform, cross-examination not being regarded as one of his strengths. However his cross-examination of Hermann Göring is one of the most noted cross-examinations in history.[2] "Faced with sustained and methodical competence rather than brilliance, Goering ... crumbled".[6]

After Nuremberg, Maxwell Fyfe returned to parliament to shadow the Minister of Labour while simultaneously pursuing a full, busy and successful career at the Bar. Reputedly, he would arrive at the House of Commons at around 5.00 pm, often stay throughout debates that lasted all night then, after a quick shave and breakfast, leave for court. He was ably assisted in his punishing schedule by his wife, herself a Conservative Party worker.[2]

Maxwell Fyfe played a leading role in drafting the Party's Industrial Charter of 1947 and chaired the committee into Conservative Party organisation that resulted in the Maxwell Fyfe Report (1948-49). The report shifted the balance of electoral funding from the candidate to the Party, with the intention of broadening the diversity of MPs. In practice, it may have had the effect of lending more power to constituency parties and making candidates more uniform.[2]

He was notable Conservative supporter of Labour's 1948 British Nationality Act which reaffirmed the rights of Commonwealth citizens to enter Britain without restriction, showing a commitment to the unity and indivisibility of the empire. "We are proud that we impose no colour bar restrictions making it difficult for them when they arrive here... we must maintain the great metropolitan tradition of hospitality to everyone from every part of our Empire"

Maxwell Fyfe was a champion of European integration and a member of the Parliamentary Assembly of the Council of Europe from August 1949 to May 1952, becoming the Chair of the Assembly's Committee on Legal and Administrative Questions, and rapporteur on the committee drafting the European Convention on Human Rights. In his memoirs[7] he criticised Sir Anthony Eden for a negative stance that derailed the UK's opportunity to become a leader in Europe. Eden always rejected this and considered a libel action against Maxwell Fyfe.[2]

Shorty before the United Kingdom general election, 1951, Maxwell Fyfe caused a stir when appeared to hint in a radio interview that a Conservative government might legislate to curb the power of trade unions. When the Conservative Party was returned to power in the election, Churchill thought it unwise to appoint him Minister of Labour, and Maxwell Fyfe became both Home Secretary and cabinet minister for Welsh affairs. He was responsible for guiding several complicated pieces of legislation through the Commons, in particular those that established commercial television. He gained a reputation as a hard-working, thorough and reliable cabinet member.[2]

During his tenure as Home Secretary, he was embroiled in the controversy surrounding the hanging of Derek Bentley.[2] Maxwell Fyfe had controversially refused to grant a reprieve to Bentley despite the written petitions of 200 MPs and the fact that Bentley was mentally retarded having a mental age of only 11.[8] However, on most issues he was on the progressive wing of the Conservative Party, opposing the 1953 proposals for the re-introduction of corporal punishment.[2]

Maxwell Fyfe remained ambitious and a 1954 Daily Mirror opinion poll, on the popular favourite to succeed Churchill as Party leader and prime minister, had him behind Eden and Butler but well ahead of Macmillan. However, once it was clear that Eden was to be Churchill's successor, he sought the office of Lord Chancellor.[2]

In 1954 he was raised to the peerage as Viscount Kilmuir, of Creich in the County of Sutherland, and moved to the House of Lords and the "woolsack". Lord Kilmuir was a political Lord Chancellor, not restricting himself to his judicial role. He worked on many government issues including the constitution of Malta, which he wanted to become part of the UK, and the creation of the Restrictive Practices Court. In his eight years in the post he only sat as a judge on 24 appeals to the House of Lords. Lord Kilmuir opposed Sidney Silverman's 1956 private member's bill to abolish capital punishment. He described it as "an unwise and dangerous measure, the presence of which on the statute book would be a disaster for the country and a menace to the people". However, Kilmuir chaired the cabinet committee that recommended limiting the death penalty's scope and which led to the Homicide Act 1957. He feared the consequences of immigration to the United Kingdom and presented a report to the cabinet in 1956. Lord Kilmuir contended that the military intervention in the 1956 Suez Crisis was justified under the self-defence provisions of Article 51 of the United Nations Charter.[2]

This was ironic, says Geraldine Bedell, since it was he, while Home Secretary, who had set up the committee to consider whether the law should be changed.[9] As Bedell also notes: "Perhaps he thought, by handing over to a committee, to shelve the issue. Perhaps he assumed Wolfenden would find against, in which case, he chose a curious chairman, because Wolfenden had a gay son, Jeremy." Kilmuir still opposed liberalisation when a bill was introduced in the Lords (by Lord Arran) in 1965. Says Bedell: "For the opposition, Lord Kilmuir warned against licensing the 'buggers' clubs' which he claimed were operating behind innocent-looking doors all over London."[9] Maxwell Fyfe told the Conservative backbencher Sir Robert Boothby that it was not his intention to legalise homosexuality: "I am not going down in history", he told Boothby, "as the man who made sodomy legal" [10]

He continued in this office in the governments of Anthony Eden and Harold Macmillan until Macmillan's 1962 "Night of the Long Knives", when he was abruptly replaced by Sir Reginald Manningham-Buller, the Attorney-General. Kilmuir was made Baron Fyfe of Dornoch, of Dornoch in the County of Sutherland, and Earl of Kilmuir to cushion the blow of retirement.[2][11]

After government, Kilmuir joined the board of directors of Plessey but his health soon declined. He died at Withyham, Sussex and was cremated. His ashes were buried at the church of St Michael and All Angels at Withyham. His wealth at death was £22,202 and his titles, which could pass only to sons, became extinct, as he had fathered only daughters.[2]

He married Sylvia Harrison in 1925 and they had three daughters, one of whom pre-deceased him. His brother-in-law was the actor Sir Rex Harrison.[2]

Kilmuir was a formidable parliamentary presence on behalf of his party, and his remarkable memory compensated for a dull speaking style, though he was capable of passion when the circumstances were right. In appearance, "His body was pear-shaped, and beneath a large square bald head there were dark heavy eyebrows and a face of middle-eastern pallor and swarthiness".[2]

As Home Secretary, he often travelled to Wales and, in the valleys of South Wales he was nicknamed Dai Bananas, Fyffes being, then as now, one of Britain's major importers of the fruit.[12]

Among his honours were:[2]

David Maxwell Fyfe has been portrayed by the following actors in film, television and theatre productions;[13]