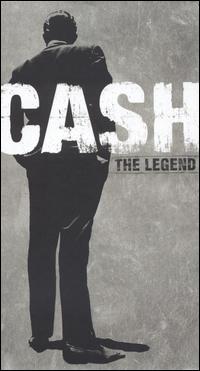 "The Legend" is a by country singer , released in 2005 (see ) on and . It is one of the few multi-disc sets that contain songs recorded throughout Cash's entire career, from 1955 to 2003. Over four CDs, most of Cash's biggest hits are covered, in addition to numerous traditional compositions Cash recorded versions of; finally, several collaborations with other known artists, including , and . In keeping with Cash's persona as the Man in Black, the data surface of the discs is black.

The first disc includes many of Cash's biggest hits, including "", "" and "Ring of Fire". The CD covers his first chart successes as well as his more well-known material from the 1970s and 1980s, including Cash's rendering of "".

The second disc was compiled in a similar fashion to the first, also including some of Cash's early hits, like "" and "", the first single he released for . It also contains several previously unreleased tracks, a selection of his later work and a number of songs from his famous "" album.

The third disc is made up primarily of traditional American compositions that have been recorded by hundreds of artists, such as "Streets of Laredo" and "".

A limited edition of the boxset features a bonus CD of a 1955 radio performance, and a bonus DVD of a March 12, 1980 CBS television special.