Tharangambadi (or Tranquebar) is a panchayat town in Nagapattinam district in the Indian state of Tamil Nadu, 15 km north of Karaikal, near the mouth of a distributary of the Kaveri River. Its name means "place of the singing waves". It was a Danish colony from 1620 to 1845, and in Danish and some other European languages it is known as "Trankebar" or "Tranquebar".

The earliest reference to Tarangampadi occurs in a 14th century inscription, mentioning the place as Sadanganpade. Tranquebar was founded by the Danish East India Company in 1620, when a factory (commercial settlement) was opened and a fort, known as Fort Dansborg, was built by a Danish captain named Ove Gjedde. This fort was the residence and headquarters of the governor and other officials for about 150 years. It is now a museum hosting a collection of artifacts from the colonial era. 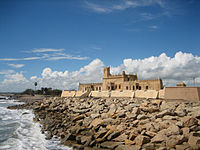 Bungalow on the Beach, Neemrana Hotels, in Tranquebar, Tamil Nadu

The first Protestant missionaries to set foot in India were two Lutherans from Germany, Bartholomäus Ziegenbalg and Heinrich Pluetschau, who began work in 1705 in the Danish settlement of Tranquebar. They translated the Bible into the local Tamil language, and afterwards into Hindustani. They also established a printing press, which within a hundred years of its establishment in 1712 had printed 300 books in Tamil.[2] At first they only made little progress in their religious efforts, but gradually the mission spread to Madras, Cuddalore and Tanjore. Today bishop of Tranquebar is the official title of a bishop in the Tamil Evangelical Lutheran Church (TELC) in South India which was founded in 1919 as a result of the German Lutheran Leipzig Mission and Church of Sweden Mission. The seat of the Bishop, the Cathedral and its Church House ("Tranquebar House") is in Tiruchirappalli.

Moravian Brethren missionaries from Herrnhut, Saxony established the Brethren's Garden at Porayar near Tranquebar and operated it as a missionary centre for a number of years. An Italian Catholic Father Constanzo Beschi, who worked in the colony from 1711 to 1740, found himself in conflict with the Lutheran pioneers at Tranquebar, against whom he wrote several polemical works.

Tranquebar came under the control of the British in 1801, during the Napoleonic Wars in Europe, but was restored to Denmark following the Treaty of Kiel in 1814. Along with the other Danish settlements in India (Serampore and the Nicobars), it was sold to the British in 1845. Tranquebar was then still a busy port, but it later lost its importance after a railway was opened to Nagapattinam.

The Fort was first based in 1620 A.D. through most part of the fort has been reconstructed several times, Tharangampadi fort consisted of two large structures. they were the rampant wall was a fairly large four sided structure with bastions at each cardinal point. along the three inner sides of the fort wall, a single storied building was constructed. These rooms were used for barracks, warehouse, kitchen and Jail. Now, the rooms on the southern side are in good condition, but the rooms on the western and northern sides have been completely damaged. On the eastern side of the fort, there was a two storied building facing the sea. It was the main building of the fort. The vaulted lower storey served as a magazine and a warehouse, while the vaulted upper storey contained the church and the lodging of the governor, the Senior merchants and the chaplain. The fort was surrounded by a moat and access to the fort was over a drawbridge. This moat has completely disappeared. The sea on the eastern and western side protected it. Because of the political situation, the British East India Company brought the Danish settlement in India in 1845. So the Danish King sold the town and the territory to the British East India Company.