The school opened in September 2007 on the site of the former Bell Road Campus of the Nova Scotia Community College. Its location bordering Bell Road, Trollope Street, and Ahern Avenue is adjacent to the Halifax Common and immediately west of Citadel Hill, a National Historic Site from which the school derives its name.

The planned construction of the new school was initially announced by the Province of Nova Scotia on 12 June 2003.[1] Designed to replace Queen Elizabeth High School and St. Patrick's High School, the school would be located on the site of the Halifax campus of the NSCC, which would subsequently be relocated to a new facility on the Dartmouth waterfront. On 31 March 2005, the HRSB announced the new name of the school, "Citadel", which was selected in a vote among other suggestions including "Halifax Central", "Willow Tree" (for the nearby traffic interchange of the same name), and "Vince Coleman" (for the Halifax Explosion hero immortalized in a Heritage Minute). There was also a motion to name the school after Anna Leonowens, who helped found NSCAD in 1887.

Construction began in the Spring of 2006, following the destruction of the old community college. The school began operation in September 2007, and was officially opened by Premier Rodney MacDonald and Minister of Education Karen Casey in November of that year.[2] The building was designed by the architectural firm of Fowler, Bauld & Mitchell, and built by Pomerleau Construction.[3][4]

During the 2011 Canada Games, Citadel High served a competition venue for wheelchair basketball and table tennis. The newly opened Spatz Theatre was also used, for the National Artist Program Gala.

Continuing in the tradition of the former St. Pat's, Citadel offers French immersion courses in many subjects, and through meeting certain credit requirements students may obtain the official provincial French Immersion Certificate at graduation.[7]

Uniquely the school also promotes Nova Scotian Gaelic language studies through several courses as well as a student society called An Dùn ("the fort", in reference to the school's name). Events and concerts are held regularly. This program was introduced with help from the Department of Education amidst a renewed interest in Gaelic culture in Nova Scotia.[8]

The school contains over 60 teaching spaces: classrooms, laboratories for biology, physics, and chemistry, computer labs, a woodworking lab, family studies kitchen and sewing facilities, two art rooms, and a drama room adjoining the newly opened auditorium, the Spatz Theatre.[9] The school is fully accessible, incorporating an elevator that was formerly installed at St. Pat's.[10] Fire safety features include ceiling-mounted strobe lights and multiple stairwell areas of refuge on each floor that isolate themselves as fireproof doors close automatically during a fire and may only be opened from one direction.

The new school includes the 980-square-metre (10,500 sq ft) Wilson's Gymnasium, named after the Wilson Fuel Co. which made a large donation towards the completion of the school theatre.[11] The second gymnasium, the Bob Douglas Community Gymnasium, is named after a former teacher and coach at the two predecessor high schools as well as a 1994 inductee to the Nova Scotia Sport Hall of Fame. The motion to name the gym in his honour was spearheaded by two former students.[12] Douglas passed away in 2008.[13]

The 450-square-metre (4,800 sq ft) cafeteria is called the Portia White Atrium, named after a Nova Scotian singer who achieved international fame and performed for Queen Elizabeth II, was featured on a postage stamp, and is the namesake of the Portia White Prize, awarded to established artists within the province. It is a soaring, airy, glass-clad structure that also serves as the entrance to the auditorium. It is topped by a green roof, visible from Citadel Hill.

The 280-square-metre (3,000 sq ft) school library is named after the Kinsmen, who also made a large donation towards the auditorium completion.[11] It currently contains about 10,000 books as well as 15 computers available to students.[14]

A shell was built at the time of construction for the roughed-in auditorium, which was completed in early 2011. The theatre was first used for the National Artist Program Gala, as a part of the 2011 Canada Games.

The theatre has been named the Spatz Theatre, after the Spatz family who donated money to the theatre. [15]

Built-in furniture, cabinetry, wall paneling, and much of the other interior finishing was custom designed by Chandlers Millwork of Charlottetown[16] and does not contain urea formaldehyde, commonly used in wood products.[17] Tables and chairs were furnished by Ven-Rez Products of Shelburne. 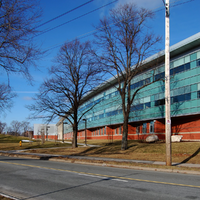 Citadel High School incorporates some architectural elements of the two high schools and the former community college. Six bas-relief sandstone carvings which were located at the entrances of QEH were installed in the new cafeteria. The carvings depict school-related activities such as science, sports, drama, and history. The new school also features four new sandstone carvings which were done by students of Citadel.[2]

Sandstone banding integrated into the brickwork of the new school was salvaged from the facade of St. Pat's, which was removed earlier as the anchoring for the cladding had deteriorated and became a safety hazard. Bleacher seating from the gymnasium at St. Pat's has been refinished to accommodate an additional 300 spectators in the new gymnasium.

Approximately 3500 glass blocks salvaged from the former community college has become part of the wall in the gymnasium and the original wooden main entry, which includes beveled glass, has become the entrance of the new school's library.[2]

An effort is being made to achieve Leadership in Energy and Environmental Design (LEED) Silver certification.[18] This "green building" rating system emphasizes sensible land-use, energy efficiency, and comfort. Examples of LEED elements in the project include the field sod roof of the cafeteria (a green roof), collected rainwater used for flushing toilets, extensive use of construction materials with recycled content, use of Low-E glazing and a reflective white ThermoPlastic Olefin roof membrane.

A 20-foot (6.1 m) tall stainless steel tree, a sculpture by Dartmouth artist Dawn MacNutt, was installed in the main foyer in early 2008. Entitled Together We Stand, it is suspended in the 3-storey atrium at the axis of the building and is made of steel wiring with leaves of aluminized polyester woven in Switzerland. Works of similar construction by the same artist can be found at Alderney Landing. The piece was originally located in the lobby of the Infirmary building at the nearby Queen Elizabeth II Health Sciences Centre until renovations there necessitated its donation to the school.[19][20]

The walls along the school corridors are lined with a single band of porcelain square tiles, each featuring a small drawing done in raised paint, by students of St. Pat's and QEH during the 2006–2007 school year. Also, FTW.