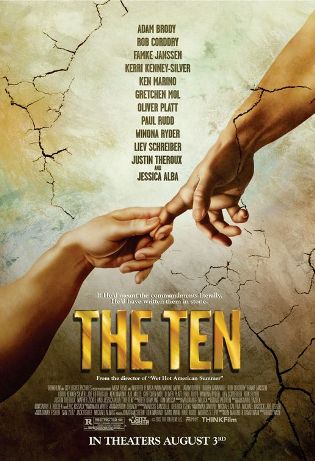 Ten stories, each inspired by one of the .
* (Thou Shalt Worship No God Before Me)
A guy () who becomes a celebrity after falling out of a plane and becoming permanently embedded in the ground. After a swift rise to stardom, he becomes prideful and arrogant, referring to himself as a god. His career falls apart and he loses everything. His fiance () leaves him for a TV anchor man.

* (Thou Shalt Not Take the Lord's Name in Vain)
A librarian () who has a sexual awakening in with a swarthy local () who turns out to be the real Jesus Christ. She eventually settles down and marries her coworker (), but is secretly reminded of her fling with Jesus whenever her family prays before a meal.

* (Thou Shalt Not Murder)
A doctor () who kills his patient by leaving a pair of scissors inside her abdomen during surgery. Despite expecting the charges to be dropped because he left the scissors in "as a goof", the judge and jury sentence him to life in prison.

* (Honor Thy Mother and Thy Father)
A white mother () who enlists an impersonator () to be a father figure to her black children after telling them the actor turned California governor is their biological father. It is revealed that their father is in reality , but they decide to keep the Arnold impersonator as part of the family because despite not being able to imitate Arsenio, he can also do a pretty good impression.

*(Thou Shalt Not Covet Thy Neighbor's Goods)
A police detective () who covets his neighbor's machine. After continuously buying additional CAT Scan machines to one up each other, both of their wives leave them. After hitting rock bottom the two neighbors reconcile and go out for a drink. Meanwhile a disaster at a nuclear power plant leaves a busload of school children in need of several CAT Scan machines. They arrive at the neighbors' houses but the doors are locked and the two men are at the bar, so all the children die.

* (Thou Shalt Not Covet Thy Neighbor's Wife)
A prisoner () who desires a fellow inmate's "bitch" for his own.

* (Thou Shalt Not Steal)
The woman (Winona Ryder) from the first story, having recently married the TV anchor man, falls in love with a ventriloquist's puppet, steals it and runs off to have a romantic relationship with it.

* (Remember the Sabbath and Keep It Holy)
The husband from the second story (A. D. Miles) skips church with his family to get naked with his friends and listen to .

* (Thou Shalt Not Commit Adultery)
Jeff Reigert () presents all of these stories to the audience, while struggling with his own moral dilemma: having to choose between his beautiful wife () and his also beautiful but somewhat younger mistress ().

* as Kelly LaFonda
* as Liz Anne Blazer
* as Stephen Montgomery
* as Gretchen Reigert
* as Jesus
* as Marc Jacobson
* as Ray Johnson
* as Jeff Reigert
* as Gloria Jennings
* as Duane Rosenblum
* as Harlan Swallow & Gary
* as Dr. Glenn Richie
* as Beth
* as Louis La Fonda
* as Bernice Jaffe
* as Oliver Jennings
* as Police Lt. Flarn Bairn
* as Abe Grossman
* as Scotty Pale
* as Marty
* as Fielding Barnes
* as Paul
* as Sally/Callie
* as Bob
* as Tony
* as Greg
*Arlen Escarpeta as Todd
* as Stanley
* as Nancy
* as Big Buster
* as Rebecca

*Gretchen () says she is now dating Jim Stansel when Jeff () goes to see her. Jim Stansel is a name of an old co-worker of Wain's father used by Beth () in Wain's when she tries to go learn about astrophysics to impress Henry (). She says "she has to go meet Jim Stansel".

*Bob () is seen during the "Remember The Sabbath and Keep It Holy" story explaining 's using the same dialogue from the very first sketch by The State in which, Garant explains the album/movie to little children at a birthday party.